In a new "Road to 2020" corporate presentation, the company outlined a number of business strategies it believes will boost revenue in the long-run.
Chris Kerr
News Editor
May 16, 2017

Sega intends to revive some of its oldest titles in a bid to secure its future. In a new "Road to 2020" corporate presentation, the company outlined a number of business strategies it believes will boost revenue in the long-run.

Among those was a commitment to revive major IPs and give them physical releases, although the company didn't indicate which franchises it'd be bringing back .

Sega also wants to expand its existing game roster by purchasing new PC franchises it feels will find success in North America and Europe. Beyond that, it plans to boost profits in the packaged games field by more effectively usitlizing its various development engines.

In the digital sector, the company understandably hopes to unearth more global hits, and believes the way forward is to develop and sustain "next generation" titles to maintain profits in the long-term.

If all goes to plan, the Japanese outfit expects to see revenue in its video game wing rise by roughly 50 percent to 305 billion yen ($2.68 billion) by 2020, with operating income almost tripling to 32 billion yen ($280 million). 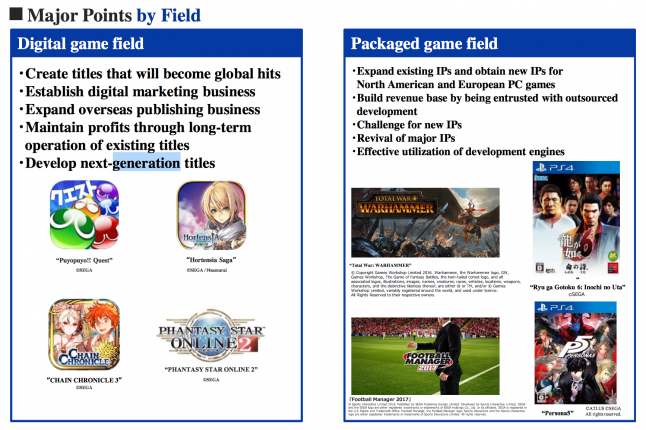