Sales up at Sony as PS4 software exceeds expectations

Sony has released its financials for the first quarter ended June 30, 2018, and rising PS4 software sales have been fueling growth in the company's games division.
Chris Kerr
News Editor
July 31, 2018

Sony has released its financials for the first quarter (Q1) ended June 30, 2018, and rising PS4 software sales have been fueling growth in the company's games division.

Sales in the Game & Network Services segment increased by 36 percent year-on-year to 472.1 billion yen ($4.22 billion), while operating income more than quadrupled, rising to 83.5 billion yen ($747 million) during the same period.

Company CFO Hiroki Totoki explained that upward swing was primarily due to an increase in PS4 software sales, including digital sales made through the PlayStation Network.

He revealed that Sony's blockbuster first-party title, God of War, has been exceeding expectations, and touted the positive performances of the company's third-party roster.

Looking at hardware, PS4 sales are currently doing better than expected, with Sony having sold 3.2 million units during the first quarter -- which is roughly in line with the 3.3 million units its shifted during Q1 2017.

Though that represents a small decline, Sony was actually expecting console sales to take a more significant hit, and has now upwardly revised its full year PS4 hardware sales forecast from 16 million units to 17 million units.

With software sales on the up and hardware holding firm, the Japanese outfit has also increased its sales and operating income forecast for its games division to 2.18 trillion yen ($19.5 billion) and 250 billion yen ($2.24 billion) respectively.

Outside of the games division, the company as a whole reported an increase in both sales and profits for the quarter, with sales rising by 5 percent year-on-year to 1.95 trillion yen ($17.4 billion) and profits increasing by 180 percent to 226.4 billion yen ($2 billion). 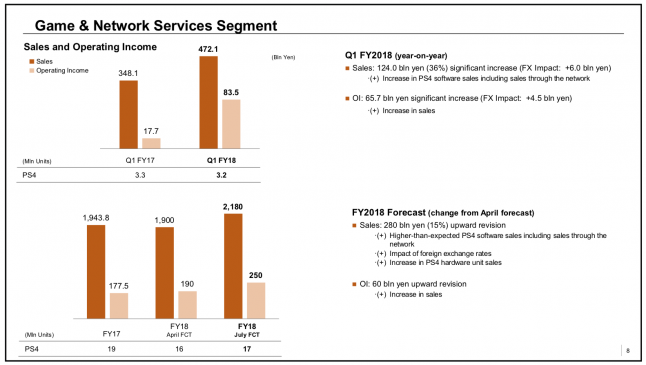