The mobile title had earnedÂ around $35 million as of June this year --Â meaning it's pulled in another $15 million in the two months since.Â
Chris Kerr
News Editor
September 10, 2018

As reported by Sensor Tower, the free-to-play title launched on the App Store and Google Play in November 2017, and had earned around $35 million as of June this year -- meaning it's pulled in another $15 million in the two months since.

The lion's share of that cash came from Japan, with players in the region accounting for 81 percent of that lifetime spend. The United States was a distant second, representing 14 percent of revenue worldwide.

As for how Pocket Camp compares to Nintendo's other mobile morsels, (as the chart below shows) the animal-laden campsite sim took longer to reach $50 million than both Super Mario Run and Fire Emblem Heroes -- the latter of which crossed that milestone in just 20 days.

Indeed, Fire Emblem Heroes has earned over $400 million since launching in February last year, and seems to be carrying that momentum forward. 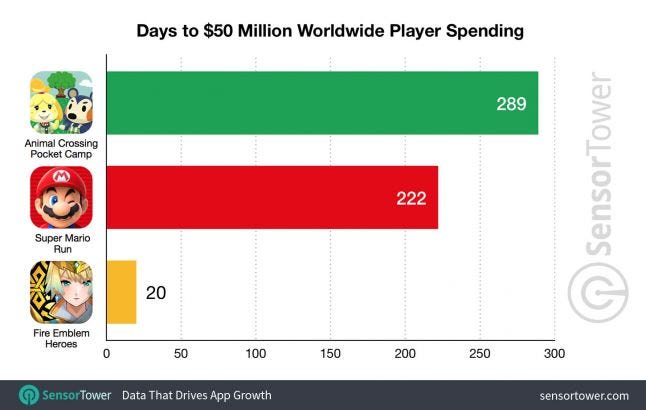