Report: 74% of all Unity mobile game installs are on Android

Unity reports that roughly 74 percent of the 2.5 billion Unity game installs it measured worldwide across 1.1 billion unique devices in four months of 2015 were on Android devices.
Alex Wawro
Blogger
September 21, 2015

Android continues to be the dominant mobile game platform in terms of installs, at least in Unity's eyes; the firm reported that roughly 74 percent of the 2.5 billion Unity game installs it measured worldwide across 1.1 billion unique devices in four months of 2015 were on Android devices.

Apple's iOS came in a distant second, hosting roughly 17 percent of Unity game installs during the same period. The data comes courtesy of Unity's first-ever mobile metrics report (excerpt embedded below) and suggests that game adoption on Android continues to outpace iOS around the globe -- though iOS apps tend to generate more revenue from in-game transactions than those on Android.

The download discrepancy evinced in Unity's report (published during the company's Unite Boston conference, which runs today through Wednesday) is especially intriguing in light of a recent report from analytics firm Fiksu suggesting that mobile devs pay nearly double for downloads on Android vs. iOS, due in part to Apple's efforts to overhaul the Games section of its App Store and improve discoverability.

For more mobile analytics data from Unity, check out the full report for yourself. 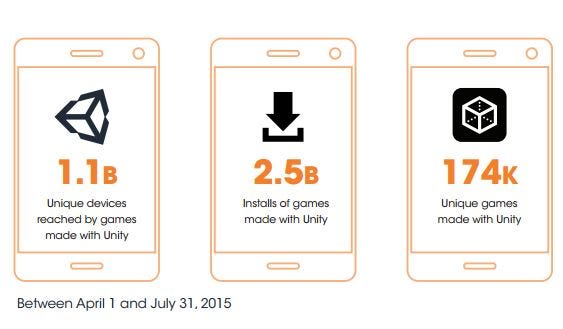