Nexon continues its assault on the Western market with a console-like PC MMO, Vindictus , which marries action gameplay with the microtransaction framework and online gameplay knowhow the Korean studio is most famous for -- and director Eun-Seok Yi explains it all to Gamasutra.
Christian Nutt
Blogger
December 20, 2010

[Nexon continues its assault on the Western market with a console-like PC MMO, Vindictus, which marries action gameplay with the microtransaction framework and online gameplay knowhow the Korean studio is most famous for -- and director Eun-Seok Yi explains it all to Gamasutra.]

Nexon slipped into a position of leadership in the U.S. market by exporting its Korea-developed and targeted titles, along with their free-to-play, microtransaction-based business model. Soon, thousands of teens were playing Maple Story before most in the game industry had even heard of it.

But the company is continuing its focus on the market with new development. While there have been stumbles with Kart Rider's no-go launch and the middling popularity of ultra-cute MMO Mabinogi, the publisher and developer has come back with a new wave of titles.

One of the most promising, and most obviously palatable to Western audiences is Vindictus [YouTube trailer]. With realistic yet stylized graphics and action-RPG mechanics in an MMO framework, the game seems like it could be a hit on consoles as well as the PC.

But as Eun-Seok Yi, director of Vindictus explains to Gamasutra in this new interview, things are not quite so simple. Read on to find out more about why he chose an action gameplay style for this title, what he expects of its audience, and on working on a game targeted at multiple markets.

This game is developed as almost a console-style game, and I was wondering if you could talk about the thinking behind the game mechanics and how that relates to the audience.

Eun-Seok Yi: When the online games first started, there was the text-based game, and then the next generation of that was the graphic MUD, but it was still very text-oriented. Now we're at the MMORPG, and sometimes it still feels like you're not actually in a battle. You're just dealing with the UI.

The overall trend of the games is that interactivity is going up; they're very interactivity-oriented. I think the online game trend is trying to make the game look like what you see is what you get. You're given exact interactivity with the environment and not the UI. So I think that the next generation of online games will be very action-oriented and fully interactive, and that was my approach as well. 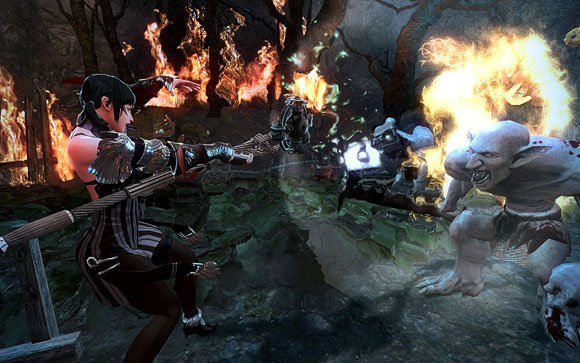 There's been some discussions of who the audience for games like this is. Is it young kids who are growing up and moving straight to PCs? Is it going to attract people away from consoles? Who do you see as the player of this game in North America?

EY: There is no exact target as you categorized, but if we had to categorize it it wouldn't be for such young audiences since the game itself is very mature. It is targeted for an older, more mature audience. Since the game is very intensely action-oriented and an MMO, you interact with your friends and whomever. Instead of seeing the game as targeting certain platforms or PC or console users, I thought of it as whoever wants to have this action game with friends experience -- those people are our target.

I know that you had worked on Mabinogi, and there was an announcement that it was going to come to the Xbox 360, but that didn't happen. I have the impression that it was because of the free-to-play business model not being supported. I would think otherwise that a game like this -- this game in particular -- would fit really well with that. So I guess you're still restricted away from that market right now?

EY: The choice was not because of the business model but because of the nature of the game. Of course, [Vindictus] would be a good packaged game, but this is a game that needs to be constantly updated. We're continuing to create content, so even if we were to make it into a packaged game we would still have to feed the users updates through the internet. So it was less of a business model and more of the nature.

It seems you can't really do that on consoles. There's been very few examples. Final Fantasy XIV is not coming to 360 even though Final Fantasy XI did, and it's unclear why. It seems like the consoles are very resistant to moving into this space. Are you actually interested in going there if you could, or is it just something that you see as not even appealing because of the distance between what you want to do and what's possible?

EY: The console idea is definitely a possibility, but we're not close to the idea. We actually have been talking to Microsoft -- not very frequently, once in awhile. But, like Mabinogi, even if the technical issues are something that can be resolved, we have to work up the business model first, so that's the first hurdle in this.

You were talking about how games are becoming more what-you-see-is-what-you-get, and that is more action-based in effect; but specifically the South Korean industry doesn't have a lot of experience developing action games.

I was wondering if you are looking towards any examples from other markets or if you're developing your own style based on your own inspirations.

Though that was a 2D game, so it's a little bit different.

So from a development perspective, did you look at any sources, or is this about establishing the style of this game yourself with your team from scratch?

EY: In the Korean market, Dungeon Fighter kind of set a standard for action games, so there were many, many 3D games that were trying to make a 3D version of that successful game. Most all of those games were just an exact copy of DFO in 3D, but Vindictus had differences that were unique and more refreshing. That wasn't just a carbon-copy of a 2D game, so it was really well received in Korea. 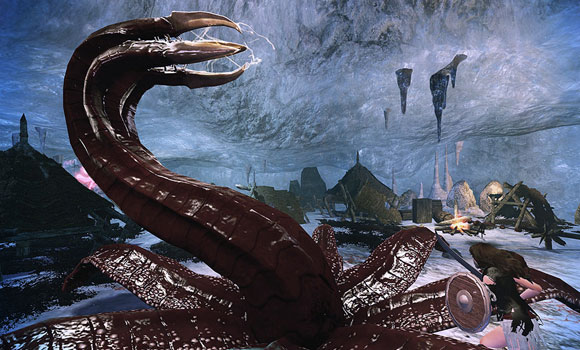 Is this game made for a global audience, or is it primarily in any one of the specific markets that your company is active in?

EY: Yes, the game is globally targeted because, in terms of visual style, as you may know, with some Asian games, Western audiences are still "That's not my type." Also, when we take Western games to the Asian market, they are like, "Oh, this is too tough and not very delicate." Asian users don't like it, and we were very well aware that the tastes of these two user bases is very different. We tried very hard and spent a lot of time creating this art style that appeals to both bases and makes it attractive.

EY: The differences are in the game mechanics, as well. There is a world of difference. For example, the typical American style is very badass; kill them all and shoot them up. It's very gunfight [oriented] and very tough. Whereas Asians like it too -- they like those types, but Asian users prefer melee types and very detailed gameplay, not so tough. Maybe crafting and that kind of stuff. So I think that there is a difference.

Asian users grew up watching Jackie Chan and Bruce Lee on TV, and they are very used to this type of choreographed, almost dance-like fighting style which is sometimes different from Hollywood, which is like bashing in somebody's face. So they have that kind of expectation from their games, too. And they do not shoot guns.

In light of some of what you've said, there's fundamentally different expectations. For example, for fighting styles, maybe it means you have to put in multiple characters: one that's very elegant and one that's more brutal. It seems like what players might expect out of the game could be addressed by putting in secondary gameplay mechanics.

EY: I noticed that American gamers are very focused about the worldview and scenario of the game, whereas Asian users sometimes don't really care; they just pass it off. So, as a developer, I'm very glad that they are serious about the story. Another difference of the Asian market might be that the countries within the Asian market tend to vary too. You notice that the Korean users' main focus is to get better than everybody else faster than everybody else.

EY: You mentioned Mabinogi, and we were thinking about that too because we noticed that, although it was very popular in Asia because there are a lot of people who like the Japanese animation style, it's not so popular in the Western world.

There is a definite fan base, but it's not a big fan base. When we started creating Vindictus, we wanted to make it global, so we gave up on the style. Maybe that is why there is a different fan base and wider fan base.

Also, I could be wrong, but I'm thinking that, with your older games, you were developing them primarily with the Asian audience in mind and probably not getting much feedback on them until after they'd been completed or close to completed. Are you getting more feedback from people in the U.S. offices about the U.S. market, doing things like focus-testing or anything like that?

EY: Working with Nexon America actively gives us feedback a lot. Nexon America does focus-testing with American users, brings them into the office for usability tests, sets up stations, records their first experience during the game, and really focuses on modifying the game to fit the North American user. When they get those test results, they forward it and discuss it with the Korean developers, who really try to tweak the game to match.

Also, Nexon America really gives us localization feedback: like this works in America, and this doesn't. Also, the developers go onto Nexon America's forums and sees what the users are saying first-hand. So we're actively getting feedback and actively working on those improvements. 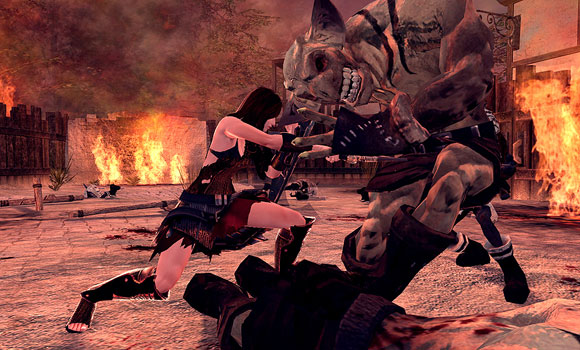 Do a lot of the developers on the team read English or speak English?

EY: I think a lot. (Laughs) A lot of them are good readers, but they can't write. (Laughs)

Most of your games have been a very big download, which works better in Korea because of all of the PC cafes but doesn't work as well with U.S. users; it seems like things are moving more to streaming, whether it's a small client download and streaming of the content or using Unity and being browser-based. Have you given thought to moving towards solutions like that? Have you implemented anything like that with this game?

EY: We are aware of the infrastructure issues, so we are thinking about those kinds of solutions and looking for ways to make the download less of a hurdle.