E3 could be getting a big overhaul next year, with organizer The ESA mulling over a rebrand that would see the show become a "fan, media, and influencer festival" in 2020.
Chris Kerr
News Editor
September 17, 2019

E3 could be getting a big overhaul next year, with organizer The ESA mulling over a rebrand that would see the show become a "fan, media, and influencer festival" in 2020.

As reported by GameDaily.biz, which obtained a pitch deck proposal for next year's show, the U.S. trade association has laid out plans to significantly change the format of E3 in response to publisher feedback.

The proposed revamp would see the expo bring in more influencers and celebrities to play games and take part in a variety of experiences, such as inviting athletes to play sports games in front of fans or hiring actors to compete in tournaments.

Those events would seemingly take place in eight "experience hubs"  scattered throughout the LA Convention Center's West Hall, as seen in the proposed floor plan pictured below.

ESA members are also keen to bring more consumers into the fold, and have approved an additional 10,000 gamer badge tickets, which would mean there could be up to 25,000 consumers at E3 2020. 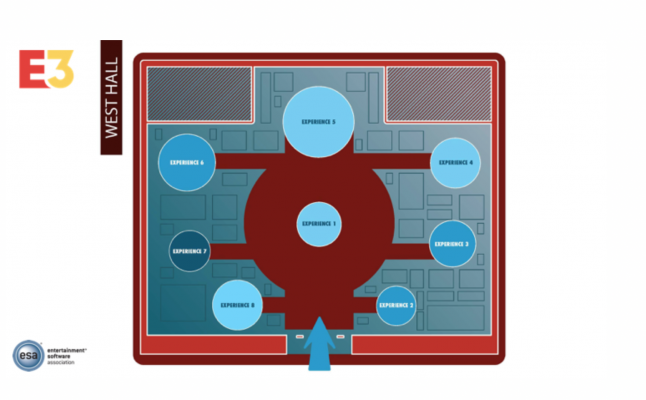 With that in mind, there's a chance the E3 Schedule could be amended to turn the first day of the expo into an industry-only event, before opening the doors to the general public.

To help counteract lengthy queues caused by the expansion, the ESA is also considering creating a digital app that would allow people to schedule demo appointments during specific windows -- similar to the FastPass system used by Disney at its theme parks.

Curiously, those that do choose to queue will be kept entertained by a "queuentertainment" system that will use data gathered through the app to send tailored marketing messages towards consumers as they stand in line.

There's more information about the proposed changes over on GameDaily, but at a glance it's clear the ESA is (at the very least) seriously contemplating how to expand and evolve the show's consumer footprint.

This wouldn't be the first big change to hit E3 in recent years, either. Back in 2017 the ESA made waves when it opened the show up to the general public for the first time ever, and last year both Sony and EA canceled their traditional press conferences, with the former skipping the show altogether.