Crypt Run launched on Kickstarter July 12th and ended August 11th with 180% of its funding goal. Let's talk about what worked, what didn't, and lessons learned for future campaigns.
Matt Hackett
Blogger
August 21, 2013 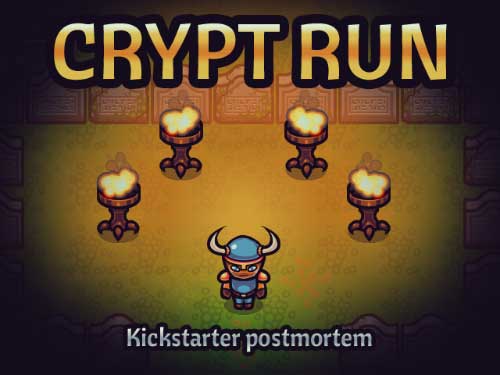 On July 12th of this year, Lost Decade Games launched a crowdfunding campaign for Crypt Run, our medieval fantasy hack ‘n slash game. The goal was $5,000 USD during a 30-day funding period. We made the goal (and many mistakes) during this exhausting campaign. Let’s talk about what worked, what didn’t, and what we’ll do differently next time.

There’s an overwhelming amount of information out there on crowdfunding best practices. I spent roughly a year with my ear to the ground, reading the occasional crowdfunding article and getting a feel for the current Kickstarter community. A great place to start is the Kickstarter School, but these best practices change so often and are so contextual that custom research is best.

The last few weeks before we launched our own campaign, I dug through dozens of bookmarks and spent hours per day reading up and educating myself. I’d say that this more than anything else contributed to the campaign’s success (except perhaps having a strong web-based demo). There’s no excuse these days: know your stuff!

Coming up with the budget for a game is difficult, even without complicating things with crowdfunding. Conventional budgeting approaches are not always applicable in the crowdfunding arena, where backers expect a game to be far along in development before they’ll consider funding it. This environment requires that a studio fund initial development upfront.

Our approach was to develop Crypt Run until we were almost out of money, then look to Kickstarter to see if we could gather a crowd who wanted us to continue development. Rather than estimating the budget to finish a complete game design, we decided to target a goal that we felt was within our reach, and design the rest of the game based on this yet-to-be-determined budget.

$5k seemed like a solid, reasonable goal that we could accomplish with our current network. This would allow us about one more month to develop Crypt Run, which is approximately how long the Kickstarter project itself took to create! So if we met our goal, we would break even.

This method of budgeting for what’s affordable instead of what’s ideal for the game certainly isn’t the optimal approach for all projects. 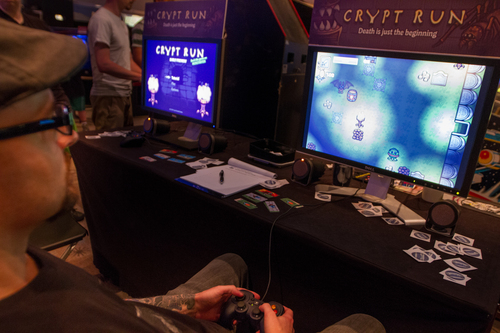 We launched the Kickstarter along with a live demo at California Extreme, an annual arcade and pinball expo in the California Bay Area. With hundreds of gamers playing Crypt Run over a 48-hour period, this undoubtedly contributed to our exceptionally strong opening weekend (58% of our goal pledged in just two days).

With about two weeks left to go, we also participated in Indie Prize Showcase, which is part of the very popular Casual Connectconference. While this conference was much more business-oriented, we definitely found new backers here, in addition to making solid networking connections.

Live demos can’t be beat when it comes to establishing a connection with an audience. There’s nothing better than shaking a gamer’s hand, then putting a gamepad in it. 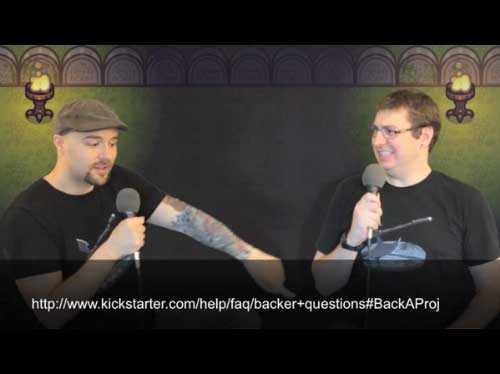 Our first video was largely live action, comprised primarily of us talking at the camera interview-style. We set up a rough script and took an entire day to film this video, complete with green screen and some fancy editing. However, it didn’t survive first contact with viewers; smart people whose opinions we respect suggested we ditch our talking heads in favor of more gameplay footage.

We saw their point, and made a new video that focused entirely on the game. The initial video was over 5 minutes long, and our final video clocked in at only 2:06. We feel that having a concise, game-focused video was one of the stronger aspects of our campaign.

I was really hustling for about 5 solid weeks, emailing everyone in the gaming press industry I could find. We did several interviews, updated our blog a few times per week, and managed to get some decent press coverage. We also launched a challenge a friend feature that allowed for asynchronous competitive multiplayer.

There were even some Reddit threads that did pretty well, although use Reddit at your own risk, as some Redditors can be unnecessarily hateful. The takeaway here is that being constantly noisy about a campaign can keep interest up.

Money was running out and we weren’t as far along as we’d hoped. We had plans for an ambitious and poorly-defined “unique death mechanic” that involved the game continuing after death. This feature was so incomplete it was almost cut from the Kickstarter demo entirely, but we wanted to provide players with a small taste of what was to come.

However, this incomplete feature left many gamers understandably scratching their heads. Was it just a corpse run, like in World of Warcraft? Was it another world, like in The Legend of Zelda: A Link to the Past? It wasn’t any of these things in our early preview – it was simply incomplete and left as a big question mark. Some people found this intriguing; others did not. 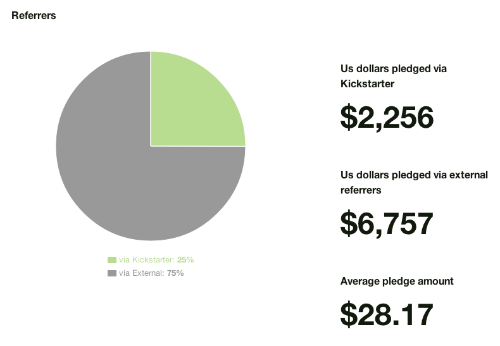 After the first week, our network of followers across Twitter,Facebook, YouTube, and even our podcast certainly knew about Crypt Run. If they were interested in pledging, they likely already had.

Constantly promoting was good, but we should have had a better plan for finding new backers outside of our previously-existing network. I’m still not entirely sure how to do that, but it’s clearly worthy of investigation.

We spent a lot of time talking about and planning the top tier rewards (everything above $100). However, nobody wanted them! I think it speaks volumes that even the very generous backers who pledged enough to afford them chose not to accept them.

Their very presence made things needlessly more complicated for the 300+ backers who did choose rewards. For future crowdfunding efforts, I’d shy away from offering any rewards priced above $100.

I suck at updating. Even at this moment I can’t tell you what kinds of updates gamers expect, or keeps people interested, or increases pledge amounts, or anything similarly valuable. I know now that there’s no reason not to update every single day, so that’s what I’d likely do in the future. The only problem is: I have no good ideas on how to deliver so many interesting updates!

In this vein, I also forgot the final edit to direct traffic to our Humble Store widgets. I had intended to edit the top of the project description with a prominent link to our new landing page where gamers can still preorder Crypt Run. When a Kickstarter project ends, it can no longer be edited, so this ship has sailed.

There will undoubtedly still be a trickle of traffic reaching the Crypt Run Kickstarter page, and since there isn’t a prominent call-to-action to preorder, I have essentially left money on the table. 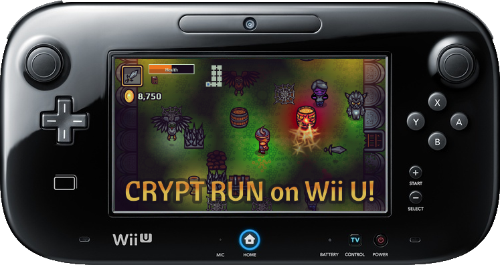 Crypt Run had weak stretch goals. They were poorly thought out from the beginning and were doomed to suck the moment I hit the “Launch Project” button. Some potential backers thought it was weird that, for example, the Linux stretch goal ($5k) was just as much as the game itself. An understandable complaint! The reason for this is that we paid for the initial development out of pocket, but we didn’t have Linux support in our tech stack, so we had to have more time to support it.

Our addition of Wii U support was handled particularly poorly. Based on severely incomplete information, we came up with an unrealistic goal of $13.5k for Wii U support. This turned off many potential Wii U backers, and probably hurt our chances of getting better coverage on gaming sites. And in the end, we still promised to deliver Crypt Run on Wii U (albeit, at a completely unknown date).

At the time, we felt that it would take $5k to make that happen, a number that we changed our minds about during the campaign. It wouldn’t surprise me a bit if some people viewed our budgeting incompetence as some type of greed, or were simply turned off by our inconsistency.

For a future project, I believe we’d avoid this problem entirely by simply not having any stretch goals. 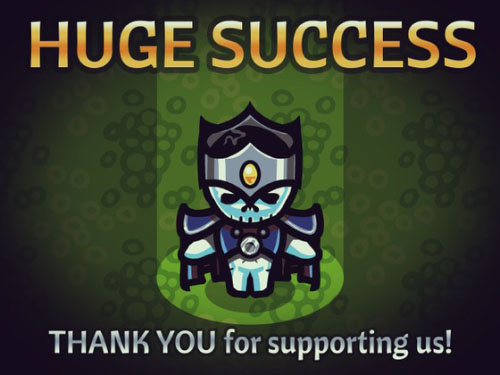 Crypt Run reached its funding goal on July 31st, 19 days after the campaign began. When the campaign ended, it was 180% funded at $9,013. That’s just over 9,000 and I gotta say, I really love our fans for that. Especially our good friends Joe and Rich, who awesomely lobbed us over some important milestones.

In my mind, the crowdfunding campaign was a complete success. On top of being able to spend more time developing Crypt Run, we also increased the size of our audience. I’m kicking myself for not counting our followers across the various social networks before the campaign began. It would have been great to know the exact numbers, but I’m pretty familiar with them, so I can provide a decent guess:

These numbers may seem low to people at larger companies, but to a small indie studio like us, this is a healthy dose of new fans. It’s clear that being noisy and focused for a solid month is beneficial not just as a funding tool, but also as a means to grow an audience.

Overall we’re very pleased with the results of our campaign, and quite humbled by the amazing support from our small but loyal fanbase. Crypt Run’s successful crowdfunding almost certainly sets the stage for another campaign from Lost Decade Games, but before we can even think about that, we’ve got a game to finish!