Two popular YouTubers have been implicated in a CS:GO betting scandal after it was revealed they own a weapon skin gambling site that's featured extensively on their channels.
Chris Kerr
News Editor
July 04, 2016

Popular YouTubers ProSyndicate (Tom Cassell) and TmarTn (Trevor Martin) have been engulfed by a Counter-Strike: Global Offensive (CS:GO) betting scandal after it was revealed they own a weapon skin gambling site that's featured prominently on their channels.

The site in question, CSGOLotto.com, allows users to gamble with their CS:GO weapon skins, which have significant monetary value and can be sold for cash on third-party storefronts.

Skins are turned into chips by the site, with values based on a variety of Steam Analyst-determined desirability factors such as novelty, rarity, aesthetics, wear quality, and pattern orientation.

Users can then wager their skins against other players in "game pools," before a slot machine style system picks a winner -- who walks away with every single skin in that pool -- at random.

CSGOLotto retains an 8 percent house edge on each round, meaning Cassell and Martin are directly profiting from a site they've repeatedly plugged.

To give you an idea of just how much money is being wagered on CSGOLotto and other sites like it, Bloomberg recently reported that around 3 million people bet $2.3 billion worth of CS:GO skins in 2015 alone.

It's a figure that shows the scale of the industry, and one that prompted one player to file a class-action lawsuit against Valve for allegedly profiting as a result of unregulated gambling operations.

For their part, both Cassell and Martin -- who have a combined YouTube subscriber count of well over 10 million -- have featured CSGOLotto in a number of videos with titles such as "HOW TO WIN $13,000 IN 5 MINUTES (CS:GO Betting)" and "WINNING BIG $$$$!! (CS:GO Betting).”

Until now, those videos might’ve seemed innocent enough, however research conducted by YouTubers HonorTheCall and H3H3 has revealed Martin and Cassell each have a stake in the company, and serve as its president and vice president, respectively.

The revelation that both parties don't just work for the gambling firm, but rather joined forces to found it, could land them in trouble for failing to follow the FTC's strict YouTube guidelines relating to the disclosure of interests and paid-for endorsements.

Adding more fuel to the fire is the fact that both creators have uploaded videos showing them winning large bets through the site, leading some to speculate they could have abused their positions to manipulate outcomes, thereby propagating misinformation in an attempt to pull in users.

After being called out, Cassell -- who's played fast and loose with FTC guidelines before now -- and Martin have professed their innocence, promising to be more transparent in future and claiming their ownership of CSGOLotto was never a secret.

"That isn't a secret, I don't know why this is being treated as breaking news. I enjoyed playing on other sites and saw ways to make improvements to them, so I put a team together and built my own site.

"Making accusations that my winnings on the site and reactions are fake simply because I own a portion of the site is unjustified. Every single game that I played was real, every single skin that I won or lost was real. So please don't throw around false accusations and slander."

Despite his assertions, some of the videos implicating Martin have since been amended with a disclaimer informing viewers of his "collaboration" with CSGOLotto. Other videos have been made private and can no longer be viewed by the public.

CSGOLotto has now been flagged by Steam (shown below), which warns users attempting to log in that the site "may be engaged in phishing, scamming, spamming, or delivering malware."

For a comprehensive summary of events you can watch H3H3's excellent breakdown, or head straight to the source by checking out HonorTheCall's extensive research video. 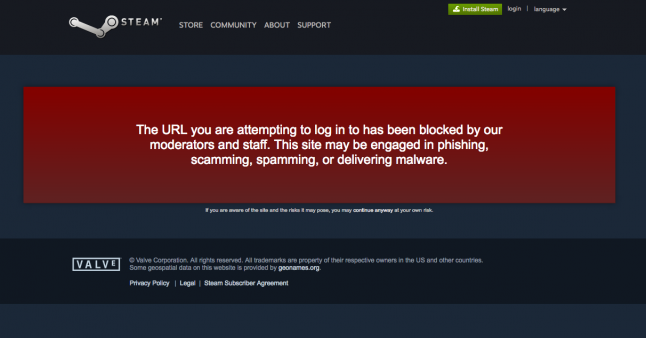