A brief dissection of how Overcrowd: A Commute 'Em Up was Greenlit in 7 days.
Alastair McQueen
Blogger
August 20, 2015 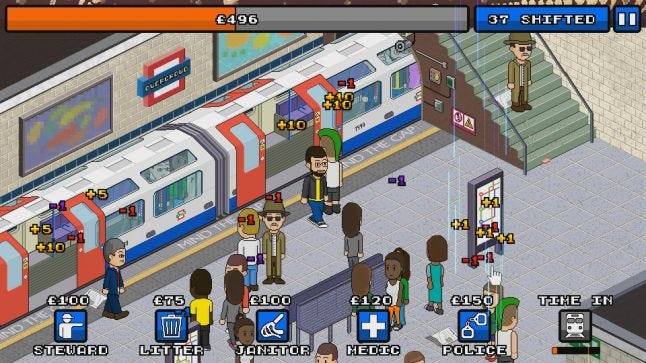 After a frenzy of emailing, tweeting and generally begging everyone I could think of for PR coverage, Overcrowd: A Commute 'Em Up has passed through Stream Greenlight. Overall, it took 7 days which I understand is quite a good thing, though not as amazing as it may once have been considered. Overcrowd garnered a pretty positive reception from the Steam audience, and there were a lot of nice comments made, and really very few negative ones. So what about the figures?

Steam Greenlight poses users the question: Would you buy this game if it were on Steam - Yes/No/Ask me later. The ratio ended at 53:43:4. According to the average figures Steam supplies you with this is a good result, as the top 50 average is the inverse at 42:58. The process was pretty nerve wracking, and because I have not released so much footage or screenshots before (in defiance of much sensible indie marketing advice), it was a huge relief to have a decent vote rate and to pass through quickly. 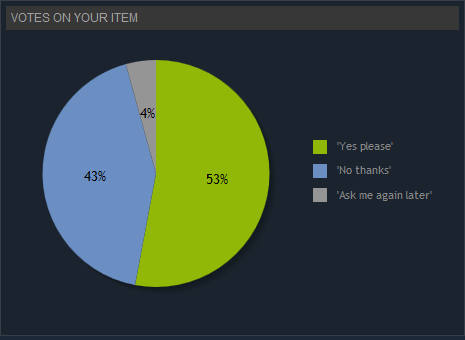 The relative ranking of your title on Steam changes constantly as games above you in the pile are periodically approved. Cumulative Yes votes placed Overcrowd at a rank of #43 before it was approved - at which point you have no ranking. Out of some 1500 games it was a great result, especially as there are some high quality games in the mix made by large teams. There is also a lot of dross too, it has to be said - but as a one man project I'm pleased to have got that high. 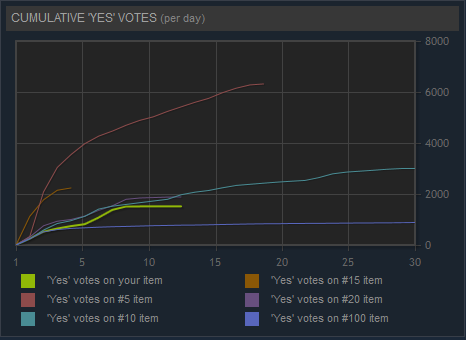 This graph is kind of hard to interpret, as you can see after 7 days votes ceased as the game was Greenlit. It's possible this was because of the positive Yes/No ratio Overcrowd got, but it's a closed system and the rules seem to be neither hard and fast nor fully understood.

It is well worth investigating how to best present your game on Greenlight. There are some good articles out there if you do your reseach - and of note is the ability to use bbcode to embed images for headings and other sprites and assets into your page. If you do this well you can make your page stand out significantly - without it your description is going to look a bit like a notepad document, and that doesn't reflect too well. You should also look into creating an animated gif - which I have found can be no more than 2 mb - to help your item stand out and generally look appealing.

Of course, Greenlight is primarily judged on your video trailer, and it goes without saying you should make this as high quality and impactful as possible! For those of us on a low budget, I found a good editor for a reasonable price through the website videopixie.

Something else that was perhaps a little different from the norm was that I openly dicussed and presented my development road map and my intention to go directly into Early Access. It's not so common from what I have seen - but I have tried to be transparent about where the game is, and what I intend in terms of next steps - including procedural station generation and other planned features.

Through the week, I made a few announcements to highlight these development goals, and also to highlight some of the positive press articles.

Some thoughts on PR

There are enough articles written about how to market an indie game out there, so I won't do an extended write up here, but will say a few points. Having a well written press release is useful. If you can't do it, you need to find someone who can draft your release for you, and it's possible this may require money.

In all, the game received some really nice write ups on a few little indie websites and blogs, and a few tweets/retweets of support, which all helped bring eyes to the page. Of particular note was a tweet from Introversion which brought a huge boost in traffic from essentially my "target market", just as visits to the page started to plateau.

To other developers without a PR budget (like myself), I would also suggest trying Games Press - a free news wire focusing on games that will get your release around to a few places - if they run it. You can see What The Press Says on the Overcrowd game website - but there are some pretty juicy quotes which should help with marketing down the line, and I'm very grateful to all those writers/tweeters who helped me! To other devs I can suggest keeping a list of coverage so that next time you have a release, you ensure writers who care about your game will get to hear more.

So what now? When you have been approved you are presented with the ability to sign up to Steamworks, along with plenty of information on how to do this. It's questionable whether leaving greenlight rapidly is actually of benefit. Sure you get your 7 day bragging rights, but at the same time, you're losing the exposure it brings over time - that said the page is still active and does continue to provide a place for people to engage who are interested in Overcrowd.

On the development side, the next step for me is to get the demo/early access out there. Steam also seems to have an ability to conduct closed beta's which is also something I'm looking at before wider early access.

There seems to be a lot of hate for Greenlight from some quarters, but for a newcomer like me, Greenlight has proven invaluable because of the huge audience exposure and critical feedback you can get for your project - all for a very reasonble $100.