Over a billion people will know about eSports in 2016, as audiences balloon

Probably everybody in the world knows about sports, but new research from analyst firm Newzoo suggests that awarness in eSports is expanding rapidly.
Christian Nutt
Blogger
May 11, 2016

A strange but interesting stat: By the end of 2016, over a billion people worldwide will be aware of eSports.

That number represents roughly one-seventh of the world's population and is no doubt dwarfed by the number of people who know about sports (aka: everybody) but it's still an impressive figure, especially when you consider just how recently eSports was considered a niche.

According to Newzoo, the analyst firm which published the stat, this year there will be 144 million "occasional" viewers of eSports, and 148 million "enthusiasts." Those numbers are only set to grow in the coming years, as you can see in the chart provided by the company and published below.

The company earlier predicted that eSports revenues would grow to $463 million by the end of this year, a 43 percent gain year-on-year.

That is likely why Activision Blizzard, for one, is going all-in on eSports. CEO Bobby Kotick recently said that "we're barely in the first inning of opportunity for games as organized sport," and "over the long term we view this as a tremendous opportunity to both celebrate our players and create a lot of value for our shareholders."

He outlined his ambitions for the space, explaining just how he expects the company will generate huge profits from people watching Overwatch, Hearthstone, and Call of Duty. 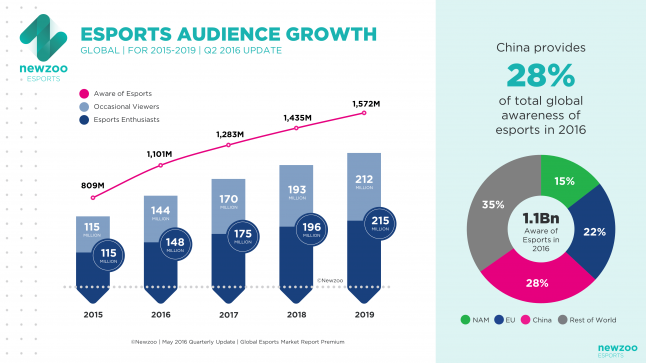