It’s worth understanding that the real estate imbroglio that is currently roiling the
Game Developer
Staff
July 17, 2017

I never thought I’d have to write the words “Final Fantasy housing crisis” in earnest, but 2017 is full of surprises.


Frustration over Final Fantasy XIV’s housing shortage has come to a head after two players angered a lot of others by buying up 28 homes in the land-strapped massively multiplayer online game. Now, players are questioning whether virtual housing is an equal right or a privilege meant for the rich and over-dedicated.

This has led to bitter recriminations between homeless players and the couple who bought up vast tracts of land using their alts. The problem is that there are around 2,600 housing plots for twice that many players on any given FFXIV server, and in an environment of artificial scarcity it looks rude to take up so much land just for you and one of your friends.

The obvious solution is for Square Enix to build more housing and do so quickly. But it’s worth understanding something: this imbroglio was bound to happen. It was eminently predictable and should have been avoided from the start. 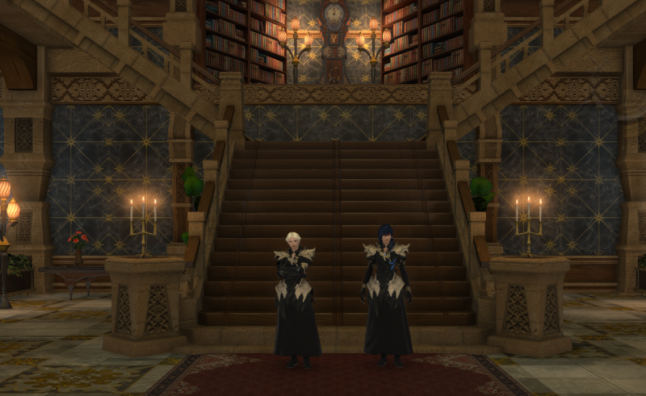 You get the players you design for.

"The real estate imbroglio was bound to happen. You get the players you design for."

One half of the 28-plot owning couple, whose in-game name is Seraph Altima, wrote a lengthy, complaintive, sometimes insightful Tumblr post defending her decisions. If you like MMOs, it makes for interesting reading.

What’s useful to note is how real Altima makes her experience sound. For instance, when talking about hopping from server to server, looking for one with a lower population, she says “and I finally felt like… I had been holding my breath without knowing, and finally I could breathe.” It’s a pointed little reminder to developers that their virtual worlds have a meaningful impact on the lives and psyches of players, a lesson I’ll return to.

The rest of the letter tells the story of how Altima met her in-game partner and slowly built up a stable of plots and homes with her over the years, but the tone of much of it is defensive and unlikely to take the heat out of the situation.

"The situation is a pressure cooker entirely of Square Enix’s own making."

A Twitter user sneered that Seraph “comes off as a typical Republican asshole.” Certainly the bootstrap rhetoric at the letter’s end comes off as preening and selfish. But such a callous dismissal, in addition to being wildly unsympathetic, also ignores a simple fact: these circumstances were created by forces far more powerful than Seraph Altima and her friend. If there’s any cruelty in Altima’s self-defense, it is matched by the cruelty with which she has been scapegoated; both of which are the results of a pressure cooker entirely of Square Enix’s own making.


“I like this story. It’s very 'capitalist' vs. 'socialist' in nature, and it’s fascinating to see that play out in an MMO as opposed to real life.”

Perhaps. But as with the real world expressions of those ideas, they emerge in a changeable social context.

In short, if you design a game with painfully artificial scarcity, you’re engineering circumstances that’ll see your players at each other’s throats in no time. Social dynamics are not easy to control, and toxicity can be tough to hem in, but something this obvious is eminently predictable. If you make housing scarce, people are going to fight about it, and rarely in constructive ways.

In her landmark study My Life as a Night Elf Priest, anthropologist Bonnie Nardi observed that “we cannot forget the ‘hand of God’ that is the software artifact and the power of designers to shape activity.” She goes on to use an example from the MMO Lineage which permitted even high level players to go into low-level areas and kill their newbie counterparts. This led to other groups of players who would organize and form a kind of patrol to stop high level players from ganking in this way, which social scientist Constance Steinkuehler calls “the mangle of both designed-in technologically instantiated rules and human intentions.” In other words, the weird and wonderful brew that emerges when players engage with your designs.

"If you permit ganking, you are seeding a toxic subculture in your game; player vigilantes who emerge to combat that subculture are also a result of that choice."

Nardi was not content to leave it there, however. She reiterated that “a world in which ganking is possible was precisely the world intended by designers, and it was what they encoded into the rules.” She made the point that any “mangle” of player innovation and design intention was still, to some degree, heavily determined by what the designers intentions are.

In short, as I said, you get the community you design for. If you permit ganking, you are seeding a toxic subculture in your game, without question; player vigilantes who emerge to combat that subculture are also a result of that choice. That is the social dynamic you’ve created with your design, locking your players into a given sociological reality.

Back to FFXIV now, I’d argue similarly that all the bad feelings stemming from this housing crisis must be laid at the feet of Square Enix. They created the circumstances in which something like this was bound to happen, and the bitterness and unkind words being exchanged among their players right now is down entirely to an easily avoided design choice.

Scarcity is the mother of prestige in an MMO: the rarer an item is, the more prestigious it is to have it, and the greater marker it is of a player’s success and dedication. But with something like housing, there are ways to provide that (expensive extensions, rare decorations) without making the scarce object the house itself. There’s a reason most MMOs with player housing tend to instance them, after all, permitting infinite copies of a given home.

"There are ways to gate in-game systems such that they reward dedicated play without unfairly shafting people."

This keys into an old debate in MMOs. Rather ugly neologisms were coined when World of Warcraft redesigned its raids to be more welcoming to smaller groups. The purple items that such players won were sneeringly called “welfare epics.” In a way, Altima echoed this when defending her housing purchases. “Not everyone needs everything in-game,” she told d’Anastasio in an interview. “For example, not everyone deserves the Savage raiding mounts if they don’t do Alexander.”

But this isn’t a zero-sum choice between ruthlessly enforced scarcity and simply handing out cool things to players. There are ways to gate in-game systems such that they reward dedicated play without unfairly shafting people. After all, if all housing on a server is bought up, it doesn’t matter how long and hard you play, or how much gil you acquire. How, then, does possession of a home correlate to player skill? Instead, it’s more a matter of being at the right place at the right time--and that will always lead to resentment and insoluble debates like this one.

This is not to say that Altima and her most vociferous critics are bad people who were attracted to a bad system. Rather, it’s that their behavior is structured by that system. They’re responding in predictable ways to their environment.

As of this writing, Square Enix is building more player housing, which is all to the good. But this mess should serve as a warning. Unless you as a game developer have always dreamed of creating a thunderdome for your players where they harass one another ad nauseam over in-game drama that will inevitably spill over onto your doorstep, think very carefully about how people in groups will organize around your designs.

It’ll save us all a lot of heartache.