Oh!, no?, the attack of the Android pirated copies

How fast your latest game can be pirated?
Juan Belon Perez
Blogger
April 01, 2014

Well, I adquired a Pro license of Unity,two months ago I started to think of a new game development with this guy R-TypeX..., a gamer suggested me to make a zombies game. So we did Silver Zombie.

This is the game teaser:

Soft launched in Google Play, in the first day there was a purchase from USA, this person use 10 minutes and returned the game (refunded it), in that time, the game was copied and in the next hours, the same person uploaded the game to a downloads site...from this moment, the links ,tweets, facebook posts started to grow like mushrooms on a rainy day: 20 new results/hour in google search for ["Silver Zombie" Android] for illegal copies...that was crazy, now the number is 12000 results approx...you can find our game in forums of all kind,..also,and as a reason for derision its users are scoring the game very low on their downloads forums... XD

BlackBerry Appworld, Apple AppStore, Windows Phone, Amazon ...they all have its own DRM to try to avoid the copies but...The discussion here is, is it good to get your game pirated? if people liked it, should they pay for it?

Some of you can argue that ,if your game is good enought ,piracy should not bother you, but if someone that can actually pay for the game, searchs for it in the internet and found an illegal copy, what stop this use from get the free version?

I was told to add ads to the game, so although the game is pirated, you still receive benefits from ads, but i dislike ads, then , should I just close my mouth?

I just wanted to measure and analyze how fast these pirate-networks replicate content.

This is a table of 6 days since the launch.

Organic search data is the results from search engines, the info about the game mixed with other content over the net.
Pirated links: search engines can determine what is the actual information (not copy-paste) and this number can vary so I have balanced the data.
Estimated downloads: a statistical measure counting posts views, comments and number of downloads webs files.

Look at the graphic... 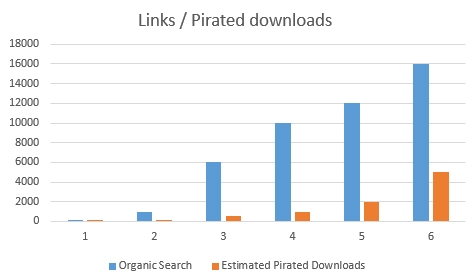 The more tweeter, blogs, facebook posts, and youtube videos, the more people will know of the game, only 20-40% of the downloads sites also contains the link to the original game. 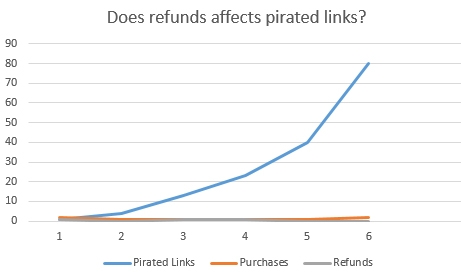 Looks like that someone needs to do the dirty job, once the game is purchased-downloaded-copied-refunded, then there is no more need to do the process again because other people will copy the first one from the network...

We can think, if the game were free, maybe it should not attracted people, but what make them to want to download first from a no-secure web?

You may be well aware that the software in these sites are not safe, so, if you download a game, it could be modified, ...sometimes they just change a value so the new apk will show the hacker ads, not from your ads account.
Sometimes, the hacker can change the game and break it, like this guy...the point here is, that device runs perfectly the original game, so, has he introduced malicious code inside and broke the game?. Probably.

Looks like in 3 days the numbers are going exponential because people copy other people.

I have tried to avoid this writting to some of them and asking , begging them for remove the links, but there are like 2/10 responses, so, can we learn a lesson from this?,
Is Android the platform where people release free games with ads?...
Other people should release a fake crack / software that prevent others to be the first ones downloading the original copy and distributing it. It works too. But do we need to do this crazy things?

But if you want to enter the fight like I wanted, first you need to register the game legally, because when you ask downloads servers to remove the link (even your trailer in youtube with pirated links), they will ask you for the copyright, they will not proceed until they receive that.

For example:
"For MediaFire to be legally compliant, we must have a completed DMCA Take Down Notice.
(For more details on the information required for valid notification, see 17 U.S.C. 512(c)(3).)"

I would like to know, if each time a refund op appears, it indicates new pirated copies in its way...