With pre-orders finally open, the price of the Oculus Rift has been revealed to be well above Oculus founder Palmer Luckey's previous estimate of around $350.
Chris Kerr
News Editor
January 06, 2016

With pre-orders finally open, the price of the Oculus Rift has been revealed to be well above Oculus founder Palmer Luckey's previous estimate of around $350.

A screenshot taken from the Rift pre-order process has confirmed the headset will in fact retail for $599 in the U.S., or £499 and €699 for those of you in the UK and Europe.

Speaking to Road To VR earlier this year Luckey explained that, while the price will be "roughly in that [$350] ballpark, it's going to cost more than that."

The $599 pre-order package includes a Rift headset, Oculus Remote, cables, Xbox One controller, a sensor, as well as copies of EVE: Valkyrie and Lucky's Tale.

"Integrated display virtual reality headsets have never before been manufactured at scale and the pricing reflects some of the inevitable challenges involved in this process," opined IHS Technology analyst Piers Harding-Rolls in an email to the media. "It will take time for the manufacturing cost base to come down for the Rift as we expect early sales volumes to be in the hundreds of thousands and not in the millions."

The analyst went on to note that the inaugural consumer version of the Rift is being sold chiefly to people who typically spend $400-$500 every other year on new graphics cards and other PC hardware upgrades, then predicted that Sony will launch its own PlayStation VR headset at a lower price later this year.

Oculus has listed the expected ship date as April 2016. Rifts are currently limited to 1 per customer. 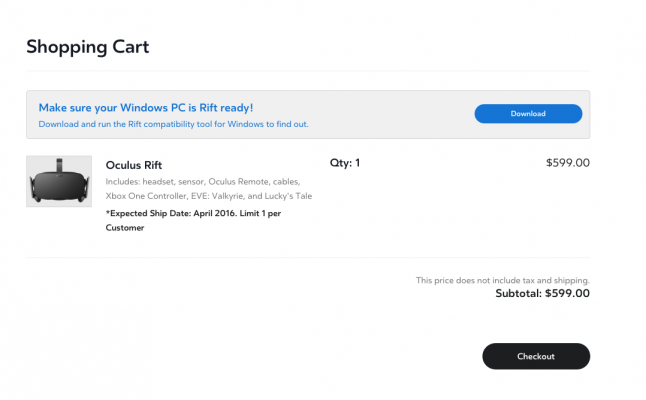