"Traditional sports have grown slowly through the decades, with all but the NFL guilty of plateauing in the last 20 years. eSports exhibits the traits of a classic digital success story."
Chris Kerr
News Editor
December 18, 2015

A new report by New York City-based creative agency Sparks & Honey predicts that by 2017, eSports will be attracting more viewers than the most popular sports event in North America, the Super Bowl.

Although it could be deemed unfair to compare a year's worth of eSports events to one, albeit popular, game of football, it's been decades since any other sport came close to rivaling the NFL's flagship event, which had an average audience of 114.4 million this year. The Super Bowl's viewership has outstripped viewership of every other major sporting event in the U.S.--such as the NBA Finals and the MLB World Series--by a country mile since the 90s.

The fact that eSports as a whole can be mentioned in the same sentence as the Super Bowl is thanks to the meteoric rise of competitive gaming. For example, in 2014, 27 million people tuned in to watch the League of Legends World Finals online. By 2015, that number had risen to 36 million, while a 40,000 seat stadium in Korea was filled with people who'd opted to watch the event live.

Over in the U.S, the recent ESL One tournament was a sell out, with around 18,000 spectators packing into the Madison Square Theater to see the world's best Defense of the Ancients 2 teams in action.

Looking at the progress of eSports on a global level, Sparks & Honey reports that 55 million fans tuned into championship events across eSports' five most popular games (World of Tanks, Counter Strike: Global Offensive, Smite, DotA 2, and League of Legends) in 2014, showing viewership had increased by 643 percent since 2012.

Taking all of that information into account, Sparks & Honey now predicts that due to expanding broadcast channels, the emergence of formalized organizations, and a potential global audience of 1.4 billion, eSports viewership will eclipse that of all other sports in the U.S. within two years.

"Traditional sports have grown slowly through the decades, with all but the NFL guilty of plateauing​ in the last 20 years. eSports exhibits the traits of a classic digital success story, exploding out of the gates as fans are able to connect to the sport – and one another – from anywhere in the world," reads the report.

"The eSports audience growth trajectory is unprecedented in the modern era of competitive sports. We project that the eSports audience will continue to grow exponentially, driven by increased awareness of the industry, traditional TV broadcasts, larger events, more robust platforms and frequent eSports title releases." 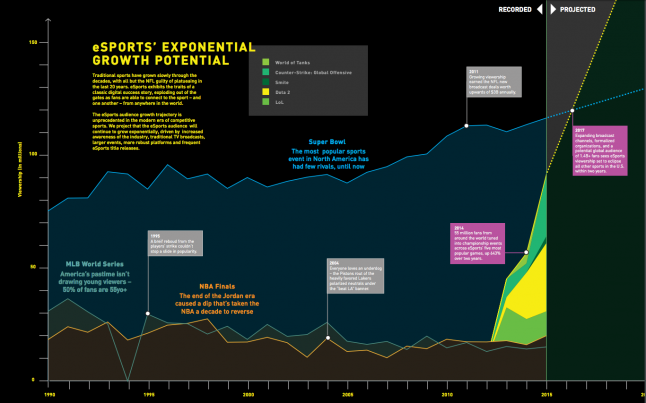