"The idea of delivering our DLC this way was greatly influenced by the goal of having a unified community."
Chris Kerr
News Editor
May 03, 2016

Anyone planning on picking up Uncharted 4 later this month won't have to worry about the added cost of a season pass or paid DLC.

In a new post over on the PlayStation Blog, the game's lead designer, Robert Cogburn, shed some light on Naughty Dog's new multiplayer mantra, explaining the team refused to "fragment" their community by releasing a stream of pricey content.

Instead, the studio has promised that all future multiplayer maps and modes, along with gameplay and vanity items, will be released for free through the in-game store.

It's a change in direction for Naughty Dog, which previously asked players to pay for fresh content, and an unusual model for a triple-A game -- with most big-hitters, such as Star Wars: Battlefront and Call of Duty, opting for a structured, and often divisive, season pass model.

After deciding to go against the grain, the studio spent some time mulling over how Uncharted 4 multiplayer should work, and eventually nailed down a new "multiplayer DLC philosophy" founded on four key ideals: fairness first, an evolving experience, content for everyone, and a unified community.

"We strongly believe that players must be on an even playing field. To do this, we made relics, a currency that can only be earned through gameplay and will be able to unlock all DLC, present and future," wrote Cogburn, referring to "fairness first."

"We will be putting future gameplay items ranging from mysticals to boosters into DLC gameplay chests. Each chest will contain new gameplay items."

By also ensuring the experience continues to evolve thanks to regular updates, and, more importantly, all additions are well-balanced and available for free, Cogburn is hoping Uncharted 4's players will feel part of a bustling "unified community" centered around engagement and shared experiences.

"The idea of delivering our DLC this way was greatly influenced by the goal of having a unified community. Maps and modes will be available to everyone on the same day. This will ensure that all players are kept together and experience new content at the same time," added the designer.

"Beyond our engagement with players through social media and our forums, we’ll soon introduce Cinema so that players can review matches and use a tool that will allow them to create custom Uncharted multiplayer footage."

For a comprehensive look at Naughty Dog's Uncharted 4 multiplayer plans, including a DLC roadmap, check out the complete blog post right here. 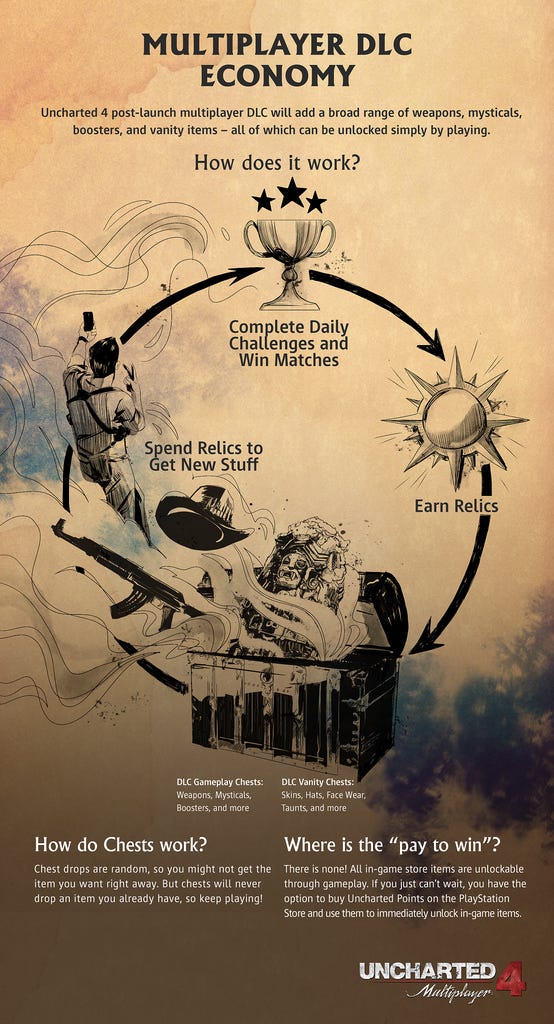