App Store revenue generated per activeÂ U.S. iPhone rose by 36 percent to $79 in 2018, with mobile games accounting for over half of that per-device average.
Chris Kerr
News Editor
February 12, 2019

Mobile games are still driving App Store spending over in the United States, according to analytics outfit Sensor Tower.

As noted in the company's latest report (via TechCrunch), App Store revenue generated per active U.S. iPhone rose by 36 percent to $79 in 2018 -- up from $58 in 2017 -- with mobile games accounting for over half of that per-device average.

More specifically, mobile games accounted for 56 percent of that average consumer spend, so around $44 of the total $79 spent per iPhone.

As the graph below shows, that means U.S iPhone owners spent 22 percent more on mobile games in 2018 than in 2017 -- when the average spend on video games was $36 per iPhone.

It also means mobile games continue to dwarf other app categories, with entertainment spending finishing a distant second with $8 spent per iPhone.

For more tidbits from the report, be sure to head on over to TechCrunch. 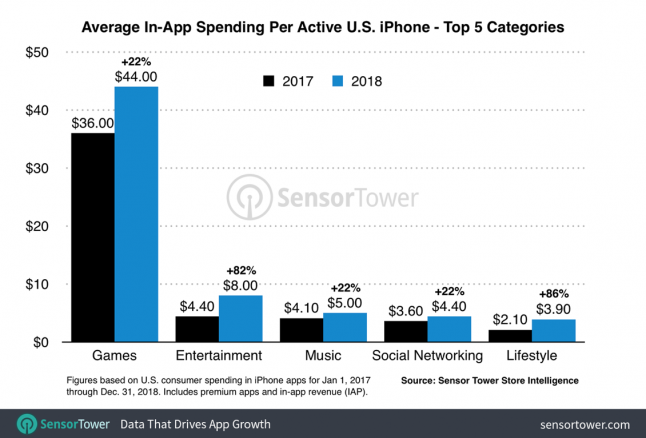