Miitomo: What's Nintendo trying to do with its first smartphone app?

So what's the deal with Miitomo? Christian Nutt takes a look at Nintendo's first app, and places it in context.
Christian Nutt
Blogger
October 29, 2015

If you haven't heard, months after it formally partnered with mobile dev DeNA, Nintendo has announced its first smartphone title: Miitomo. It's nothing that people had expected; it seems to be barely a game, and doesn't leverage the company's treasured IP, such as Mario or Zelda, at all.

Fans are predictably snarky; it's not even a game, really, but almost more of a gamified messaging app, it seems like. Take a look at this slide from the announcement: 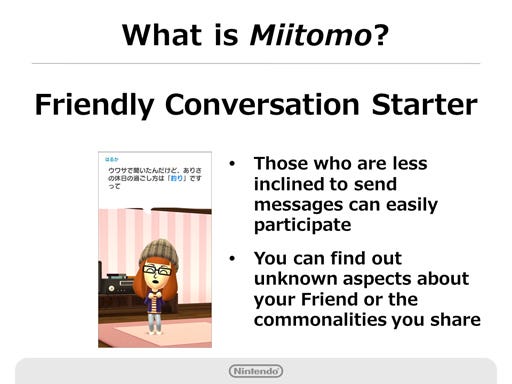 More interesting, in a way, is the market's reaction. Sure, this isn't something that Nintendo's core audience of Smash Bros. fans and Amiibo collectors wants, but a mainstream mobile audience? It seems plausible.

Yet it seems that investors were expecting the company to come out of the gates with its big-name IP, too; its stock has dropped nearly 9 percent in after-hours trading, since the news broke, after the Tokyo market close (it's not open yet, as of this writing.) 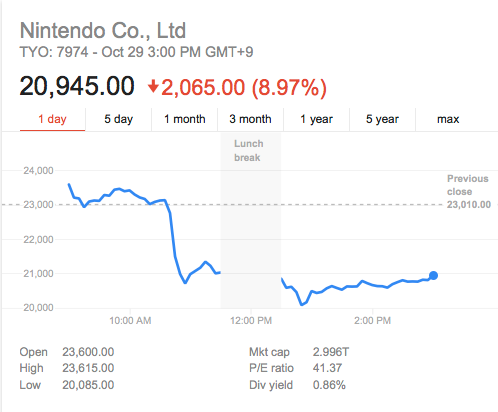 So nobody much likes the news, it seems. Miitomo launches in March; the company also said it has four more smartphone apps following on its heels, to be released by March 2017, but until Nintendo comes up with the goods, I'm guessing nobody is going to budge on their opinion much.

Still, I thought it worth considering what Miitomo is and and why it exists, as I see it -- if not to persuade anybody, at least to get it out there. Because I don't think it's a bad idea. I think it's a pretty good one.

You should really take a look at this slide presentation if you want to get a grip on what the app (yes, app, not game) aims to do. But here's the quick version: You make a Mii avatar; your real-life friends ask you questions; you answer them; it shares that info with your friends, and hopefully starts some conversations, as you learn more about each other.

It's more social and less game than anybody expected -- that's for sure. 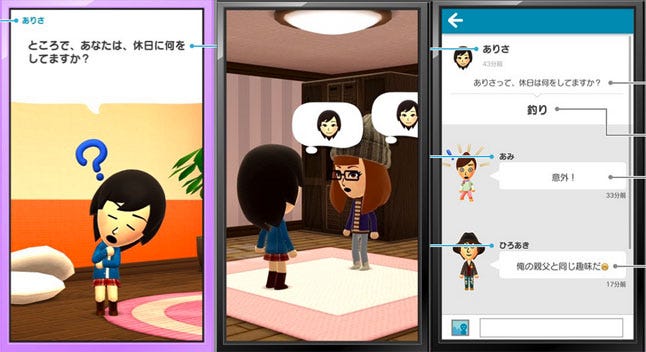 How Miitomo works: A friend asks a question, which you answer; she shares the information with another friend, and then, your friends can ask you more about your answer, too.

It's not all that surprising if you think about the mainstream internet population, though: Chat apps like Japan's own Line dominate in Asia, and, as anybody with a Facebook account knows, real-identity services are popular amongst mainstream audiences. (Here are some crazy stats on Line, by the way.)

The Mii, too, is popular with the average person. Anybody who remembers showing the original Wii to a non-gaming parent, friend, or significant other knows that. Popular, too, is Tomodachi Life.

While it may be best remembered in the West for controversy, it's a multiple-million seller, and particularly popular in Japan. Leveraging its basic idea -- interacting with your friends' Miis -- makes sense, as Nintendo approaches a mainstream audience. But Tomodachi Life, while shallow, is still very much a game; Miitomo does not appear to be. 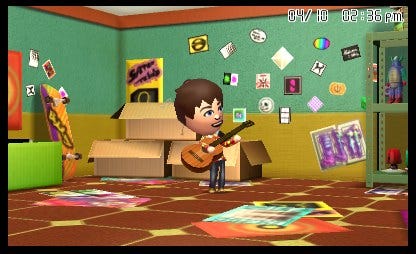 I think Miitomo is something of a Trojan Horse for Nintendo's new "Nintendo Account" service, which will span smartphones, PCs, consoles, and handhelds, with a single login, trading data between them. Getting people excited about making Miis hooks them into that ecosystem -- whether they love Nintendo or not.

One thing I think Westerners will likely have trouble understanding about the appeal of Miitomo directly relates to its origins in Japan. In the U.S., if we feel like we don't understand even our casual friends, and what they think, we consider that unusual; but in Japan, people are expected to project an outer image and guard their inner thoughts in all but the most intimate relationships.

Miitomo is a fun way to break down those walls a little bit. Tomodachi Life's premise is "Miis gone wild" -- your friends and family acting bizarre. This time, it's the truth, as supplied by the user, and not a goofy scenario devised by Nintendo's game designers. 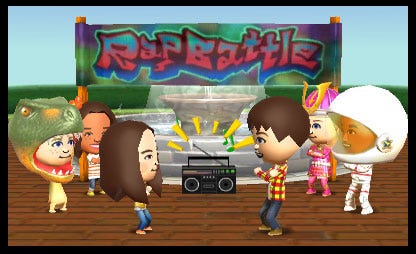 That ties directly into, I think, the crucial difference between a "video game" context and a "social" context, as defined by the social networking services we use on our phones -- like Facebook or Twitter. Nintendo is trying to leverage its ideas and expertise in line with mobile users, rather than impose its own ideas onto them. And that strikes me as rather interesting, actually.

What also interests me is whether or not this is the influence of Nintendo's partner, DeNA. That's, so far, unknowable. We do know that Nintendo is in charge of what gets made, but it chose a partner rather than going it alone for a reason. Late president Satoru Iwata's comments on partnerships are instructive, here:

"Nintendo is a company that, when considering possible alliances, believes that it must carefully review such factors as whether or not each company's strengths and weaknesses will smoothly complement each other and if the corporate cultures of both companies will work in harmony, rather than focusing on the potential short-term advantages," he said.

It'll be very interesting to see what influence DeNA has on Nintendo, and Nintendo has on DeNA, but it's far too early to tell.

Nintendo already has silent social networking experience, too, which it must have learned from. I say "silent" because outside of @badmiiverseposts, you wouldn't know much about Miiverse unless you're an active user of Nintendo's platforms. But Miiverse is a vibrant, if cloistered, social network that Nintendo's been operating for a few years now, and the company has had to have learned more than a few lessons from that experience.

Nintendo is not stupid. The popular perception, at least among the Western Twitterati, is that the company is completely out of step with current times. The massive misstep of the Wii U seems ample evidence of that. But when you begin with that as your premise, it's hard to judge the company's new ideas any differently.

I think Miitomo makes sense. I think it will likely gain the company a bunch of mobile users -- at least in Japan. My questions revolve around its viability for Western audiences, and also its financial viability. But when it comes to the latter question, I don't think Nintendo really cares; I think the Trojan Horse strategy for getting users hooked into its service ecosystem is the main play here.

After all, the company's president, Tatsumi Kimishima, said as much. He described Miitomo as "a free-to-start type communication application for smart devices, namely, our smart device application, which can be started for free and will push forward the My Nintendo membership service."

Take a look at this slide, specifically the 4th bullet point: 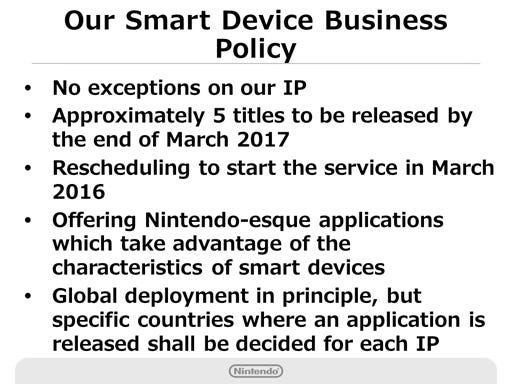 A goal of Nintendo's smartphone business is "Offering Nintendo-esque applications which take advantage of the characteristics of smart devices."

But yes, I must admit: Miitomo is far from an exciting announcement. It falters, as a bold statement of purpose. Miitomo obviously doesn't set the tone for how Nintendo is going to tackle bringing its beloved IP into the mobile age, and the company has said time and again -- including immediately before announcing Miitomo -- that this is exactly what it intends to do.

Nintendo's approach this time around is understated -- as is characteristic of the company. Right now, people crave boldness from Nintendo, though. But Miitomo does say something important about how the company looks at mobile audiences: It sees them as they are, and not necessarily as the company, or its fans, want them to be. And as Monument Valley lead designer Ken Wong pointed out today, that's vitally important if you want to succeed on mobile.