After months of drip feeding information, Microsoft has finally shared the complete list of tech specs for the Xbox Series X.

In a post on the Xbox Wire blog, the company revealed the next-gen console will be powered by a custom eight-core 3.8GHz AMD Zen 2 CPU, and a custom AMD RNDA 2 GPU that offers 12 teraflops of performance.

It'll also pack 16GB of GDDR6 RAM, a 1TB custom NVME SSD that should significantly reduce load times, and will notably allow users to add more storage using new 'Storage Expansion Cards' that can be inserted directly into the back of the unit.

Elsewhere, a split motherboard will work to keep the Series X cool to boost performance, and will be backed up by a vapor chamber, three air-flow channels, and a heat-sink chassis that has been integrated directly into console's pillar-like body.

As we already knew, all of that new hardware will let developers harness Microsoft's patented form of Variable Rate Shading and hardware-accelerated DirectX Raytracing, the latter of which is earmarked as "one of the biggest" advantages of the Series X. It'll also allow games to run in 4K at 60 fps "with no compromises for developers," and includes support for up to 120 fps.

Explaining how it intends to bridge the gap between the Xbox Series X hardware and software, Microsoft said its new 'Xbox Velocity Architecture" will integrate the two and optimize the streaming of in-game assets.

"Xbox Velocity Architecture will unlock new capabilities that have never been seen before in console development, allowing 100 GB of game assets to be instantly accessible by the developer," reads the blog post.

"The Xbox Velocity Architecture is about so much more than fast last times. It’s one of the most innovative parts of our new console. It’s about revolutionizing how games can create vastly bigger, more compelling worlds."

You can find the full list of tech specs below, or head on over to the Xbox Wire blog for a more detailed rundown of the console's capabilities. 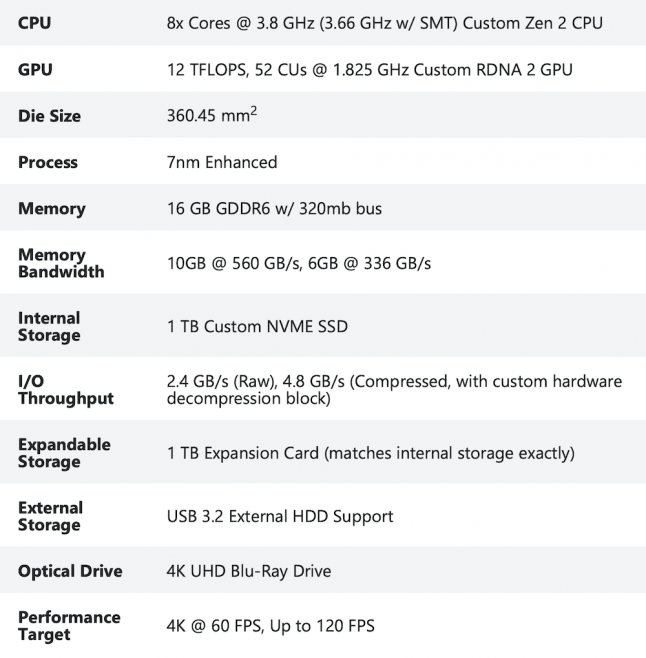