Matt Raithel, Graphite Lab: Developing a Brand You Can Build On

We were fortunate enough to be able to sit down with Matt Raithel and discuss howÂ Graphite LabÂ recovered from their failed Kickstarter, developed Hive Jump for Switch and Xbox One, and landed on the front page of the Nintendo eShop.
Jessica Paek
Blogger
January 24, 2019

We recently came across an AMA thread on Reddit from Matt Raithel regarding Hive Jump’s recent release on Nintendo Switch and Xbox One. The tagline read, “from failed Kickstarter to the front page of the eShop.”

We were fortunate enough to be able to sit down with Matt Raithel and discuss how Graphite Lab recovered from their failed Kickstarter, developed Hive Jump for Switch and Xbox One, and landed on the front page of the Nintendo eShop.

I got my start right out of school doing licensed titles with a startup called Black Lantern Studios.

Companies like Nickelodeon and Hasbro would hire us to make games like Dora the Explorer or Candyland for GameBoy Advance.

When Black Lantern Studios started to grow and expand, we opened our  first expansion office in Austin, Texas, and it did well enough that we were able to expand again.

Being from St. Louis, I saw it as a new market where we might be able to do more licensed titles for some of the big companies around there.

We started a St. Louis office in 2009, which is where and when we created Graphite Lab.

A couple years ago, most of the founders of the company were ready to move on, so I bought Graphite Lab and spun it off as its own company, which is around the time we first started releasing Hive Jump onto different platforms.

While we’re working on Hive Jump, we also have 14 projects in various stages of development.

When I talk to other aspiring developers who are thinking about going out on their own, I tell them that we’re diversified in a ton of different ways.

You can go out, build your dream project, and bet everything on that one project.

One example of how being diversified has given us extra cushion is with Hive Jump happened during our Wii U development.

We talked about coming to the Wii U, and we planned a great path going to that console.

Then, during the course of our development, Nintendo hinted at the Switch, announced it, and released the new console before we could even get the game done for Wii U.

Our approach is to keep those contract opportunities open and keep making games for other people as well, and that’s allowed us a lot of versatility in terms of going after opportunities, like Hive Jump on Switch.

We juggle a lot, and there have been challenges along the way, but my interest has always been to learn from these incredible licensed brands.

If we make a game with Cartoon Network, we try to observe what makes these brands so awesome––whether it’s character design, marketing, or narrative––and try to pump that into our brands like Hive Jump.

We try to learn from our partners and incorporate that into our own ideas.

We don’t have a huge team by any means, we’ve got 10 developers in house, we contract, and bring in partners.

With Hive Jump, we’ve been working with Wooden Anchor Games, another studio here in St. Louis, to help us prepare for the Switch and Xbox One release.

Wooden Anchor helped by getting more engineering staff on Hive Jump and helped with some loose testing.

Throughout this whole journey, we learned how to use our network and our resources.

We did our first Kickstarter in February of 2014 thinking that we had it all figured out.

We were experienced license developers and we went into Kickstarter thinking that it would take some effort, but I didn’t think it would go as badly as it did the first time.

After 2 weeks, we pulled the plug.

Over the course of the next three or four months, we ended up spending about another 500 hours working on the project.

The next time around, we finally came back and were successful.

In order for us to be successful, we had to have something going on every single day.

Our Kickstarter did not just take off, it took a lot of effort.

I don’t know that it would fix everything, but I think if people a treated crowdfunding campaign the same way as they treat a game launch, I think we might have better results.

We decided that, for at least those solid 30 days that the Kickstarter is going on, we had to be talking about the game nonstop.

With this recent release, we’re treating it like Kickstarter: morning, noon, and night, we’re tweeting, we’re doing giveaways, we’re doing interviews. For a full 30 days, we’re giving it everything we’ve got.

We’re always marketing, and we have to be very extroverted in that sense, but we think it’s served us well.

We started with Kickstarter in 2014, then we released on Steam in 2017, then later on that year, we ported Hive Jump to Wii U because it was a Kickstarter obligation.

Now here we are, two calendar years later, the game is out on Switch and Xbox One.

Hive Jump has been in some sort of development since 2014, and now things are in a much more stable place than they were when we first started.

It’s taken a long time for us to get here, but with the ports to Switch and Xbox, the effort that has gone into getting the game on those platforms will recuperate itself within a couple of weeks.

Compare that to the years it took us to get that first investment back.

Now that the game is where it’s at, Hive Jump doesn’t have to sell 100,000 units for us to be successful.

Even if it sells 20,000 units, we’re going to be having a great time, just because we’ve done all that up-front investment.

Whether we’re being foolish and stubborn or being courageous and wise, we just keep going and we don’t give up.

“At first it was kind of daunting, wondering if we could really do both releases on the same day.”

We had done Xbox 360 development and Nintendo Wii development around 2010 to 2011, and getting Hive Jump on the Wii U was very time consuming, but with Xbox it was very easy.

When we decided to release on Switch and Xbox One, we thought porting to Switch would be very painful, but that Xbox would be just fine.

This last release turned out to be the opposite, where it took a lot of extra effort to get the game set up on Xbox One than we had originally expected, but for Switch, coming from Wii U was actually pretty comfortable.

Nintendo’s developer tools and their backend dashboards are way more robust than they used to be, and coming to the Switch was a lot less painful than I thought it would be.

At first it was kind of daunting, wondering if we could really do both releases on the same day.

We started on Xbox first and got it rolling, got it off to certification, then we moved to the Switch.

We set goals for ourselves and we hit both goals in terms of having the both platforms done in time so that we could switch to marketing.

We learned it’s immensely helpful to have a solid four weeks just after the game is approved through certification, then to announce a release date, so then we could spend three to four weeks just preparing marketing materials, support, trailers, and everything else we needed for launch.

What’s next for Hive Jump and Graphite Lab?

The reception to Hive Jump on these new platforms has been positive enough to where we can keep working with it.There are some cases where the response isn’t what you want, so you move on.

So far, Hive Jump has been great on these two new platforms, so whether it’s small improvements like simple patching or bug fixing, or things like DLC or skins, I think there’s some future possibility.

We haven’t announced anything or made anything official, but I think so far so good with Hive Jump.

We have some other ideas kicking around in the back of our minds, like maybe a partnership with Wooden Anchor Games.

My vision for what we can do next for Hive Jump is that we can work with Wooden Anchor on additional content for Hive Jump, while our core team works on new ideas and work on these things simultaneously. 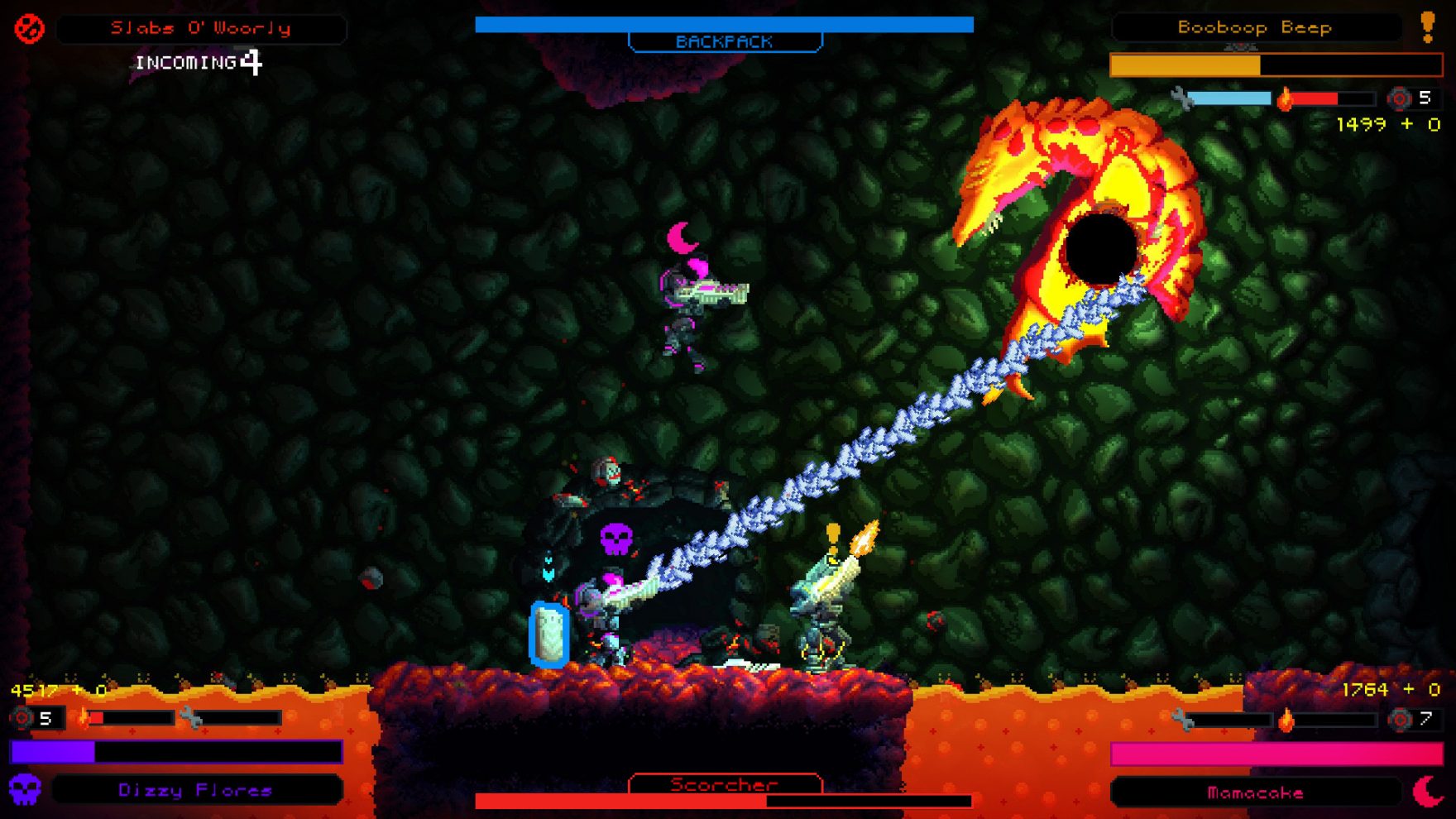 Verified content creators and press can request a key for Hive Jump or an interview with Graphite Lab through their game page.