I was trying to simplify and improve my gamification user types. Version 2 is just that and a little more. After more research and the results of mine and others surveys on the matter, I have realised a few things.
Andrzej Marczewski
Blogger
November 29, 2013

I was trying to simplify and improve my gamification user types. Version 2 is just that and a little more. After more research and the results of mine and others surveys on the matter, I have realised a few things.

The four basic types; Achiever, Socialiser, Philanthropist and Free Spirit are all fine. They work and can be left exactly as they are.  I am also happy that the extrinsic types (Consumer, Networker, Self Seeker and Exploiter) are ok, however – they have caused a lot of confusion with people. I made everything a little too black and white – it was as if people saw my intrinsic types and extrinsic types as good and evil!

As such, I offer this new version. It is not a replacement, more an addition. If you are using the current four or even eight types – keep using them, they work just fine! However, this is where my thinking and research has led me, so I wanted to present it here properly.

The image below shows the basics. 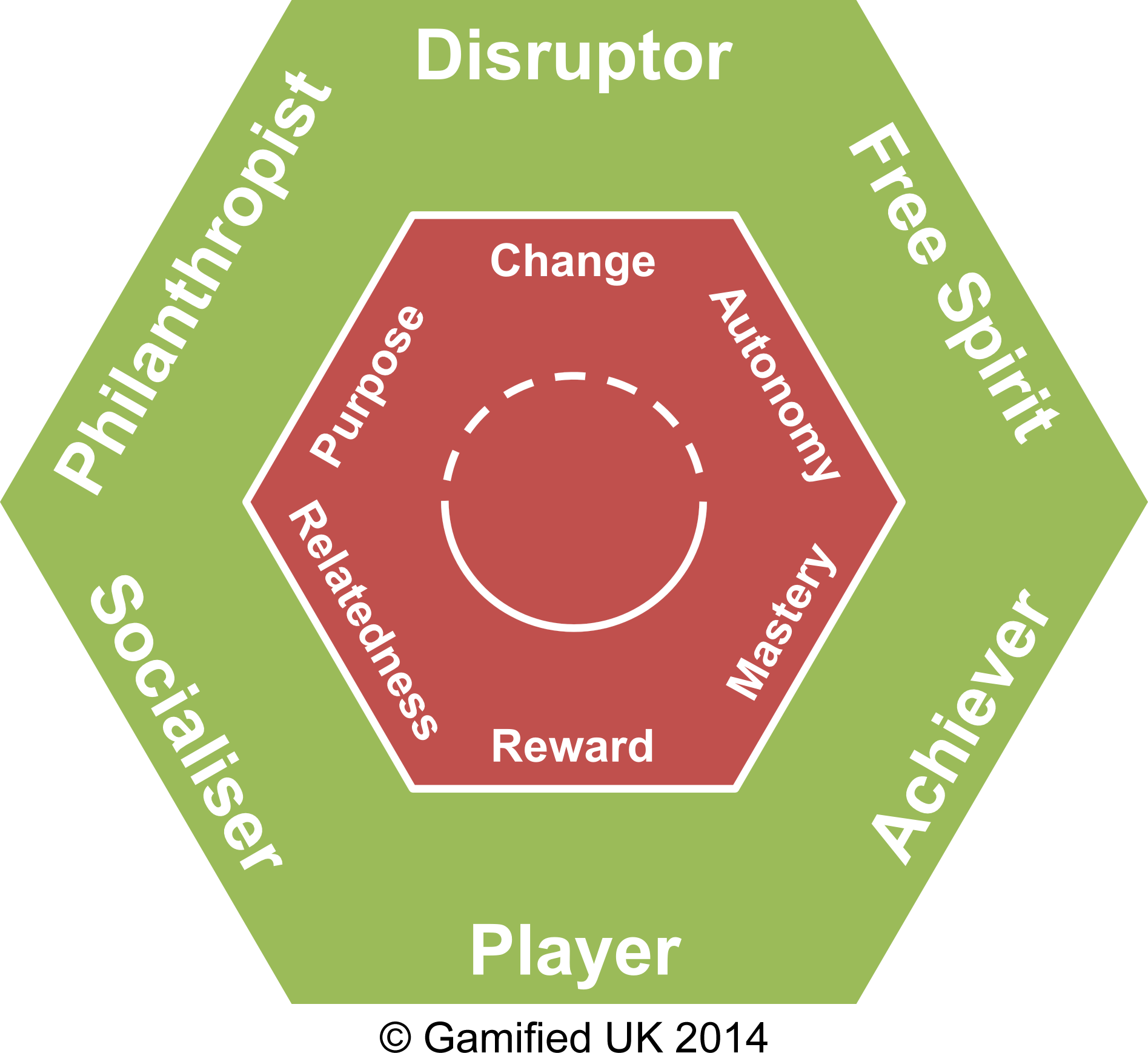 As you can see, there are now six names on the board. Philanthropist, Achiever, Socialiser and Free Spirit are still there and still represent the four intrinsic motivations of RAMP, however we now have Disruptor and Player.  Neither of these is new, Player was first introduced in my original work on user types as a name for the extrinsically motivated users. Disruptor was introduced recently as my “negative” user type.

Players are happy to "play" your game, where points and rewards are up for grabs. Disruptors want nothing to do with it and the others need a bit more to keep them interested.

It took me a while to realise this, but black and white is actually not all that much use when talking about how people behave. Grey is a much more usable area for this. So, I have created a little grey with the new user types.  Whilst Players and Disrupters can be seen as distinct user types in their own right, they can also be viewed as modifiers for the other four types.

If you have seen the original user type descriptions, that is how I created the extrinsic groups.

So the Player characteristics of being interested in the rewards a system can give them can be seen as modifying the motivations of the intrinsic types.

The same can be said of the Disruptor. Their interest is in disrupting the gamified system. The reason for this can be varied. It may be considered purpose.  They feel that disrupting the system has a greater meaning, be it educating the creators of flaws or proving that the system is somehow wrong. It could be autonomy. In the intrinsic types, autonomy is seen as a positive motivation, exploration and creativity.  However, this can just as easily be seen as wanting to break free from the confines of the system – how can you have true autonomy when there are rules in place that you don’t like. Mastery can be achieved as they learn how to disrupt the system and Relatedness can be seen in the status that such acts can give them.

All of these things relate to the positive motivations I talk about, but they would be considered by most as the polar opposite. Rather than helping, destroying. However, at this point it is worth considering the more modern meaning of Disruptive. These days disruptive refers to improving the system by breaking down the norms and showing new and improved ways.

As I say, this creates a lot of grey areas. Disruptors should for the most part be discouraged from being in a stable system. If they are hell bent on breaking the rules for no reason other than because they can, they need to be removed.  However, they may well be the key to unlocking better levels of engagement by showing you what is wrong with a system and how to improve it!

There you have it. My current thoughts on the gamification user types. It may seem like I am making the waters muddy, but if you choose to use this version of the user types, you will see that it gives you much more flexibility and a better understanding of the grey areas of user motivations!