Magic Arena is not Magic the Gathering

Magic Arena the last product of the Magic the Gathering franchise, it isn't really MTG, it is a new game, with a different gameplay and a different audience.
Game Developer
Staff
June 19, 2019 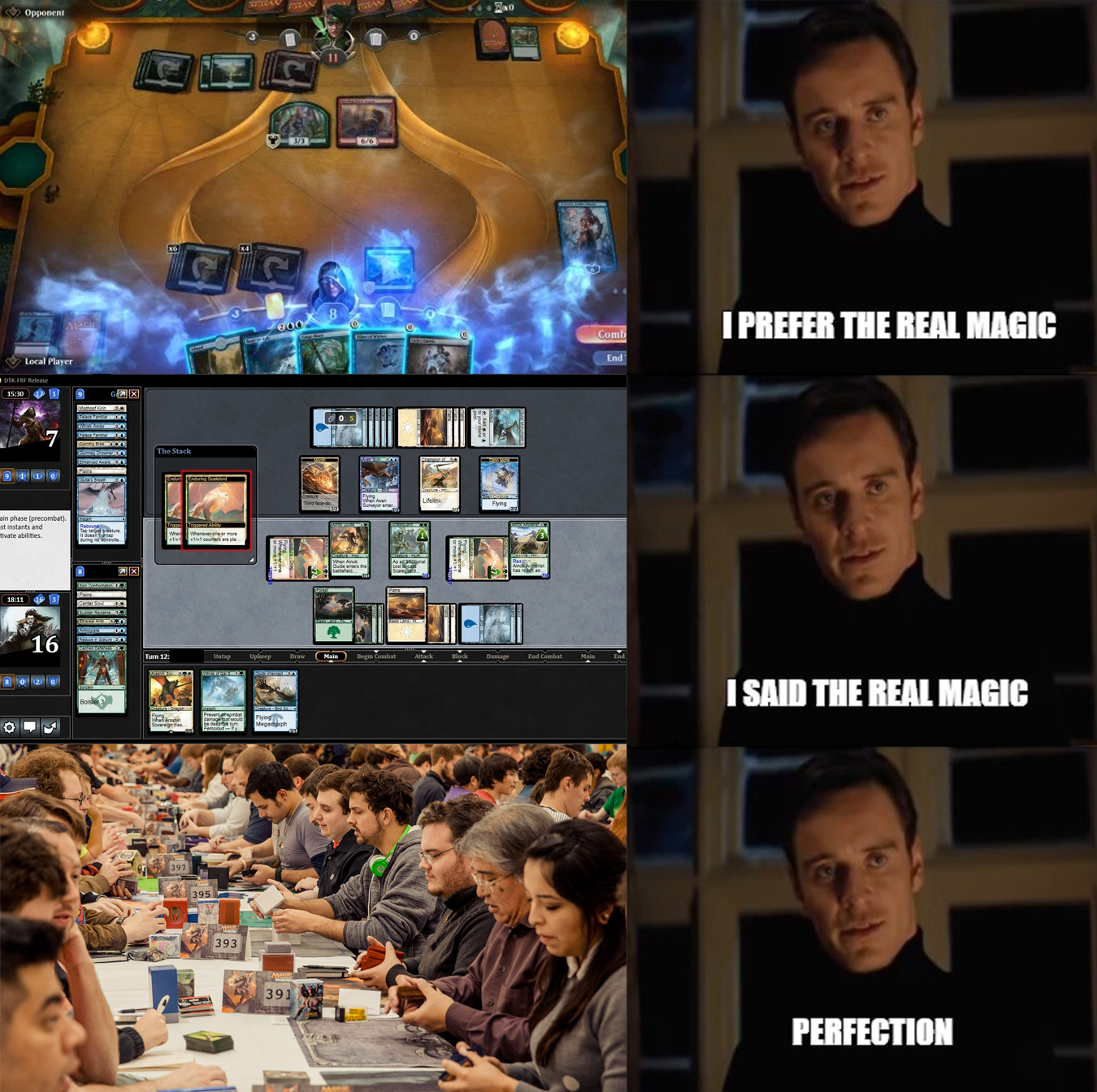 *A certain sub-group of MTG players

I always had a love/hate relationship with Magic the Gathering: I love the depth of the game, the lore, the art style and the competitive side, and I hate mana screw, color screw of a mana flood. I started to play in 2003 with the “original” Mirrodin, and I never really stopped, until I tried Magic Arena and from that moment I have abandoned the physical version of the game, to fully switch to the digital version. Before MTGA I tried other digital version of the game: MTGO and even the mobile version, but none of those had the even the slightest chance to beat physical MTG.

I started to investigate how MTGA has beaten physical MTG (at least for me), as game designer I knew that the answer was deeper than UI/UX, the convenience to play anytime/everywhere you want, and avoiding to have million of cards in your house, since all this pros have cons like losing the physical feel of the game, renounce to the social aspect of the game, and losing the market value of the cards.
After a long time a finally realized, what I was missing: MTGA and MTG are two incredibly different games.

MTG has lots of different formats but for the sake of simplification let’s divide them in two:

Each of these two can be played in a competitive environment or in a casual environment, for length purposes, we will analyze only Constructed Magic. Constructed be divided into three main phases (once again this is a huge simplification):

The first difference between MGT and MGTA is the fact that MGT is a trading card game, while MTGA is a card game. In Arena (at least at the moment) is not possible to trade/exchange/buy cards from other users or from a wizard of the cost seller; the only way to acquire new cards is to buy booster packs.

This reason behind this decision is monetization as only selling booster pack leads to a higher monetization respect a “free” market. However this decision has a huge impact on the game, since MTG expansions have usually more cards respect other card game (like Hearthstone and Yu-Gi-Oh) and a deck can contains more copies of the same card (up to four), MGTA is reducing the efficiency of netdecking.

Netdecking is a very common practice in almost (one exception is keyforge) competitive card game, since not everyone has the time/ability/effort necessary to create a deck from scratch, most players copy their deck from youtubers/forum/famous players. Netdecked decks are usually very good and high demanding on resources; they require expensive and rare cards in multiple copies, for competitive MGT players this is not a huge issue, if you have money/cards you will always find someone that will sell/trade you the cards that you need. However in MGTA perfect netdecking is a bit more complex, if you don’t have the cards that you need (and you don’t have enough wildcards) there isn’t any reliable source of cards (as booster packs are random) of course with enough money you will eventually find the card (or generate a wild card) but it’s a slightly more complex/longer process respect MTG. For that reason “imperfect” netdecking is way more common in MTGA respect MTG (even in important tournaments), this small difference has a huge impact on the game:

Even slightly reduce the impact of the metagame in a game like MTG has a huge impact on how the game is played (both by casual and hardcore) and how the game is perceived, as the game balance shift from strategy to tactic.

One of the most common rookie mistake in competitive Magic is to believe that your deck is the most important part of the game and your strategy, while more seasoned players know that your sideboard and your knowledge of the current and local metagame, is way more important.

Knowing the metagame allow the players to make better tactical decision (the gameplay), based on your strategy (your sideboard + your deck), if I know the opponent’s deck and I can change my tactic based on it, to increase my chance of victory. After the first match both players can use their sideboard to change their deck to better react to the opponent’s deck, and potentially (depends who won) in the third match use the sideboard again to react to your opponent’s sideboard.

This type of reacting-mindgame is so important that is highly competitive environment is possible to see a first match end by concede after two turns as one of the players has recognized the opponent’s deck, knowing that his chances of winning the first match are very low, the player concede in order to access his sideboard while hiding his deck from his opponent (if the player1 didn’t show any relevant cards) gaining advantage in the second match (I know how to sidebord, you don’t).

The original purpose of the sideboad was to help players to react to super-specific strategies, like grave based deck (eg dredge), that’s because usually cards that are very good against a specific strategy don’t do anything else (eg anti-dredge card). Without a sideboard players will have to choose if add cards that help them to win or add cards that prevent them from losing (in specific situations).

In MGTA one of the main competitive mode is BO1 (Best Of One), in which players compete in a single match without a sideboard. This decision was made in order to speed-up the game and reduce the overall length of a match in order to appeal to a casual audience and further enhance the concept of play everywhere/anytime. Nevertheless this decision lead to another effect, the sideboard has no meaning (except for specific cards like Karn). At first glance this might not seem a great difference, but competitive MGT without a sideboard is not MTG, is a variation, it’s a new game. Without a sideboard the core of your strategy is your deck, which now has to contain both cards that help you to win and cards prevent your opponent’s deck from winning. 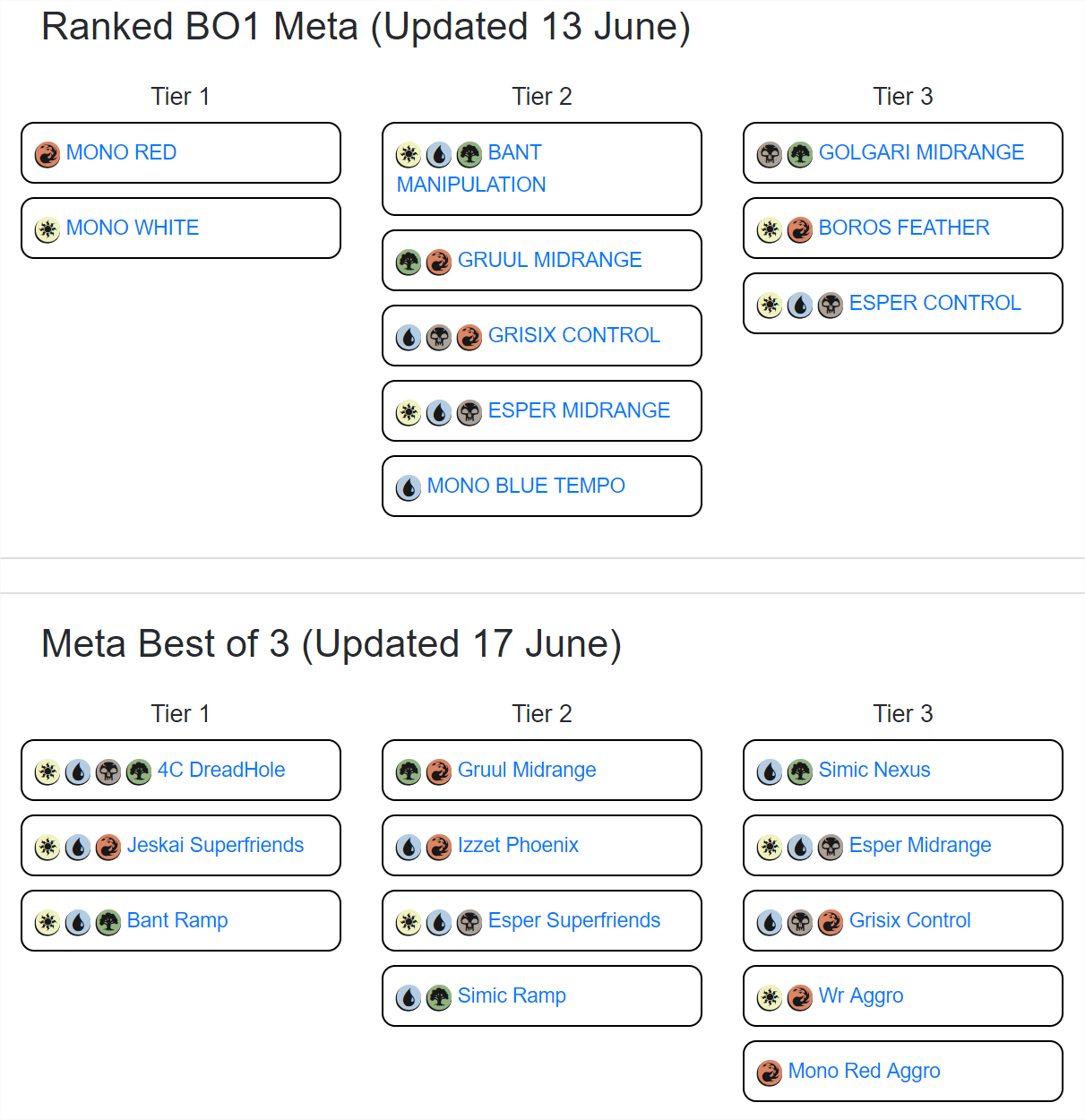 This is clearly visible in difference in Tiers deck between BO1 and BO3, in BO1 Mono-red is Tier 1, while in BO3 is Tier 3. This huge difference is caused by the absence of the sideboard, a burn deck or a mono-red aggro deck can efficiently countered by sideboard cards like: ritual of soot, moment of craving and cry of the carnarium (to cite few), any midrange or control deck will have one or more of these cards in its sideboard, but that it’s not possible in BO1 as introducing any of these cards make the deck strategy less efficient and the deck becomes more fragile (a deck is considered solid when most of the cards are present if 4x copies, when a deck has multiple 2x cards is usually referred as fragile/situational), leading the player with the decision to have a highly solid and efficient deck, that might be very vulnerable to specific cards/decks or reduce the efficiency of their strategy to cover multiple angles.

BO1 main decks and BO3 main decks, are differentiated with a value that varies (based on the deck) between 10 and 15 cards, with is a difference between the 16.6% and 25%, this value combined reduce impact of the metagame and potentially the increased fragility/situationality of the deck, leads to a way more varied/evolving metagame and a match full of surprise (as the unexpected card at the right moment can change everything).

Competitive MTG is a strategic game with tactical decisions, the game requires: knowledge of the metagame for both the sideboard and the deck, the ability to read your opponent, and the skill to correct side-in/out is fundamental, and to certain decks even more important than playing (for non-interactive deck).

MTGA is a tactical game with strategic decisions; knowledge of the metagame (as we saw) is less relevant, reading your opponent is incredibly difficult and barely useless (for example as you cannot know if is slow playing or AFK), the sideboard is not present, the clock can forces you to take rushed decisions, the fragility/variety of your and your opponent’s deck forces a higher level of attention. All these differences leads to a more tactical game, where your ability to create short-term tactic and the player ability to respond to short-time treath are more variable than a long-term strategic mind.

A strategic game with tactical decision, and a tactical game with strategic decision, might seems very similar and under certain aspects they are but they also are highly different, they appeal to different audience, they require different skills and they lead to different dynamics and metagame.

A game is always more than the sum of its components, nonetheless when we have to analyze a game we need to analyze its components and atomic elements, as we confronted the components of Arena and Magic, we arrive to the conclusion that MTGA is not MGT is a variation/iteration as sequels are variations/iterations of the first/previous game and as any iteration this “new game” can be appreciated or criticized.

The real interesting question that I want to ask you is:


“Is this the result of a careful production/design plan in order to attract a new audience ? Or it is the lucky result of choosing the dominant monetization and mobile card game design strategy?”