A recent report from the first half of 2014 showed that Kickstarter funding was in decline. Upon closer analysis, the numbers for smaller projects are relatively steady. Read on to learn why the decline may not be so bad.
Priyesh Patel
Blogger
October 07, 2014

A few weeks ago, a report from ICO Partners looked at the numbers from Kickstarter for the first half of 2014. And the results weren't great.

Even with a quick projection through the end of this year (doubling the numbers from January to June), the total number of projects is projected to fall by 20% compared to last year. And the funding numbers seem worse. Much worse. 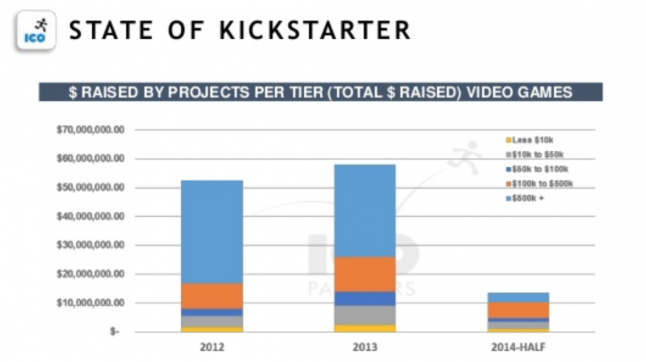 Is Kickstarter funding getting slashed in half? Hang on.

One limitation of ICO's analysis is that it lumps all projects together. On closer analysis, more than half of the total funds raised in 2013 came from large projects (those that raised more than $500,000 each). In 2014, large projects raised only a quarter of the year's total (so far).

When we look at projects earning less than $500,000, the numbers are thankfully more steady.

Even without a comprehensive study of the Kickstarter numbers, analyzing the report from ICO Partners shows the need for a follow up.

Some people are a little confused because the study only refers to the first half of 2014. So it helps to visualize a quick doubling. It also helps to separate projects above and below $500,000.

Why 20% May Be Closer to Reality

Interesting enough, 20% corresponds to the decline in the number of projects funded.

This also corresponds to the decline in the success rate. According to ICO, the number of successful projects has declined from 24% to 20% in the past year. That 4% decline is roughly 20% fewer successes than than last year.

These numbers paint a very coherent picture. It makes a ton of sense that 20% more failures would lead to 20% fewer projects, and 20% less funding.

Are there fewer dollars to go around? Have audiences lost interest? Or are they more willing to say no? Whatever it is, the opportunities for smaller projects are still out there. But they require more planning and strategy to capitalize.

But What Happened to Large Projects?

There are only so many reboots and spiritual successors. A lot of recognizable studios are already busy, working hard to deliver on their Kickstarter promises from 2 years ago. How many big studio reunions are we still waiting to see in 2014?

That being said, it would help to know who is asking for funding. What if some of the big studios have given up and decided to scrounge for dollars in the below $500,000 categories? Then the seeming steadiness of the smaller fundraising is actually the result of the large projects being decimated.

Still, there aren't a lot of examples of huge franchises who are going fishing in the shallow end. So before people hit the panic button, it's important to have the right data.

What Do We Do?

Large projects may have slowed down, but smaller projects are on track to raise 80% of what they did last year. Considering the worries about kickstarter fatigue, not to mention a full year of competition from next-gen consoles, this isn't the collapse they keep warning us about.

If you believe that large projects attract attention to smaller ones, then this might actually be amazing news for small studios. Without any high profile projects, there is still a thriving community around the most indy of the indy games.

It's worth digging into the numbers more. We'll want to wait until 2014 wraps up. We'll also want to pay attention to any big studios that wade back into the crowdfunding waters, and see if they still generate the same enthusiasm. Not only for themselves, but also for the surrounding community.

And it's still important to remember the bigger crowdfunding picture. How does the rise of Steam Early Access affect Kickstarter's decline?

The last thing is what ICO Partners themselves stated, that an organized crowdfunding campaign is only becoming more important. Whether we're in a slump or only a slight downtick, we still know that the Kickstarter success rate has fallen for smaller projects. Studios have no choice but to rise to that challenge.

Success will always depend on the right project, the right pitch, and the right target. Plus, a hell of a lot of work.