Pokémon GO provides new users with an unconventional introduction to the game. Is this the key to its success or has it thrived despite it?
Steffie Garcia
Blogger
July 25, 2016

Pokémon GO launched on July 6th and has been an unprecedented success with over 21m DAU in the US. The game hit Number 1 in the usually very static top grossing charts, with an estimated $1.6m daily revenue.

Users on Twitter have described the game as confusing:

How in the world do you use pokemon go? So confused...

*downloads the Pokemon go app*
*gets on, makes a profile*
*confused af*
*deletes the app*

The tutorial is very light, compared to other games in the Top Grossing charts and the game doesn’t appear to have had a soft launch to test their FTUE. This is interesting because usually when developing a free-to-play game, testing and iterating on the FTUE in soft launch has been thought of as vital to the games success.

The tutorial starts by setting the world and explaining why the players should care about their goal.  Compared to the rest of the tutorial, a disproportionate amount of text is used here. The game is providing motivation rather than instruction which is an efficient use of the player’s limited attention span. 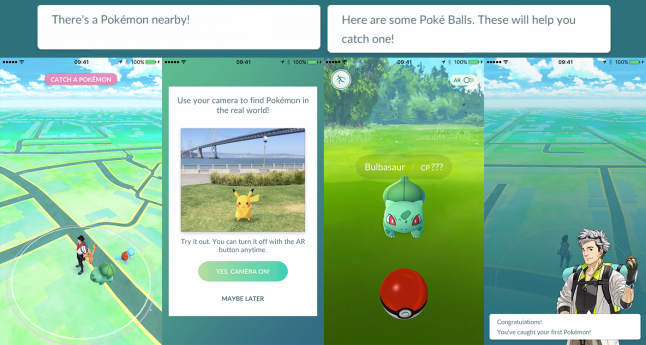 Then comes the tutorial for the core gameplay, catching Pokémon. This only consists of 2 lines of text and a static message at the top of the screen saying “Catch a Pokémon”. The player is left alone with three Pokémon shown on the map. There are no pointing fingers telling the user where to press. The user must find out what to do on their own, by experimentation.

After catching a Pokémon the user is prompted to create a nickname. This is a great time to ask for this because they have just had a positive experience and will feel willing to spend the time finding a unique username. Once you have entered your nickname, the tutorial moves on to the next topic immediately with no explanation for why you have entered the nickname. By hinting that there are other trainers in the game, it adds to the idea that there is much to be discovered. 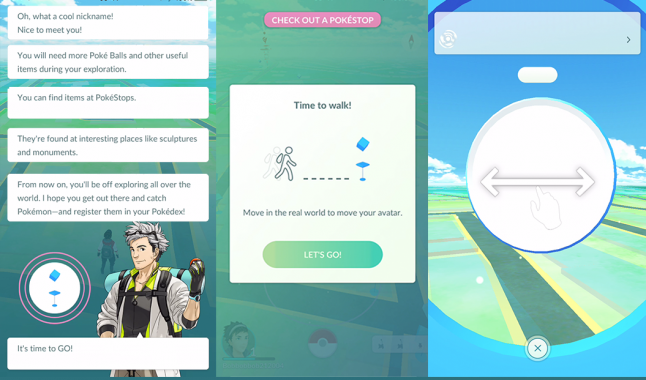 The metagame for Pokémon GO is quite complex, with many different consumable. Pokeballs are the only consumable mentioned in the tutorial. The last part of the tutorial revolves around the Pokestops which is how the core game’s consumables are harvested. This is well covered by the tutorial, using a visual prompt explaining how to interact with the Pokestops.

Leaving key parts of the game as unexplained makes them all the more desirable. This can be seen most clearly with the Gyms as there is no tutorial on how they work and they are never even pointed out to the user. This is odd because they are a complex area to the game with many mysterious choices. Players take an active role in finding out how they work - either by trial and error or looking online. Although the initial confusion will have a negative effect on the player, the satisfaction of having an understanding of one of the more mysterious parts of the game and being able to pass that information in person to other players will give that player a feeling of mastery and keep them playing the game.

From searching online to find out how the more basic aspects of the game work, users come across other players sharing their different experiences on social media. By sharing different experiences players are uncovering hidden layers of content. Numerous articles have spawned telling users how to play the game and uncovering secrets such as how to get Pikachu as a starter pokémon. These untold features give Pokémon GO a lore - a mixture of facts and rumours. Tips, secrets and strategies are passed through word of mouth (and social media). The news coverage and businesses supporting the game teams adds to the metagame and brings it into the real world. Players will start to see the real and digital worlds collide, giving a sense of ‘presence’. These real world events feed into the lore and every mystery becomes a source for engagement - and user acquisition.

Having a lore surround a game has worked well for other games such as Minecraft, helping them to become phenomenons. Surprisingly, mobile games rarely attempt to build a lore around themselves. The experiences tend to be very controlled and predictable. It is more likely that hidden content is avoided because a studio wouldn’t want to spend resources making content that may not be used by all players or directly drive revenue. But if more new games did include hidden features, this could help to create a lore surrounding their product, making for a more immersive experience and ultimately increasing the game’s virility. 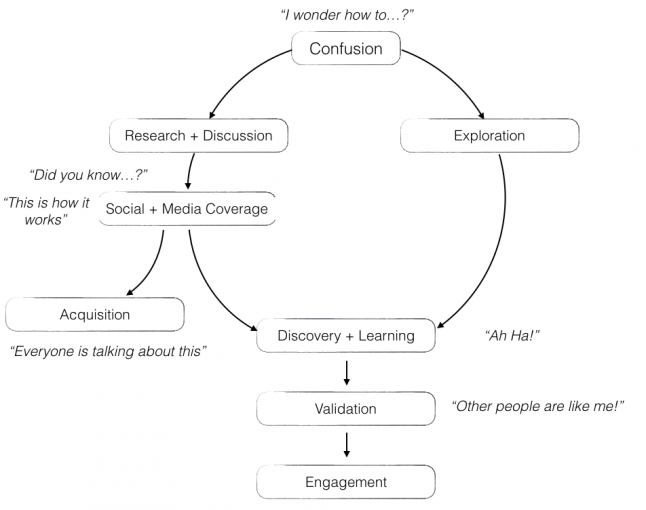 It’s hard to say if the user experience was light by design or not, but Niantic have created a user experience that feeds on human curiosity which has made the game go viral. Some elements of Pokémon GO’s UI and UX are clearly poorly thought out, and will be iterated on in future releases, but there is also much we can learn from it. Perhaps many games can get away with only providing players with the minimum that they need to know to play the core game. This leaves enough for there to be an air of mystery and then leave word of mouth and social media to fill in the knowledge gaps. Priority could be placed on piquing interest into making users want to continue through clear emotional goals, an narratives users can place themselves into. Tutorials are expensive and time consuming to create, and most users find going through overly controlling tutorials frustrating, so a light-touch tutorial can be a benefit to developers and users alike.