Indie devs at Tokyo Game Show discuss the pros and cons of the event, and compare it to other industry trade shows.
Game Developer
Staff
September 29, 2015

When I asked developers in the indie game area at Tokyo Game Show how they felt about its placement, I also asked them if they had been to other shows and if so, how they felt their exhibitor experiences at TGS measured up. Their responses covered a range of topics from number of attendees to how much business they could get done  to atmosphere and ease of setup.

Opinions of overseas developers exhibiting at the Tokyo Game Show

Marc Flury of Drool felt that TGS is one of the better shows he's been to. "The equipment rental was reasonably priced and easy to do, and the crowd has been amazing," he says. "Having an indie section actually helps a lot, because everyone who comes here is psyched about these games. You're not put next to Call of Duty or something."

Quadrant developer undef praised the sheer number of people developers can reach at an event the size of TGS. However, he prefers the atmosphere of smaller shows better. "Other festivals, like BitSummit, are just more fun and laid back and more cozy. I feel like you're also better taken care of there," he says.

Julia Keren-Detar of Untame thought the TGS indie game area was actually more crowded than that of another big show, Gamescom. "It's pretty impressive, considering that we're off in a different section of the conference," she says.

"I'm running my booth and I'm just a dude, so I can't really meet people in a special meeting area."

Developer Alex Rose's comparisons focused on the business aspects of TGS. "The passes are really good at TGS because you can just see who's press," he says. "Also, there's a lot of big press that doesn't come to some of the English shows I go to." He adds that TGS is great for finding localizers for all languages, not just Japanese.

That isn't to say that Rose thought TGS is without flaws. "TGS doesn't give you a press list," he says. "They have the business matching system, but I don't think it's really good for indies," he says. "I'm running my booth and I'm just a dude, so I can't really meet people in a special meeting area." In spite of that, however, he met some important people from companies like Sony and Microsoft last year, and feels like TGS was key to securing the future of his game, Super Rude Bear Resurrection, which is now being funded by Sony.

Although Rose thinks there are ways other shows are better, he finds that TGS is well-rounded. "Really, I divide shows into four categories," he says. "One, is it fun to be at for hanging around with people? Two, can you get good business stuff done there? Three, is there good press? And four, are there consumers there? TGS  kind of nails all of them." 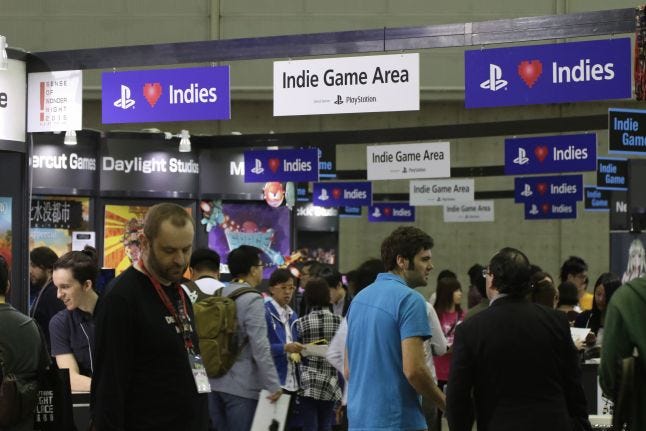 The perspective of Japanese indie developers at TGS

Yuichiro Kitao of Gemdrops said that overall TGS suits his purposes better than the other smaller more indie-focused events do. "At BitSummit and Tokyo Indie Fest, it's mostly game creators who come to the events," he says. "Seeing what users think of my games is my goal, and I think TGS is better for that."

Takumi Naramura of Nigoro pointed out that attendees at events like BitSummit and Tokyo Indie Fest are already familiar with indie games. "Naturally, there are a lot more people who don't know much about indie games at TGS," he says. "So it's an opportunity to gain new customers."

Masahiro Onoguchi of Quad Arrow seemed to want some happy medium between large and small trade shows. "I want BitSummit to retain that indie spirit, but be better run," he says, "On the other hand, I'd like TGS to become a place where more of that indie spirit can come out."

Developer Satto Nakajima of Picorinne Soft said that he and his partner don't speak any English, and although that had caused some problems it was still exciting to be at TGS. "The fact that people come from all over the world is part of the appeal of TGS," he says. "TGS makes it feel like our games could spread internationally." 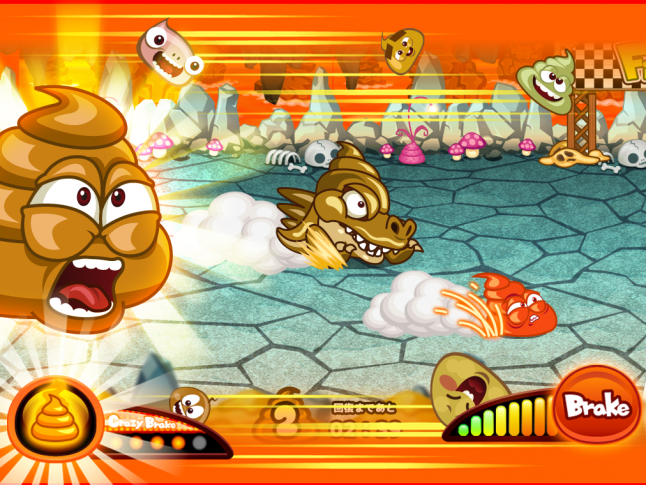 Only one of the Japanese developers I talked to, Akihiko Koseki of Dice Creative, had been to shows overseas. His game is a simple racing game for mobile devices called PooPride. The game is designed with a serious goal in mind: getting people more comfortable with poop because it can be very informative for health reasons. When I asked him how he would compare Tokyo Game Show to other shows he's been to, he responded, "My favorite trade show was Gamescom. German children love poop, so it left a good impression."