How we messed up and how we succeeded: Malta Global Game Jam

Lessons learned from organising the Malta Global Game Jam. An organiser's post-mortem describing the things we thought went well and things that went badly, so others can learn from our mistakes and take inspiration from our successes.
Jasper Schellekens
Blogger
February 14, 2018

Organising a Game Jam is no walk in the park. It is more like a mad dash in the woods, without a map, for 48 hours, while being chased by energy-drink fueled bears, cranky because they haven’t hibernated and they also need the wifi password.

What follows is our attempt as organisers to give you a hastily drawn map on the back of your hand, so maybe you can make it out of the woods with less claw marks on your back and bruises on your knees. If you’re thinking of participating in a Game Jam you should probably have a look at Dorian Bocur’s post-mortem of his Game Jam participation.

If you’re planning your Game Jam and the cranky wifi bears are so close that you don’t have time for our flowery narrative skip on down to the TL:DR section.

Before the Game Jam 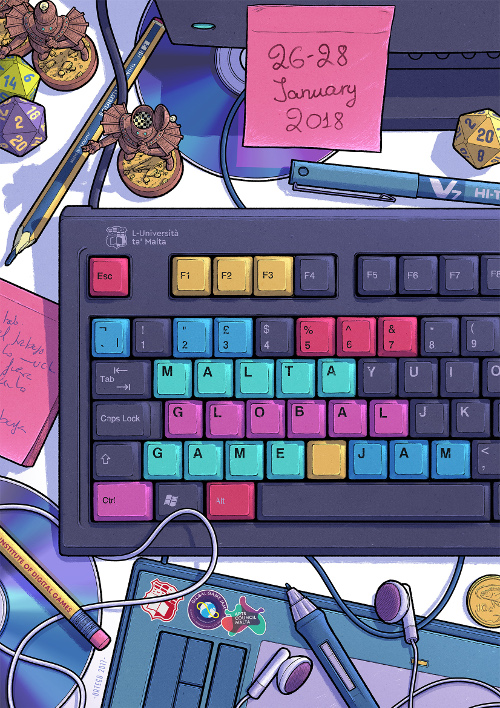 Our Game Jam preparation always started with the selection of the keynote speakers. Thanks to the support of the Malta Arts Council we had the luxury of being able to invite three keynote speakers, so our first challenge started with agreeing on three keynote speakers. But as they say: “More Speakers, More Problems”. Everyone had a different idea of what was important to bring to the table, but finally we agreed on a good balance. And having learned our lesson from last year we went quickly through our list to make sure our speakers wouldn’t be booked on the date.

Once that was completed, we encountered another problem: how were we going to allocate the very limited time for presentations before the announcement of the theme? We normally made do with only two speakers, so we had to cut the presentation times down significantly mostly at the expense of the Q&A session. However, we did a mixed Q&A panel with all speakers simultaneously which was not only a great compromise, it also allowed the speakers to build on each others answers. 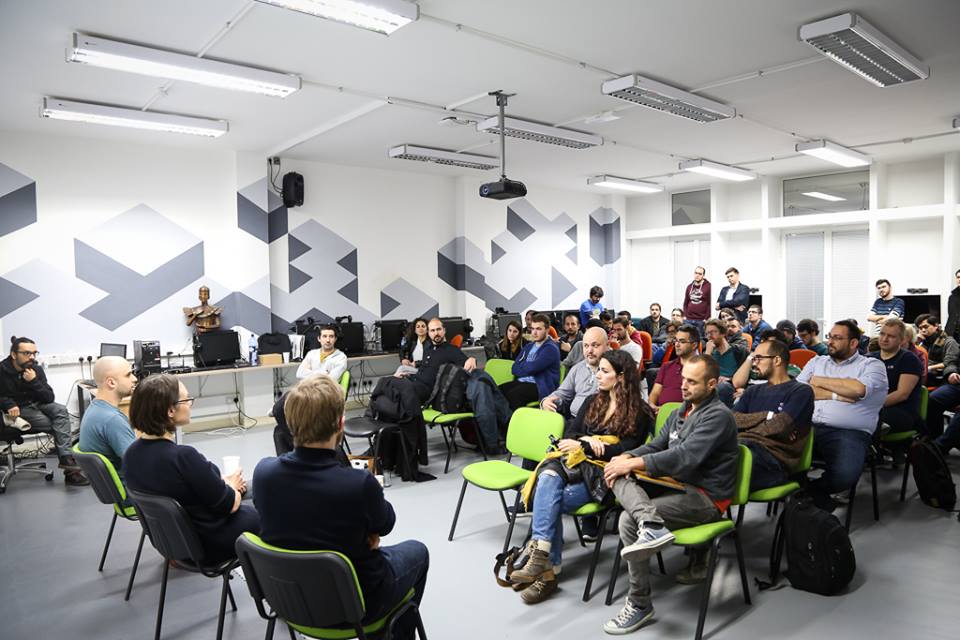 The keynotes were a brilliant balance of technology, narrative, and design. We even managed to LiveStream on Twitch with a reasonable quality stream. Speakers were understandable and video feed didn’t falter, but we didn’t have exceptionally high standards for our stream.

Mike Cook was the first keynote speaker and he presented "Make Your Game Jam Smarter, Healthier And Weirder With Procedural Generation", where he explained how to use templates to make your work as a game designer more interesting and less stressful.

He was followed by Emily Short, who presented "Matching Story and Mechanics" where she surveyed brainstorming techniques and common design moves to bring game and story concepts together quickly.

Our last keynote speaker, Matt Binkowski presented "How we balanced Dying Light and how I fucked it up" where he shared the process behind balancing Dying Light and the lessons he learned from that process. 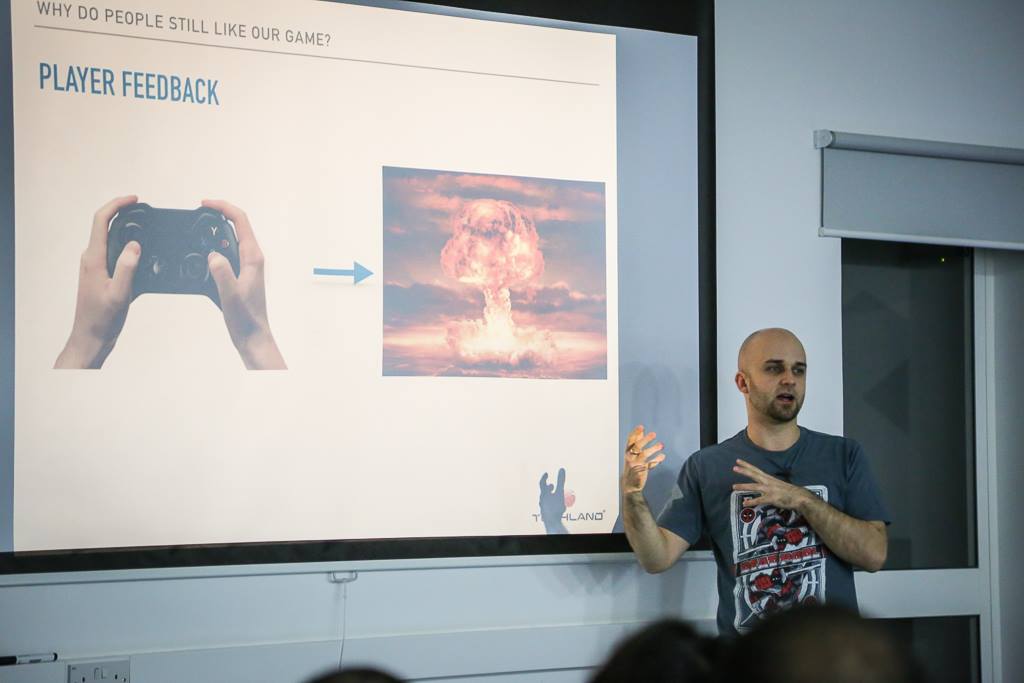 Matt Binkowski explaining what he wanted a player to feel like when pressing a button. Photo: Daniel Karavolos

Part of the fun of the Game Jam is meeting new people and trying new things, but we know it isn’t easy to do that. It doesn’t come naturally to everyone. So in order to help people find a group they can click with we do some guided brainstorming on the theme. This helps people see whose ideas they like and puts them in a position where they will need to communicate and exchange ideas.

It’s natural for people to form cliques, but these become little self-contained silos where jammers sit inside and warm their hands with the fire of familiarity. While nice and comfortable, this might result in a team with only artists because they all studied together or a bunch of programmers that work together. So we divided them up into smaller teams to brainstorm, many times, until their resolve was broken and they were (hopefully) all moderately familiar with each other and their skillsets. For example, we divided the group into artists, programmers, sound designers, writers in one case and students and professionals in another case, car license and no car license as well just dividing them based on game design element cards that we gave them.

Step 2: Put them to Work

We used cards with game design elements as prompts for brainstorming. Since the theme was already announced at this point, we gave jammers a random combination of game design elements and asked them to propose a game using those elements related to the theme. The purpose to this was two-fold. Firstly, jammers could get to know each other and their ideas and join a person whose idea they like (in a way replacing the pitching sessions many jams have) and secondly, while team formation was happening jammers were still thinking about the theme and exploring possible games. 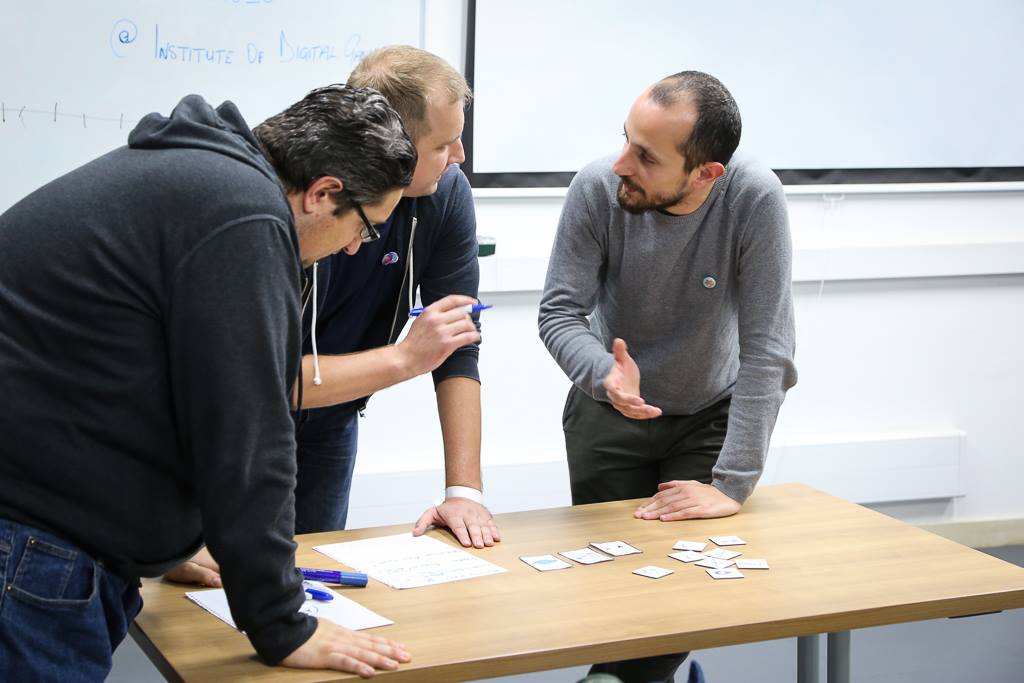 A brainstorming session to break the ice during group formation. Photo: Daniel Karavolos

At a certain point it comes time for us to step back and let the jammers organise themselves. Like good parents, it came time to let out jammers find their own place in the world without interference from us. 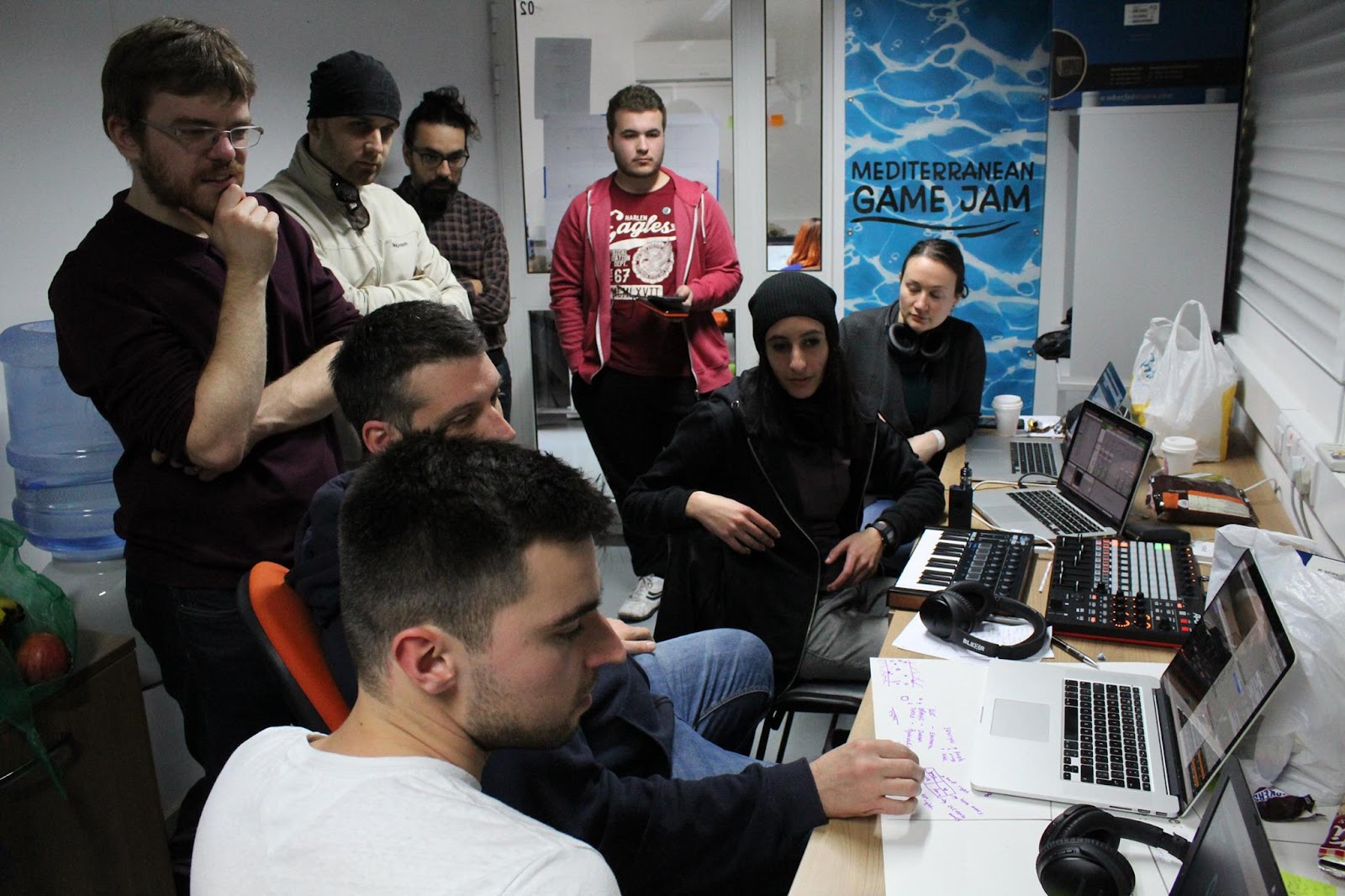 Something. Always. Goes. Wrong. With. Wifi.  In this case it was that we had made guest accounts, but they were per device and people were connecting multiple devices so we ran out very quickly. Understand your Wifi, have spares, and if possible have tech support available. 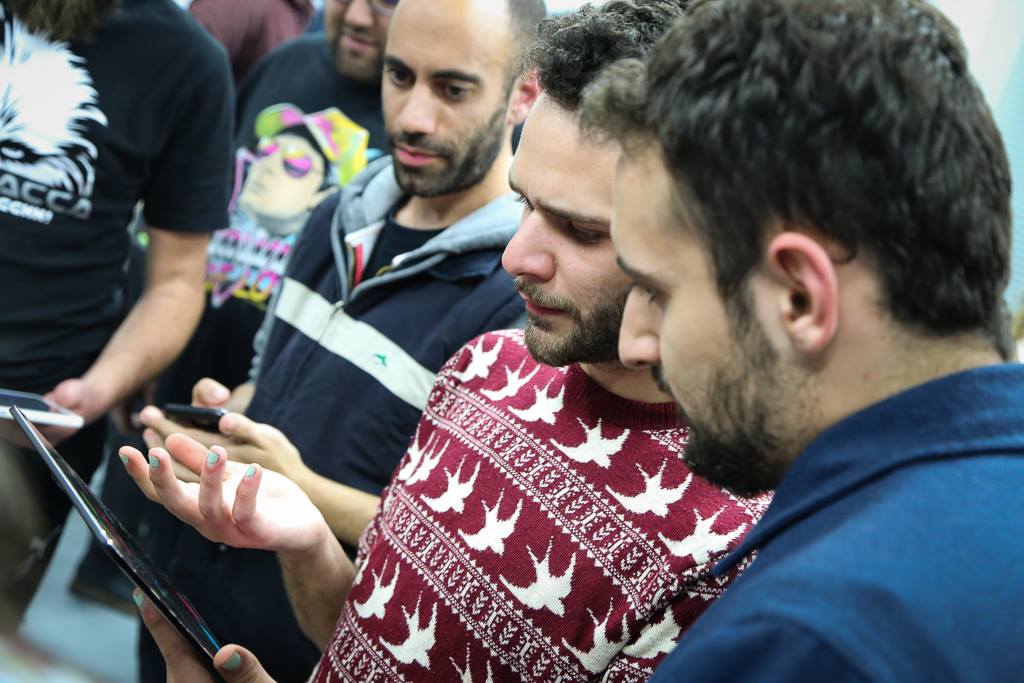 Remember that brilliant idea about the badges we mentioned earlier? The concept behind the badges was that we would have 3 different badges to facilitate interaction: Jammer, Crew, and Random.

Everyone received a Jammer badge, the volunteers and staff received a Crew badge so people would know who to approach for questions and those people that were looking to join a team were given a Random badge to show they were on the lookout for a team. It turns out the 25mm is even smaller than it sounds.

The badges were a bit too tiny. Luckily the colors were different enough to tell the difference, but if you wanted to read them you had to get very close. Who knows? This might have actually been an advantage, bringing people closer together. Print bigger badges though, really.

We ran out of tables and chairs. When crunch time came and everyone was at the location, suddenly it became a Mad Max post-apocalyptic world where tables and chairs were the only valid currency. 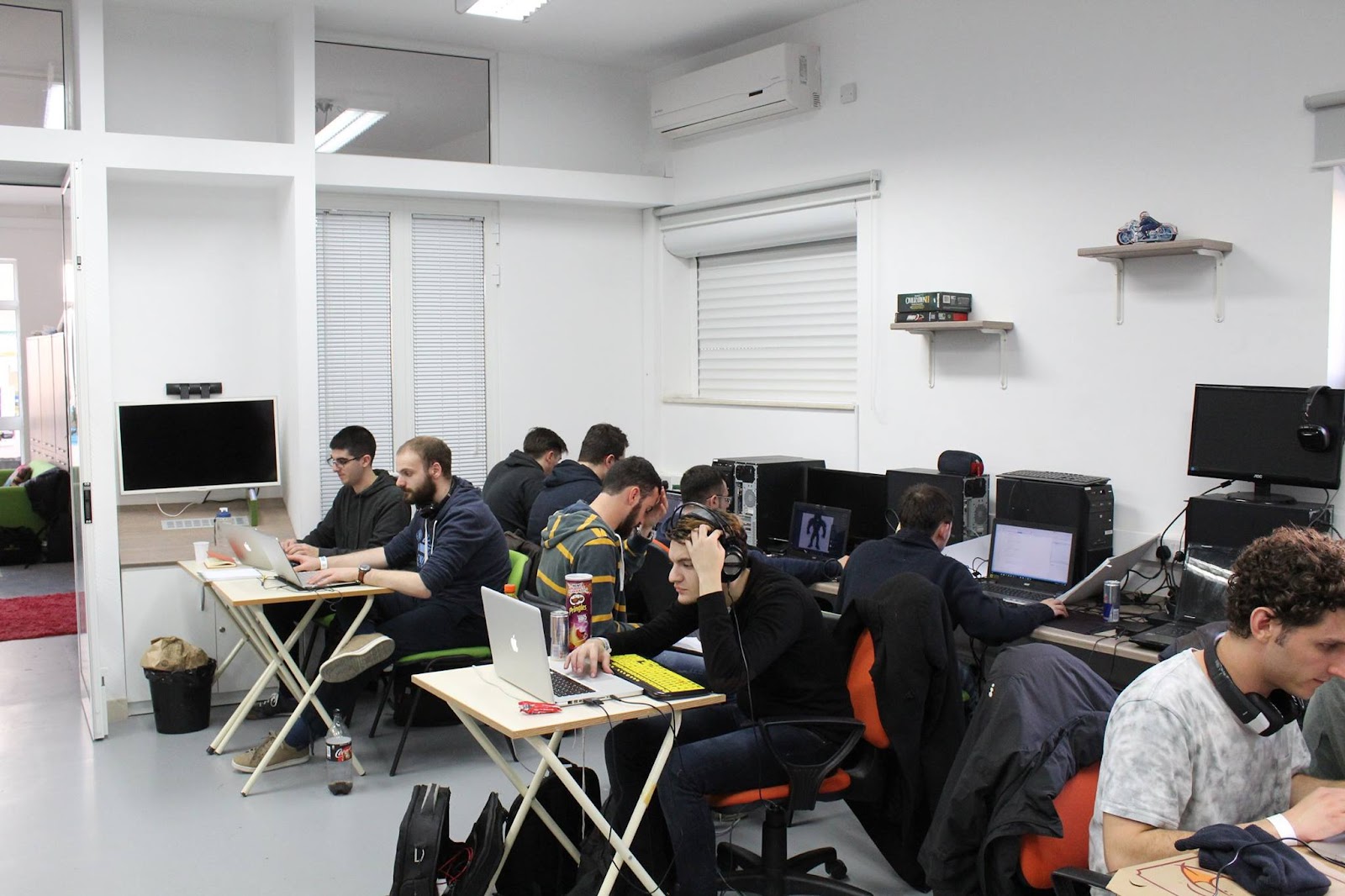 These jammers later sold their foldable tables and retired on a distant tropical island sipping mojitos in their mansions. Photo: Jeremy Grech 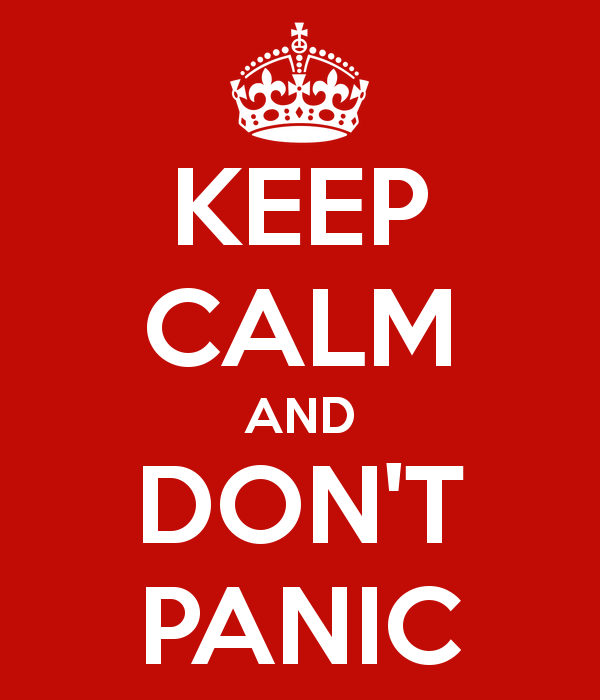 After getting pumped from the three great keynote we were ready to ride the wave of excitement onto the announcement of the theme. We opened up Slack and clicked on the video link. Only to have it turn out to play the theme announcement of 2017. Frantically we shouted: “Call Sicily! Anyone in contact with Jammers from somewhere else in our time zone?” When the panic subsided we finally found the 2018 video right there in front of us. So let that be a lesson to all organisers: Don’t Panic. Ever. (Or note down another Jam Site’s contact details so you can call them when you’re panicking?)

As organisers our focus of the Malta Global Game Jam is the experience of making the game and of going through the stressful development cycle together. At the end we do an Arcade Mode where everyone plays each other’s games and we have a winner by popular vote. There is no judgement about whether it is the best game, it is just the game that the jammers enjoyed the most on the day. 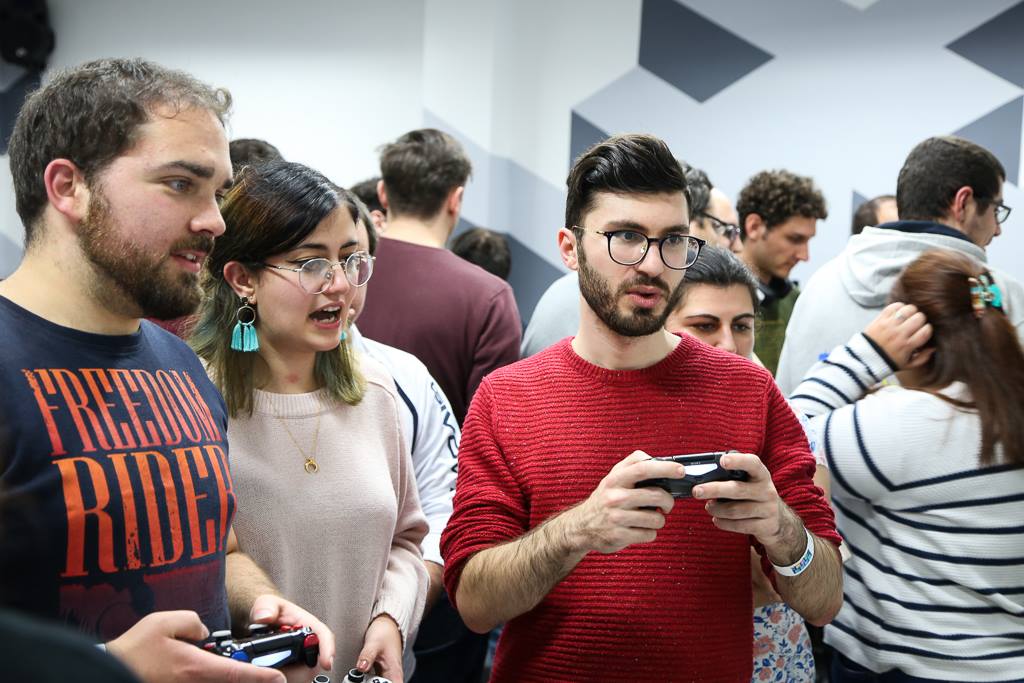 And they lived happily ever after

Once our kind volunteers helped with the clean up and we closed the venue we went home and passed out. In sleepless delirium (definitely absent of all rational thought) we smiled to ourselves and nodded thinking: “Next year let’s do that again, it wasn’t so bad.” 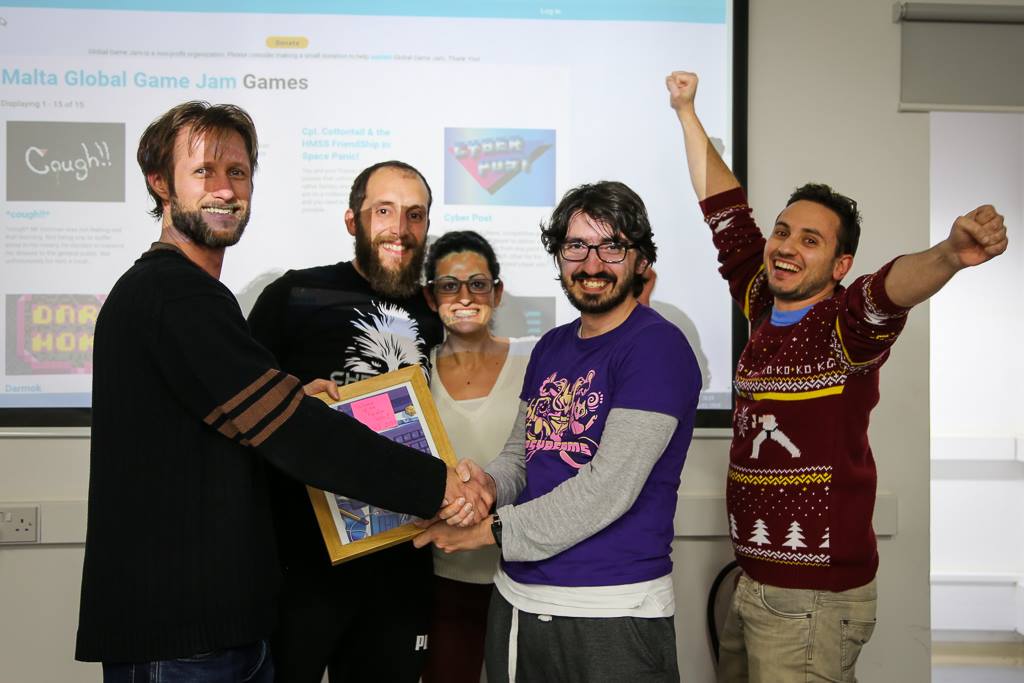 Team being handed the coveted Popular Vote prize at the end of the Jam. Photo: Daniel Karavolos

All the games of the Malta Site: [https://globalgamejam.org/2018/jam-sites/malta-global-game-jam/games]