This article starts the whole series of articles devoted to the analysis of paying users.
Eugene Matveev
Blogger
October 22, 2015

So, paying users are those guys that bring money to your product. It is very important to know all the nuances of their behavior: what do they pay for, how fast and how much. It is important to know what they feel by doing this, do they get satisfaction from the investments they made into your product. In fact, even in the case of f2p online-game every payment made by gamers is their investment: at the beginning they pay, at the end they get some ROI, which can be denominated in a currency or in the emotions they experience. Therefore, you should perceive users as investors even if they are minority investors.

In order to better understand the behavior, distribution and needs of paying users there exist special analytical methods and reports. Today we will talk about RFM-analysis as one of the basic methods of understanding the structure of your paying audience.

R – Recency – how long ago the last purchase was made;

F – Frequency – how often purchases were made;

M – Monetary – the volume of purchases during all the time.

You give three marks that correspond to those parameters to every paying user. As a rule, in theoretical materials a user is assessed with a three-point scale (relatively speaking: good, normal, bad), however in practice we have also faced five- or even ten-point scales in RFM-analysis. To make it easier, let's look at the example of the three-point system:

Of course, the question arises: how to understand in this case long time ago/recently, often/rarely and much/little. It is possible to answer this question in two ways:

Anyway, having spent some time in Excel (or somewhere else), you will give a mark to every paying user for recency, frequency and amount of payments.

Now is the most interesting part.

You can see how those marks are distributed among your paying users and what are the majority of users. This will allow you to segment your paying audience and plan your marketing actions aimed at raising profit.

Both of discussed examples operate only two parameters: Recency, Frequency.

Adding the Monetary parameter to the report will allow to use volumes of every user's payments in addition.

Besides that, the analysis can be conducted based on the quantity of users or based on money that you get from them. 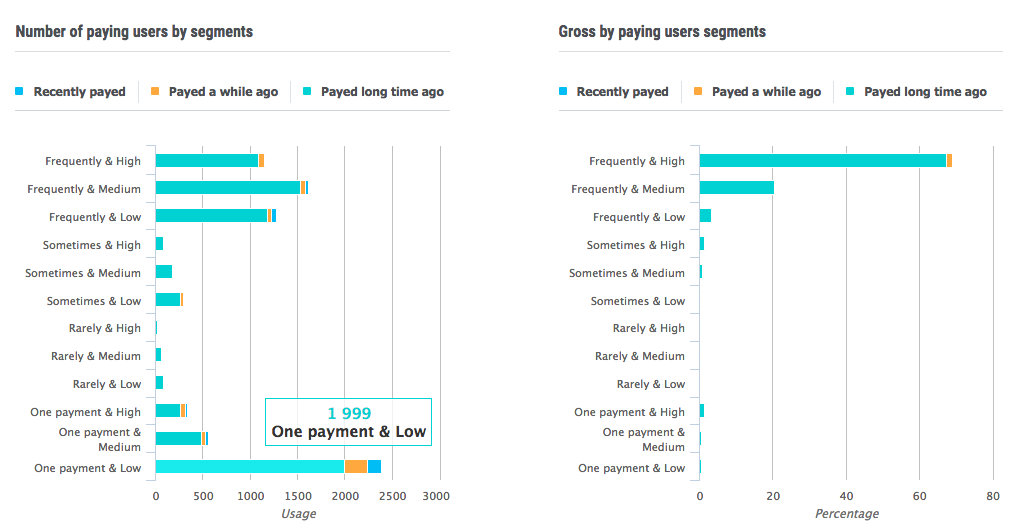 The easiest way is to analyze paying users in the frames of one parameter is to get distribution of users and their payments depending on time (long time ago – recently), on frequency (often – sometimes – rarely), on amount (much – average – little).

In particular, analysis of paying users according to the size of their payment in f2p-games is usually described with the help of the inhabitants of sea depths:

Here we don't speak about the sums of one payment but rather about general sums accumulated during the whole payment history of a user. The differentiation on big, average and small sums is made based on expert assessment again. 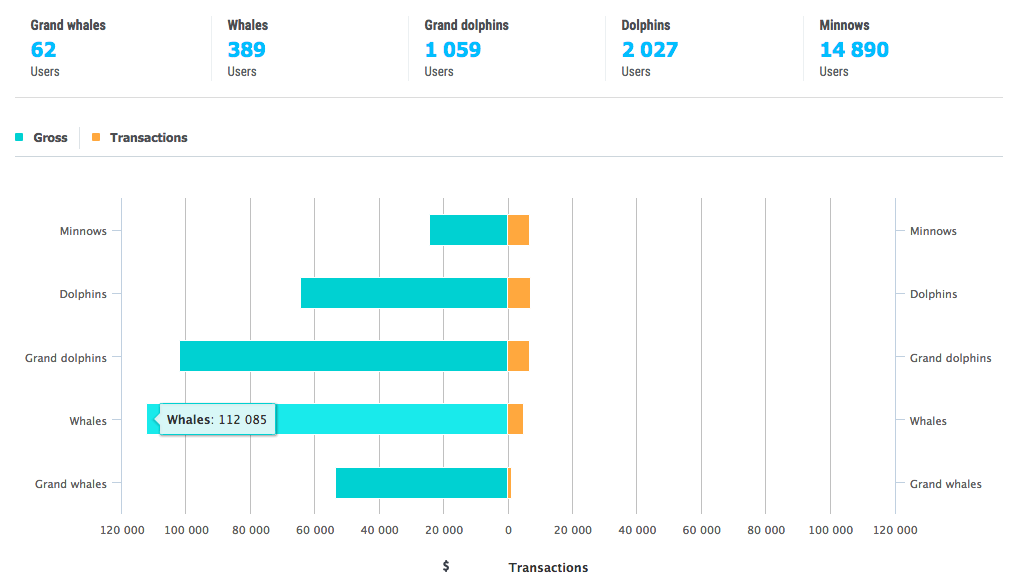 This is only a part of methods that can be used to analyze paying users. There are many more questions, answers to which will help you to customize your project's monetization better. There are only some of them:

We will surely tell you about every method in detail in our future articles.