The primary goal of any app developer is to grow and maintain their user base. The two metrics that we can use to predict an app’s growth over time are installs and retention. Learn more in this how-to post.
Jeb Balise
Blogger
February 02, 2016

The primary goal of any app developer is to grow and maintain their user base. An app that fails to grow or maintain its user base cannot survive because it will eventually have no users, so developers set growth goals to be able to track how their app is growing over time. The two metrics that we can use to predict an app’s growth over time are installs and retention.

Installs are the number of users that download your app on a given day (day 0). Retention is the metric that shows how many of the users come back to an app after they install it (day 1-N). The following is a demonstration of how different retention rates affect a developer’s ability to grow.

All of the apps have the same retention for days 1-7 and App 3 got roughly half the number of installs as apps 1 and 2. Which app do you think had the most users on day 120?

We can predict Daily Active User (DAU) growth with near perfect accuracy if we know the number of installs we get and the daily retention rate for those installs. Here’s how it works:

We can then say that an app that gets 100 installs per day and has a day 1 retention = 50% and a day 2 retention = 25% will have 175 users at the end of the third day (assuming day 0 was the install date). Understanding DAU growth beyond 3 days is no different and will allow you to predict with near certainty the trajectory of your app’s growth over time.

For the three apps in the example above, this chart was simply lengthened by 120 days in a model to predict future growth. Notably, the app with best long term retention ended up with the biggest user base after 120 days even though the developer acquired half as many users as the other two developers. The complete model is available here.

How to Acquire High Retention Installs In Order to Grow

With the goal of growth, developers look to acquire users from ad networks that can provide them with the highest-retention installs. One of our favorite networks we use to acquire users for our app Daily Celebrity Crossword is AppLovin, because it’s a network that has a real-time feedback loop to make sure we are only showing ads to users who are likely to install and retain in our game.

Querying our data to create a daily retention curve (using Mixpanel) for new iOS users who came in from AppLovin in early October - we can see that 60 days later more than 20% of the users we acquired are still playing our game. More importantly, we see that our retention curve has flattened meaning there is a likelihood that these users will continue to stick with our game.

By acquiring high retention installs through companies such as AppLovin we’re able to maximize our growth. 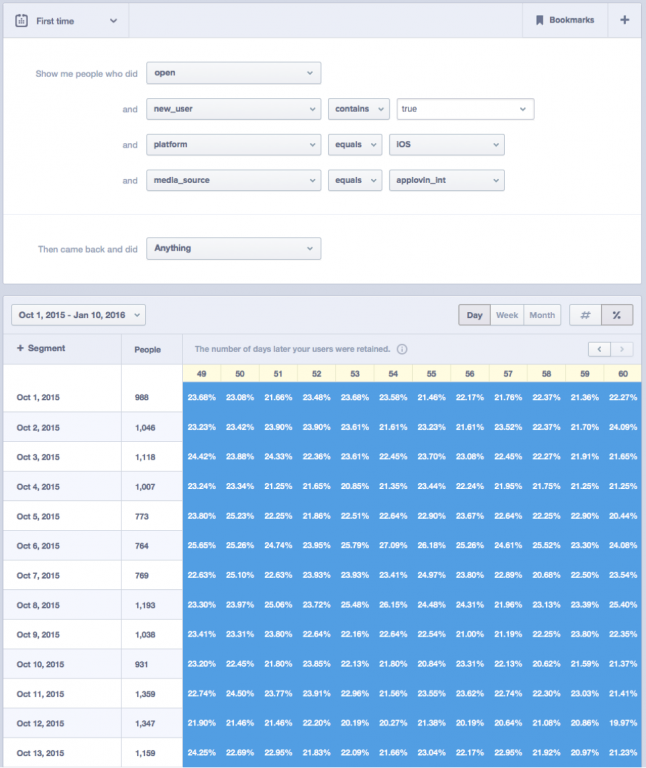 Retention is what provides an app company the chance to grow. Making an app that people want to come back to is the best way to achieve high retention, but growing an app over time requires marketing to potential users who are likely to retain in your app.

A first time app developer’s favorite question is “How much does it cost to acquire a user?” because they have a vision of an app that everyone in the world will one day use, and they want to know how much it will cost for them to achieve their vision quickly. It puts the business focus on how to spend money marketing their product rather than building a product that users want to come back to. As shown above, installs only lead to growth when they retain.

The better question for a first time app developer is “What rate do the users we acquire come back to our app?” Don’t spend a lot of money marketing a product if you’re unsure about if the users you acquire value your product enough to come back to it. Go back to the whiteboard and rebuild. You can always release a next version.