Game development has changed significantly in the last twenty years, and as many developers push through a daunting discoverability problem it's worth taking a moment to study how others have adapted to thrive in the midst of that ol' "indiepocalypse."

Schaefer and Baldree are best known for helping to found Torchlight developer Runic Games in 2008, but each had been making games for nearly a decade by that point -- together, at Flagship Studios (Hellgate: London) and apart: Baldree at WildTangent (Fate) and Schaefer at Blizzard North (Diablo).

That's a long way of saying they've been doing this for a while. Each has a number of award-winning titles under their belt and, more importantly in an industry where developers are too often measured by the strength of their last game, they've just achieved success in an overcrowded market.

When I spoke to Baldree and Schaefer via Skype recently, they attributed their success to three things: a succinct and memorable pitch (“Firefly meets Black Flag”), striking character/ship design and a kickass soundtrack. I’d add a fourth to that list: Canny use of (relatively) new game dev tools like Twitch and the Unity Asset Store.

Shop for artists on the Asset Store

Rebel Galaxy isn’t actually a Unity game -- it’s built on a heavily modified version of the open-source Ogre3D engine that also underpins Torchlight. But when it came time to fill the game with art assets, Baldree and Schaefer didn’t try to do it themselves or contract with an art house to find suitable artists -- they just started cruising the Unity Asset Store for talent.

“It’s filled with people who can ship game-usable assets, so you know they aren’t just making portfolio pieces that aren’t usable. You can actually pay to download the assets they make, look at the construction of the mesh, and see if you want to work with them,” Baldree tells me. “The guy who did all our spaceships, I got him that way. He was awesome, I loved working with him, and I never would have found him otherwise.” 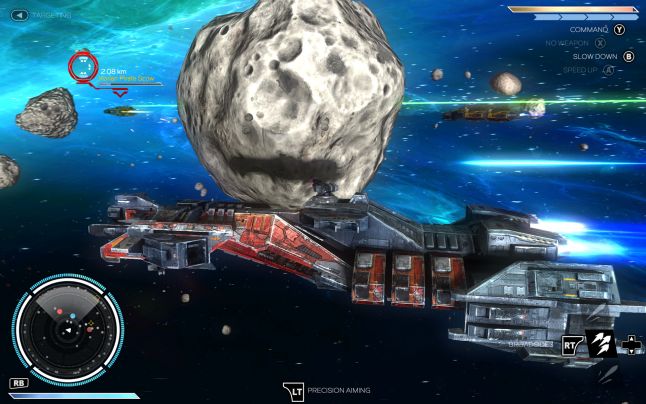 Baldree recommends it to fellow indies because contacting individual contractors directly proved far more affordable for Double Damage than going through an art house, which would have been too expensive and too much of a hassle for the Double Damage duo.

“An art house, they take their chunk off the top, and then you have a go-between or a manager you’re probably also paying,” notes Baldree. “This was so much more straightforward.”

Double Damage didn’t just commission original work, either -- in some cases Baldree paid an artist for work they’d already done so he could quickly license it for non-exclusive use in Rebel Galaxy, even though that means you might someday stumble across the same art in another game.

“I found someone who makes awesome nebula art -- that’s like, all he does -- and I told him I’d pay him his hourly rate for however it long it had taken him to make these nebulae, just to have them right now,” adds Baldree. “That’s all I wanted -- I don’t care if anyone else uses his lovely nebulae, as long as I get to.”

The Unity Asset Store is designed to be a place where developers can buy readymade assets, so in some sense this is just using it as intended, but it’s interesting that Baldree sees it less as a market for assets than a market for talent. From that perspective, it becomes a useful resource for developers of all stripes -- not just those who work in Unity.

"We originally just had kind of generic epic space music, and I was listening to the Black Keys one day and I just thought ‘Man, this sounds way better.'"

Baldree and Schaefer took a similar “pay for what you want” approach in producing the Rebel Galaxy soundtrack, which is characterized by a sort of “space cowboy” blues guitar aesthetic that they (and many reviewers) now cite as a critical part of the game’s appeal.

“We originally just had kind of generic epic space music, and I was listening to the Black Keys one day and I just thought ‘Man, this sounds way better,’” Baldree told me. “So I asked Eric if we could just license a bunch of garage blues tracks, and he was like ‘...maybe?’ So we tried putting 'em in, and it just worked out really well.”

The upside? With comparatively little trouble, the pair were able to ship a game with a striking soundtrack -- it’s the kind of music you’ll either love or hate, and either way you can’t help but notice it. The downside is that Double Damage can’t really sell a Rebel Galaxy soundtrack, due to the tricky nature of licensing tracks -- a problem that came to light once the studio started handing out builds to streamers and people started to ask about the music. 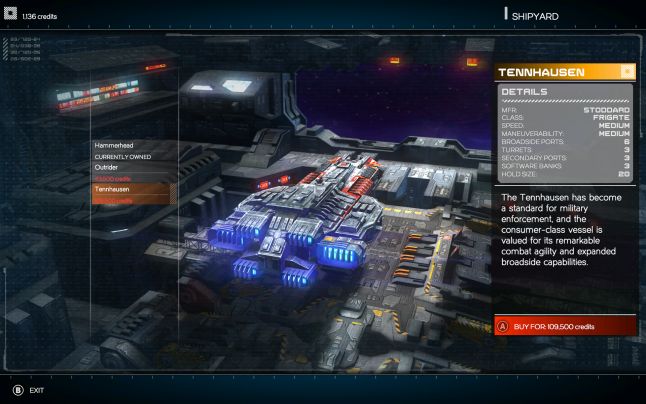 Both Schaefer and Baldree seem surprised at how much mileage they got out of sending builds of Rebel Galaxy to streamers ahead of release and letting them do whatever they wanted with the game. It brought them a nice chunk of popular attention and probably sold a lot of copies, but it also gave them an unexpected opportunity to playtest the game for free.

“The rise of streaming has changed the way we make games,” says Baldree. “We adapted to it because it was cheaper for us, but it seems like it's the way to go. When we first launched Torchlight...we did the traditional thing: we went to all these outlets, we did all these ad buys. We did none of that this time, and....it's so much easier!”

“Yeah, it’s very different -- we had a bigger splash with this game than we did with Torchlight, which had a bunch of very traditional marketing behind it,” chimes in Schaefer. “Streaming, social media, and just the reviews on Steam, seem to kind of be important now and so we're lucky it's working for us.”

Schaefer and Baldree tell me Rebel Galaxy sold upwards of 75,000 copies on Steam in its first week of release, beating their “pessimistic predictions” and leaving them hopeful that, by the time it comes to Xbox One and PlayStation 4, Double Damage will have hit the ground running with a winning debut and effectively zero marketing spend.

“We stopped worrying about press reviews quite as much, at least I did, because it seemed like Steam reviews and people talking about a game on Twitter and on Twitch did a lot more to drive it,” says Baldree. “And just being on Steam's front page -- that's a lot of people and a lot of eyes.”

As a quick aside, it’s worth noting that Baldree and Schaefer received what they believe to be a key bit of advice from Valve about finding success on Steam: Don’t do pre-orders. It will dilute your sales at launch, reducing your chances of getting into the top-selling chart on Steam’s front page.

“That's what Valve really recommended -- you get a better day-one splash if you don't take pre-orders,” says Schaefer. “They said we should just do a release day release and get going, so it would shoot us up to the number one spot on the sales charts for a while. And just hitting the #1 spot makes people sit up and take notice.”

(Incidentally, trawling Steam’s top charts is something I do all the time.)

Nobody at Double Damage knows exactly what slice of Rebel Galaxy sales come from word-of-mouth vs. media attention vs. streamers, but Travis and Baldree do now know that handing out early builds of your game to streamers months before ship is a great way to get playtesting done for free. 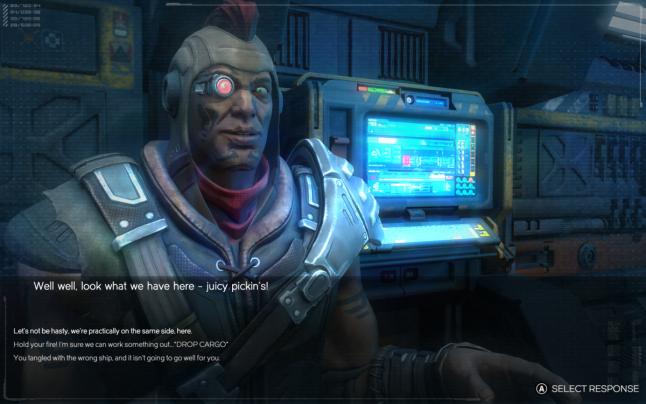 “It turned out to be really useful to watch people play on Twitch and make mistakes. It was like having a huge testing lab or something, except it was free,” says Baldree. “We had a bunch of people streaming, giving people a look at the game, and it allowed us to answer a lot of questions about what the game was and get a lot of communication.”

That feedback helped them refine problematic areas of the game's design, including the in-game economy, which Schaefer remembers as a particularly tricky thing to get right.

"It was a challenge to balance out an economic game rather than a loot-finding game," he tells me, noting that he's had some version of a space game design doc kicking around in his head since his days at Blizzard North.

"I've been trying to make a space game forever -- I actually have an old spec document that we were trying to get publishers for back at Blizzard, pre-Diablo, and it wasn't too far from this," says Schaefer. "When we started, I envisioned it as a loot finder -- you go out, kill spaceships and get loot, like in Torchlight or Diablo. But Travis suggested we make it about economic progression, and I liked that."

So how do you balance the economy of a game like this? "Play the hell out of the game," Schaefer says, with a laugh. "That helps you know what to shift, and where. Make a good initial estimate, and just do a lot of iteration."