In a new blog post, Microsoft has finally shown has its backwards compatibility upgrades will look on screen.
Chris Kerr
News Editor
October 13, 2020

Microsoft has spent the past year reminding consumers that its next-gen Xbox Series X and S will be backwards compatibility beasts.

We've been told how thousands of games from four generations of Xbox consoles will be playable when both consoles launch on November 10, and how those older titles will run natively on the Series X and S "by utilizing the full power of the CPU, GPU, and the SSD."

That means players will see notable frame rate bumps, load time reductions, and HDR whenever they dip back into an old favorite on the Series X or S, and in a new blog post the company has finally shown how those upgrades will look on screen.

Detailing the Auto HDR feature, the company explained how it will "enhance the visual quality of an SDR game without changing the original artistic intent." It also revealed that Auto HDR is implemented by the system so devs won't have to do any extra legwork to use the feature, which in turn means there's "absolutely no performance cost to the CPU, GPU or memory and there is no additional latency added." 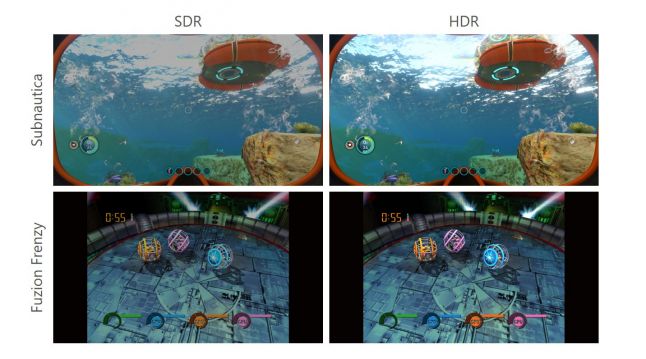 Another image (shown below), showcases how the Heutchy method will be used to run Xbox 360 titles and original Xbox titles that rendered at 720p and 360p respectively to play at 1440p on Xbox Series S and 4K on Xbox Series X.

Finally, a comparison video highlights how the Xbox Series S can breath new life into select older titles by doubling frame rates. Using Fallout 4 as an example, Microsoft shows how it intends to leverage the extra CPU, GPU, and memory in its new consoles to push game engines forwards and deliver a "buttery smooth experience" beyond the capabilities of its older hardware.

For more insights into how backwards compatibility is shaping up on the Xbox Series S and X, check out the full Xbox Wire blog post.