How can Street Fighter evolve from a core console game into a thriving service-based eSport? Gamasutra speaks to Capcom's Matt Dahlgren about the company's next big play.
Christian Nutt
Blogger
July 24, 2015

Last night, Street Fighter V went into its first beta test, ahead of its 2016 release. The latest game in the franchise enters a markedly different world than Street Fighter IV did when it "reinvigorated the whole fighting game scene," to use the (accurate) words of Capcom USA's associate director of brand marketing and eSports, Matt Dahlgren.

This beta, the first public test of the new game's net code, is an early step in transforming the franchise from a classic console-based game into a "platform," as Dahlgren would have it -- a service that players will live with for years to come, and even, maybe, a truly significant eSport. [Note: The beta has run into some snags.]

Street Fighter V will only ever have one disc release; new characters will be continually released (presumably, indefinitely) and can be purchased with two different currencies: a premium cash currency, and one earned via play. Balance fixes and patches will, of course, be free. Dahlgren describes this as a "consumer-friendly business model." The influence of Riot's League of Legends is clear. 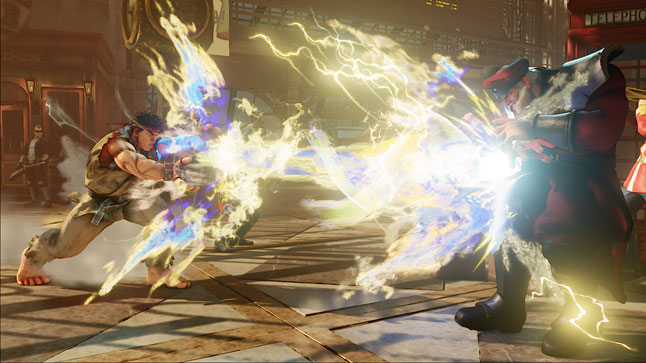 As a franchise, Street Fighter has an unusual history; after its meteoric rise to popularity in the early 1990s, the franchise crashed, and Capcom ignored it for years. Though Capcom is a Japanese company, and the games are still made in Japan, responsibility for the franchise rests with its owner: Capcom USA. North America is also the "strongest territory" for Street Fighter, Dahlgren says.

"The fighting game team at Capcom USA handles all aspects of the Street Fighter brand," he says. "From working at the Capcom USA office, I obviously love it, because we have a lot of influence over what happens and we have a really great relationship with R&D and the team in Japan. We can collaborate."

It's clear Dahlgren takes this responsibility seriously. Capcom is betting a lot on Street Fighter V -- and even though it's leaning on Sony to do so, Dahlgren's hype only underscores the company's ambition for the game:

"Street Fighter is the mother of all fighting games. It's one of our strongest franchises within Capcom. This is our opportunity to really get everything right. I believe that the formula for Street Fighter has been a really successful one over time, but we haven't had all of the elements put together in one package," he says.

Capcom clearly intends Street Fighter V to be that package; the possibility of "massive growth" of the franchise's popularity and the relevance of Street Fighter as a marquee eSports title -- the company is actively expanding the prize pool and doubling the finalist slots for its Capcom Pro Tour this year -- is what is driving the company toward the goal.

"Every numbered iteration of Street Fighter is brand-new, so we don't reuse elements from the previous games," says Dahlgren. There's also that need to think of the game as a "platform," which is reflected in the way that Dahlgren talks about it: "we want to make sure our infrastructure is really, really solid," he says -- hence the early beta.

This all makes sense when you think of Street Fighter V as a service, which Capcom now does; Dahlgren promises that it is "something that's going to grow over time."

"We want to create a new era of fighting games. We'll start off a little bit on the small side, but this thing is going to be a game that delivers a lot of awesome fighting game fun for many years," he says.

And how will it do that? "This is a game that removes different elements from Street Fighter that people have not liked," Dahlgren says, following it up with an awkward laugh. "That's probably a bad way of phrasing that. Basically, we've gone back and looked at the previous iterations of Street Fighter and the elements that were the most popular, that we could layer in to create Street Fighter V." 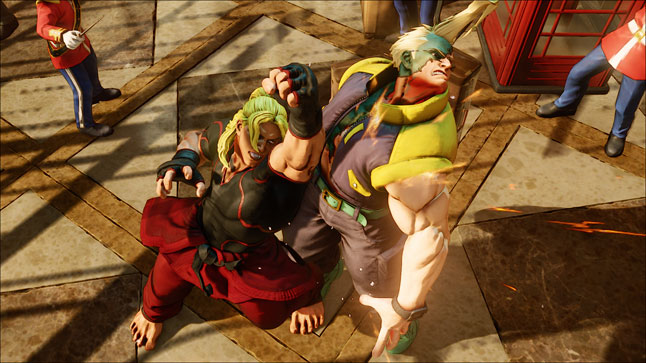 When you have no choice but to appeal to everyone

"From our standpoint, we want something that is going to be able to grow over time."

Street Fighter IV was an eagerly anticipated underdog; it also reestablished the franchise as a triple-A stalwart. Street Fighter V, then, absolutely must make a massive impact -- and attract both more pros and more novices.

"We want to make sure that Street Fighter is inviting to new players and not too daunting up-front; it's easy to be understood, but yet it still retains the complexity and that mental chess game that the pro players really love," Dahlgren says. But how?

Some of that hinges on the new game's Variable System, which offers some easy-to-execute but impactful moves: "Newcomers will be able to have access to at least one V-Trigger every single round. It will power them up, let them really unleash their true force, and yet still, complex things like double fireball motions to execute Critical Arts can be the next evolution in that player's progress," Dahlgren says.

Perhaps most importantly, though, some characters' V-skills will offer advanced strategies, while others will be flashy and easy-to-use. "The core gameplay mechanic of Third Strike was parrying. Now, that core gameplay mechanic is just Ryu's V-Skill. So that's just one character's move and that whole thing is built into it. ... So it's looking back that those classic Street Fighter moments and the things that were strong in each iteration of the game and trying to layer those into Street Fighter V."

But easy-to-execute moves that are too powerful could throw off the game's balance, something the developer has to put a tremendous emphasis on now that Street Fighter V is envisioned from the ground up as a pro competitive game.

"Fighting games are something that is going to evolve over time; we just need to make sure that we have a very solid engine in place and we're paying attention to what our fans want," Dahlgren says.

"Gameplay balance is something that's going to be absolutely critical to a fighting game. ... You want to take your best stab at getting it right but have enough complexity for the players to layer on top of it."

"Gameplay balance is something that's going to be absolutely critical to a fighting game. You want to create a good base platform that's fair for everyone to compete. You want to take your best stab at getting it right but have enough complexity for the players to layer on top of it."

Balance is a tricky thing, though: "With fighting games, you don't want to nerf things too quickly; if people find out effective strategies you want to let that have some room to breathe," Dahlgren says.

"Sometimes companies will freak out and patch a game too quickly, and it prevents a beautiful gameplay dynamic from formulating. Sometimes you need something powerful to figure out how to counter it, and it allows it to layer on. We have a lot of experience with balancing our products, and it's always a huge process."

So can games become over-balanced? "I definitely think so," says Dahlgren. "You have to look at things from a player perspective. They invest a lot of time and resources into practicing the game and learning the system, and figuring out, essentially, how to break it down. If every time someone finds out something that's innovative, you take it out of the game, you're preventing the players' creativity."

"The beauty of a good fighting game is something that takes a long time for all of the elements to be figured out. The technology that our fans are able to find and exploit, sometimes it takes them two to three years to discover something's even possible. If you're constantly going in there, taking away options from your players when they figure something out because you're worried it's going to be effective, you're preventing your engine from growing."

But can certain moves be too cheap? Dahlgren doesn't think so: "It's like the common fighting game thing: 'Oh, that's cheap.' Nothing's cheap; it's just effective," he says, with a laugh. "You need to have the mentality of, 'Oh, that's effective. I just need to do better.' And it's like, that is what creates the layers on top of each other."

But unbalanced is another thing. "Sometimes things are too powerful. If something's way too powerful, the game becomes monotonous, everyone's picking one character, it's clearly one-sided, then yeah, you probably need to make a shift." 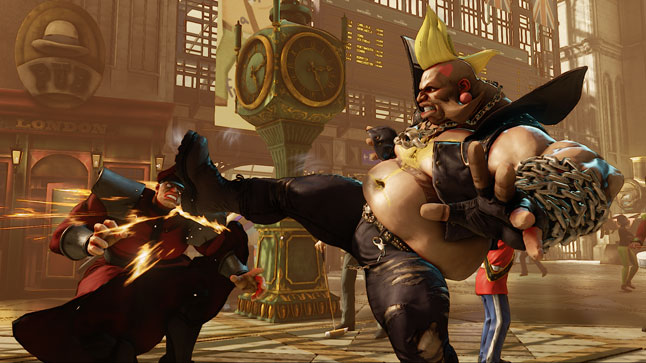 When you really need to "make a shift"

Balance is one thing; there are more significant problems, such as those that struck the latest release in the series: Ultra Street Fighter IV for the PlayStation 4 (which was not developed by Capcom and was, in fact, published by Sony) had tons of serious bugs.

How do you deal with a situation like that?

"As long as you stick with it and you're committed to making sure your quality level is high, you can make decisions quickl."

"There are always hiccups in game development. It just happens across the industry. You just have to pay attention and be very nimble," Dahlgren says. "I really applaud the team at Sony for sticking with it for Ultra Street Fighter IV. It only took them a couple of weeks; they brought pro players into the office to test it out. They paid attention to all of the comments that were made."

"It was a really bumpy start, but as long as you stick with it and you're committed to making sure your quality level is high, you can make decisions quickly. ... in terms of anything that affects your online infrastructure or anything that affects the play of the game, you've got to show that progress very, very fast, and you need to make sure you're always working on it and that it always lives up to everyone's expectations," he says.

Time will tell if Street Fighter V will be the game -- no, the platform, the service -- that Capcom needs it to be. But this beta test is the first step on that road -- a long one. 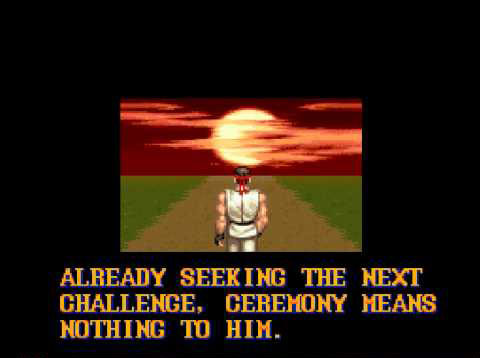