Can a "mainstream" indie game survive the Greenlight process? The creator of Chess Heroes has his doubts.
Ted Brown
Blogger
October 23, 2013

I am the sole game developer on a game called Chess Heroes, a modern take on chess that is heavily influenced by modern video games. It is my best and possibly final attempt at achieving "indie freedom," which I define as "selling enough of a game to fund the next one." I'm closing in on the fifth month of development, with two expos under my belt and a public demo only days away. And to be honest: with Unity and Photoshop and Blender and a few years of experience under my belt, creating the game is actually the easiest part.

The immediate response for both is often "Steam Greenlight," which is where the confusion begins. Greenlight only gives you a week of exposure, but then you are on your own (which is fair). But more importantly, people don't buy your game on Greenlight, they buy it on Steam, which can only happen if Valve notes a surge of popularity surrounding your game compared to others in its midst.

This is a definite problem if your game doesn't have a heart-pounding premise, attention-grabbing graphics, and craftsmanship that can only be felt by actually playing the game. I go to expos because playing Chess Heroes converts skeptics into believers, and generates real excitement (that I finally had the sense to capture on video). So if playing it is important, and there is no demo link on Greenlight, and people who are interested can't buy it there, I'm forced to demo and sell it somewhere else in hopes I can sell it on Steam later. Which is weird.

To be fair, I know Steam is a brand that adds value, and it adds value because it's been protected by processes like Greenlight. It just puts indies in awkward situations where they spend enormous amounts of time building marketing networks instead of creating games. I'm a big boy; I know this is the real world and that's how things work. But I'm also a craftsman who just wants to disappear into a workshop for months at a time, emerge with something shiny, put it on a shelf with a price tag, talk about it for a bit, then vanish again in a hurricane of odd tweets, homebrew in hand and headphones on high.

That was the heart-revealing part. Now let's get down to business.

My Greenlight Experience (So Far)

My stumble onto the Greenlight stage has been documented, and the dust has settled (meaning there is only nominal activity on the page), giving me a good chance to look for patterns and analyze external effects, such as advertising.

The first thing to check is the status of my "cohorts" that were released the same week. I can do this thanks to a blog called Greenlight Groove. 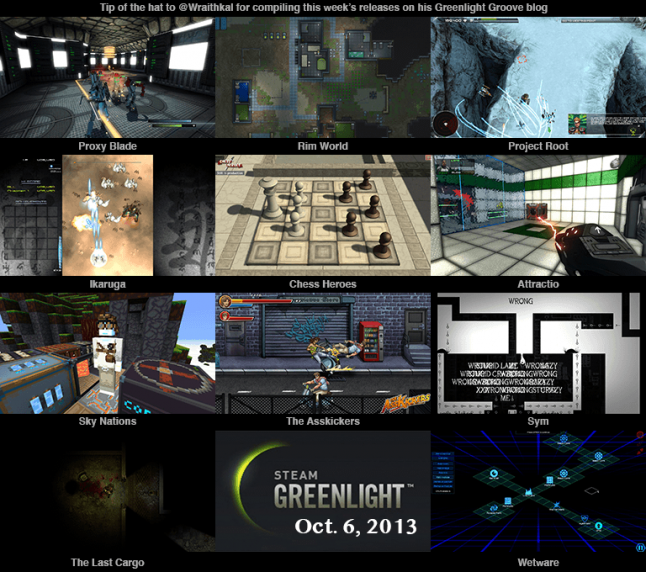 Of the 11 titles listed, two have been Greenlit. One is Ikaruga (a true classic) and the other is Rimworld, which can be summarized as "a sci-fi Dwarf Fortress with graphics." In other words, catnip for gamers.

Sky Nations has been delisted. As for the rest, let's look at the number of comments, as we have no other metric. Rimworld has 785 comments right now.

The two projects with crowdfunding campaigns have broken away from the pack, while I'm guessing the rest of the entries look something like mine. 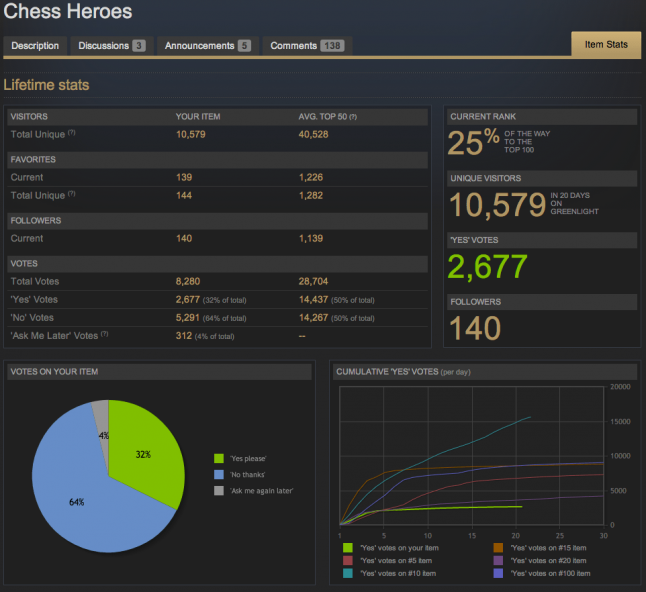 The eye is immediately drawn to the big numbers and bright colors of the Yes votes, quickly followed by the percentage of the way to the top 100. Those seem like nice, healthy numbers until you compare them to the Top 50, where I have 25% of their unique visitors and ten percent of their favorites and followers.

I wander over to the Cumulative 'Yes' Votes graph, which compares my item to that of the #5, #10, #15, etc. items. In the interest of competitive analysis and self-education, I'd love to know which projects those are, and see how they've handled their campaign. But there's no way to find out, precluding a chance of learning from others in a live environment. And the numbers don't even make sense: how does the #10 item have half the votes of the #100 item after the same length of time?

That is the most frustrating element of Greenlight. While I can arguably gauge my project versus others, the inability to dig down and try to understand how we differ is hard to take. And remember: the only reason I was able to check in on my "cohort" was because a blogger took the time to document it. You think it's frustrating as a voter navigating Greenlight? Try it as a developer whose livelihood is on the line.

Personally, the worst aspect -- the absolute worst -- is the ratio of "yes" to "no" votes. Only 33% of people say "yes," on average. The rest say "no." Has any game ever been Greenlit with that kind of ratio? Only a handful can say for sure. And the rest have no way to find out.

Early on, I assumed the lopsided ratio was due to the botched launch on Greenlight, but it's held steady, even after revising the intro and adding a video of people radiating happiness about the game.

This forces a question: is my core concept a non-starter? Or am I trying to appeal to the wrong audience?

Thankfully, showing the game at expos and conferences has given me the confidence to say the concept is strong enough to succeed. But that's not very helpful if the platform I'm aiming for has an audience with a different opinion. And so I've been thinking about the games that get Greenlit, and what the customers on Steam are looking for. These customers are "Core Gamers." Will they buy my game?

I learned an important lesson about appealing to the "core gamer" demographic from the team that worked on Prince of Persia, the cel-shaded remake with beautifully painted textures. The game was not a success, and they believed it was due to the art style. I expressed amazement: how could something that pretty turn people away?

They said teenage boys and young men grow up on games, movies, and shows with soft colors and pretty palettes. At a certain point age, they turn away from beauty and embrace gritty realism, the "grim darkness of eternal war." I believe the appeal of beauty (which Chess Heroes aspires to, albeit fitfully) returns after a while, but no data, or even anecdotes, back up my claim.

All I can do is look at the games that have been Greenlit in the past. The vast majority are action-packed or soaked in violence, hyper-saturated or starkly black-and-white. Chess Heroes is none of those, and in addition it is too easily disregarded as a lazy attempt to reinvent chess, something that only playing it can really dispel.

Have I stacked the deck against myself?

I may have seriously miscalculated in choosing to focus on the PC market first. A game without hard corners or an "edge" (except for the courage to say it is "a modern take on chess") is not likely to gain traction in the indie community that I was counting on. It's a mainstream product, and Steam is not a mainstream marketplace. In the age of indies that's a serious risk.

But in the end, Chess Heroes a quality product, and I believe quality goods will always, eventually, find their niche. Will it end up on Steam? I don't know the answer, but I believe that the Greenlight process will end up being a litmus test. If I can make my game work there, then success -- while not assured -- is likely to be in reach.

You can find Chess Heroes on Steam Greenlight by clicking here. Thanks, and please share!