Google's I/O dev conference kicked off today in Mountain View, and as part of its keynote presentation the company's VR czar took the stage to debut Daydream, a new mobile VR iniative for Android.
Alex Wawro
Blogger
May 18, 2016

Google's I/O developer conference kicked off today in Mountain View, and as part of its keynote presentation the company's VR czar Clay Bavor took the stage to debut Daydream, a new mobile VR iniative for Android.

What's interesting about Google's renewed VR push is that it's shipping the next version of Android, currently known as "Android N", this fall with a special "VR Mode" that's focused on low-latency VR performance.

"These improvements are part of the core of Android N," said Bavor. "What that means for developers is that there are going to be a lot of Daydream-ready phones."

As you might guess from that comment, Google plans to work with its partners to brand Android phones which meant specific technical requirements as being "Daydream-ready", and the first wave of those phones are expected to ship later this year.

For now, Google isn't manufacturing its own Daydream headset -- instead, it will release a "reference design" so that other hardware companies can make their own headsets that people can jack their "Daydream-ready" phones into.

That reference design will also feature specs for a Daydream motion controller, which looks a bit like an Apple TV remote and (based on a demo video shown by Bavor during his presentation) seems to function in much the same way, as it appears to include basic motion sensors.

"We've built an orientation sensor so it knows where it's pointing, and how it's turning," said Balor, noting that Google has been working with a handful of game developers (lineup embedded below) to create games for Daydream.

Interest in mobile VR headsets seems to be holding strong -- Samsung has sold over 300,000 Gear VR headsets in Europe this year alone, and Google has shipped over 5 million of its inaugural mobile VR headset, Google Cardboard, since launching it two years ago. 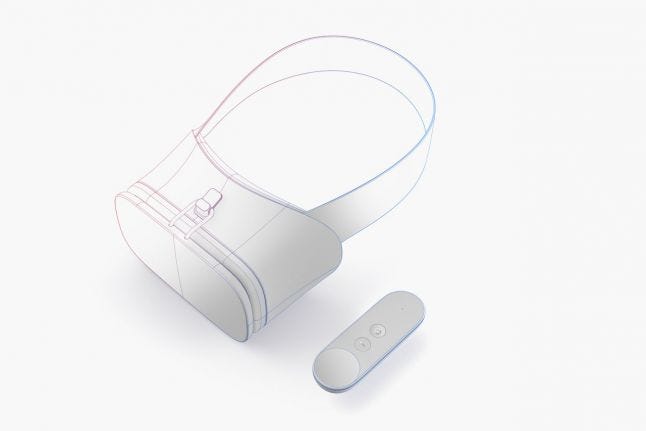