Getting Your Game Greenlit In 2014

Valve have opened up the floodgates by Greenlighting more games for Steam than ever before. So how hard is it to get your indie game on Steam right now?
Colm Larkin
Blogger
June 11, 2014

Making a game for PC or Mac? You'll probably want access to Steam's 75 million subscribers and their often joked-about spending problem. After all it turns out most people are buying games on Steam that they never even install! Now there's a market you want to tap into!

Steam's almost-monopoly causes some real problems, with gamers often refusing to buy games from you directly, saying "I'd buy it if it was on Steam". A couple of years ago it was basically impossible as an indie dev to get onto Steam. Even with the launch of Greenlight, their crowdsourced vetting service, it was extremely difficult as recently as last September. Fortunately in January Valve started ramping up the number of games they were Greenlighting and right now they are accepting a batch of 75 games every two weeks. Lets ignore for now what this rash of games is going to do for your game's release (hint: find an audience outside Steam) and instead address the question 'How hard is it to get through Greenlight in 2014?'.

Since last October I've been building a game called Guild of Dungeoneering which is a kind of reverse-roguelike with a pen-on-graph-paper aesthetic. On April 9th I submitted it to Steam Greenlight and it was Greenlit in the batch of May 14th some 35 days later. Oh and my first day as a fulltime indie dev was April 14th so I got to spend plenty of time refreshing that stats page (all day long, every day!). Here's what I learned.

Coming to Steam (and elsewhere!)

Submitting your game to Greenlight is dead easy. Just sign up for a new account for your business, throw GabeN your $100 (hilariously it counts as a game in your steam library, so you could even gift this to someone), lash up some screens & a video and BOOM your game can be unleashed on the salivating masses.

Quick aside: when is the right time in development to hit up Greenlight? As an indie dev you should be sharing your game embarrassingly early, but for Greenlight I think it's best to have things just a tiny bit more polished. Specifically I think you need a nice video trailer, some nice looking screenshots, and some gameplay (either in video or demo form). But you do not need to have a finished game! In fact you should be on there long before you have finished your game.

A rush of votes to the head

As soon as your game is live on Greenlight you will get a pile of views without you having to do anything at all. This is because it's added to everyone's Greenlight queue to vote on (a bit like a gamedev hotornot). This means for $100 you'll get several thousand interested gamers to look at your video (sometimes for several seconds!). If you think of it in pure advertising terms that's actually incredibly cheap & incredibly targeted. Nice! This will however disappear into a trickle of traffic after a few days or at most a week. 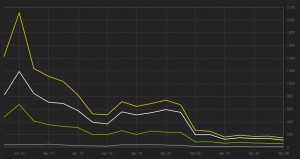 The important line is the green one for 'yes votes'

Aside: you can post announcements on your Greenlight item which are supposedly shown to people who pick 'ask me later'. Barely anyone uses this so don't use them to reach people like you might with Kickstarter updates: of 16,973 votes cast for Guild of Dungeoneering a tiny number of 629 people picked 'ask me later'. That said the announcements are prominent on your Greenlight page so throw in at least one to show you are alive for future visitors.

To get anywhere you are going to have to get your fanbase to vote on your game. Luckily you've been building up that fanbase from the beginning, right? I timed the start of our Greenlight campaign with the release of our lovely trailer, which I hoped would get picked up all over the internet in a sensation of traffic and cause the game to be greenlit in like one day. Ha! That would never happen. Oh wait it did happen exactly that way to the guys behind CRAWL!

You can't rely on that happening to you, so assume you'll have to do the legwork like I did. I built up a presslist of over 60 specific games writers who wrote about games like my one, and then mailed them customised one-to-one mails pitching my game, the trailer, and that it was now on Greenlight. This took a full day. I followed up with everyone who hadn't written something about three weeks later, gently offering a new build + the fact we were almost through Greenlight. I also wrote my first ever Press Release and handed it over to the lovely gamespress.com for release. Finally I was all over my usual forums & social networks asking friends and strangers to vote & share.

This got me quite a lot of press articles, though mostly from smaller sites, but does it lead to that precious resource of Yes Votes?

Basically no one votes on Greenlight (or in elections)

You work hard for traffic & attention to your game. Then you divert a lot of it to your Greenlight page to get some extra votes, and basically no one bothers to vote. There's a few reasons for this, but the main one is how people use Steam vs how they read about games news. Your Steam client logs in automatically for you on your games PC. However you read news on your mobile phone, on your laptop or your work PC, or even if you happen to be on your gaming PC you will see this link and it will open up in your browser. Oh wait, you aren't logged into Steam on your browser are you? Nope. Just in the Steam client itself. Will I try and login.. oh wait now I need to jump through some security hoops.. NOPE I'm out. By my estimate (backed up by what others saw) something like 0.1% of visits from outside the Steam client lead to votes.

Aside: you could try a steam:// link that opens up directly in the Steam client. However I would be worried about people who click it on one of the many places where they don't have steam installed, getting a weird prompt instead of the Greenlight page.

In fact I found it easier to sell $10 pre-orders of Guild of Dungeoneering than to get yes votes, at times. This one-paragraph mention on the BoingBoing tech blog led to over 80 people buying the game via my site in one day, but less than that went on to the prominently linked Greenlight page that day.

Still it all helps, as without the extra attention you could be on Greenlight forever.

Lots of people vote no, but that's OK

Don't be worried about this. The question they are answering is "Would you buy this game if it were available in Steam?". A no vote means they wouldn't buy it, not that they hate you and want you to fail. Even the best games don't get bought by everyone; there are genres of games I will never buy and ones I love for example. Here's our breakdown of votes showing 51% yes - compared to 39% yes for an average top-50 game. 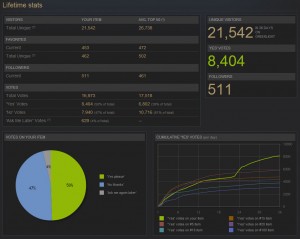 So how many Yes Votes do I need, anyway?

Valve uses more than just the number of yes votes you've accrued to select who they Greenlight, though exactly what criteria they use is a slight mystery, but getting into the Top 100 games on Greenlight certainly helps and should be your main goal. They even show you your 'percentage of the way to the Top 100' on your stats page. When I was running my campaign in April/May the line to make it into the top 100 was about 6,000 yes votes. Interestingly in January just before Valve started accepting so many more games it was about double that, so I expect that number will continue falling.

If you look at the graph above you'll see that after about 3 weeks my yes vote tally had tailed off to about 60/day at about 5,000 votes. At that rate I was looking at about another month before I would be in the Top 100 zone and likely to be greenlit. So I decided to take part in a giveaway via a large Steam group (Who's Gaming Now?!) giving away 100 copies of the game to their members who took part (and asking them nicely to vote, if they wanted to). This led to about 1.5-2K more votes over the following 10 days, bumping me right up in the rankings (briefly sitting at the #5 spot at one point), before the game got accepted by Valve. 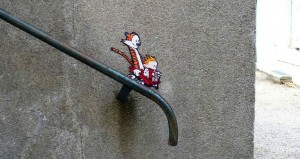 Best of luck with your own game & getting onto Steam. You can do it! Got any questions about the process? Drop me a mail ([email protected]) or leave a comment and I'll see if I can help. Also check out this AMA I did on Reddit which has a lot of info from me (and other devs) about the process.

This article was reposted from my regular gamedev blog.