Getting to know the business of Dota 2's indie Announcer Packs

We talk to Supergiant, Galactic Cafe and Hidden Path about what it takes to make a Dota 2 announcer, and how successful it's been.
Phill Cameron
Blogger
February 25, 2015

As of January 2015, Dota 2 has well over 10 million active users. And, as of January 2015, Steam Content Creators have made $57 million from sales in Team Fortress 2, Counter Strike: GO, and Dota 2. With the latter being by far the most popular of those three, it’s fairly safe to say the majority of that money has been made by selling items in the Dota 2 store.

Among those many different hats, swords and cosmetics sit the Dota 2 Announcer Packs, add-ons that replace the default announcer audio with a new voice, typically borrowed from another game universe. They're an oddity among the other items in the store as they have the freedom to break from Dota 2’s strict art style and setting, something that Valve itself has happily done by inserting GLadOS from Portal and Doctor Kleiner from Half Life. The idea being that only the player is going to be hearing the barks and calls of an announcer, so it doesn’t become incongruous from the style of the game.

Of far more interest though are the announcers that don’t come from Valve. Supergiant’s Bastion narrator was the first non-Valve announcer in the store, quickly followed by Hidden Path’s Defense Grid, Frozenbyte’s Trine and most recently Galactic Café’s Stanley Parable. In addition, a few weeks from now Behemoth’s Battleblock Theatre is going to grace the store with their own announcer. An announcer for Redhook's Darkest Dungeon is also in the works. 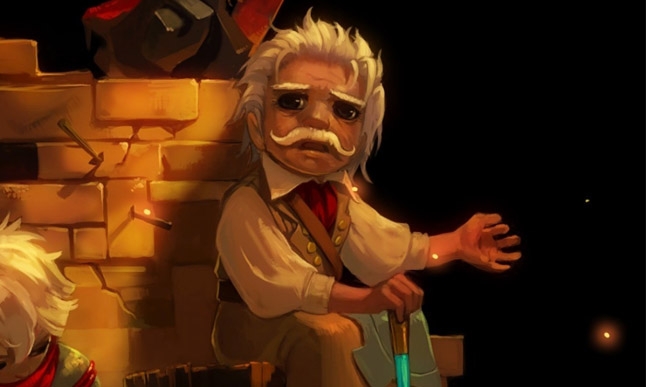 Selling for just under $10, with 25 percent going straight back to the developers, gaining an immediate audience of over 10 million players is nothing to sniff at. However the question that comes to mind is whether, by creating an announcer pack and having it accepted into the Dota 2 store, you’re merely doubling down on your existing audience and selling to those who both enjoy your game and Dota 2, or opening it up to the entire player base of Valve’s wildly successful game, and maybe bagging a few new customers in the process.

“The Bastion announcer pack for Dota 2 crossed over half a million dollars in revenue about a year ago, of which we take the standard cut,” Greg Kasavin is the Creative Director at Supergiant Games, and their announcer pack went live on January 1, 2012. “For sure, some players learned of Bastion for the first time from the announcer pack, since Dota 2’s audience is much bigger than Bastion’s.”

It’s no huge surprise that the Bastion announcer pack was successful, as it had the benefit of being both the first non-Valve announcer in the store, as well as coming off the back of an extremely successful game. That’s not to diminish the high quality of the pack itself though, which adds a welcome level of calm and understatement to a game that is prone to bringing out the anger and frustration in people when things don’t go so well. “We ended up writing over 700 lines for the announcer pack, so on a percentage basis it’s like one fifth of Bastion’s entire script.” Kasavin continues. “[It] turned out to be a sizeable project for us and took a number of weeks in total for the writing, editing, and recording of all the content, and that’s not factoring all the work Valve did to support a bunch of special-case content (for example, our narrator will greet the player in different ways depending on what time of day they’re playing Dota 2).”

"It is an example of our efforts and we took this task seriously."

As with all things, then, the question of whether to embark on the endeavour of creating an announcer pack for Dota 2 comes down to time and cost against potential profit. Hidden Path Entertainment CEO Jeff Pobst, whose studio brought its narrator from Defense Grid to Dota 2, provided an interesting counterpoint to Bastion’s wild success.

“It was an investment that cost us around $10,000 up-front to do and took a few folks away from other tasks.” Pobst explains. “But we made approximately $15,000 on the product over the last two years.” A modest profit then, but a profit nonetheless. “I do think it helped expose Defense Grid a bit, but it’s hard to know how much – our guess is that it is more of a brand awareness type of marketing and a cool thing for us to be able to cross over into Dota 2 as well. Maybe players think 'oh that’s the guy from that tower defense game my friends talk about.' We expect that’s more likely than people hearing it while playing Dota 2 and deciding they’ll immediately go out and buy Defense Grid or Defense Grid 2.”

“But if people like what they hear: his tone, his humor, his way of talking about what’s going on, maybe that helps them go ahead and purchase the game if they’re on the fence and looking for confirmation that we care about high quality production values in our work. It is an example of our efforts and we took this task seriously.” 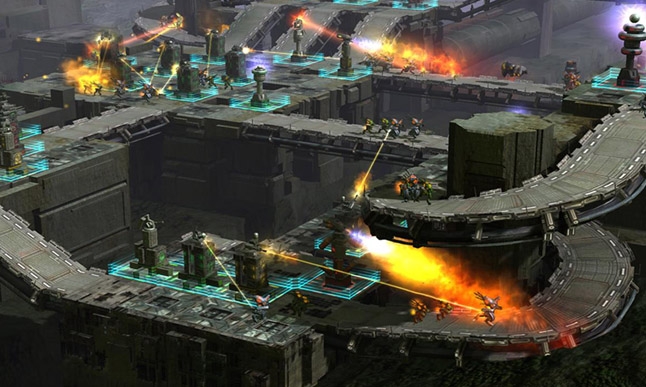 In comparison, the story from Davey Wreden, writer and creator of The Stanley Parable, is a little harder to pin down. “I’m not sure I have any good concrete information on this, I don’t actually have the number of sales of the pack. We launched it about the same time as the Steam Summer Sale so the sales numbers are not particularly useful.” Similarly, in terms of cost, Wreden has this to say: “There’s no way to gauge the expense of the project, since it was just me, William and Kevan (the Narrator), putting in our free time for a few months.”

Regardless, the message from all three of the people I talked to was positive, not merely in terms of financial success of the announcer packs, but also in creative terms, too. The Bastion announcer was 700 lines of speech, The Stanley Parable 600 (although admittedly a lot of those lines were much longer than average), and Defense Grid's as 525. The primary difference in terms of cost between Defense Grid and the other two is that Hidden Path had to pay for recording studio time with their voice actor, whereas both Bastion and The Stanley Parable had their voice actors in-house, as a part of the development team, making their time much more economically efficient.

What is also similar across all three of these projects is their reasons for creating their announcers. For both The Stanley Parable and Defense Grid, there was fan demand for the announcer pack, which spurred the respective developers to investigate the possibility. With Bastion things were a little different: “[Valve] more or less mentioned to us that if we were interested in doing an announcer pack, we could go crazy.” Kasavin explains.  Still, all three were the result of outside demand.

"When we took that emotional core from the original game and placed it in the Dota environment, the two things fit together, they complemented one another."

However with the Dota 2 audience growing constantly and rapidly, there are more and more potential customers out there. So when it comes to asking yourself the question of whether you should consider creating an announcer pack, there are a few things to chew on.

Before you even begin, you need to establish whether you have a character in your game who would make a good fit for a Dota 2 announcer. “Even though it was something fans were asking us for, we did not commit to this announcer pack until we were sure that the Narrator would occupy a meaningful space inside of Dota.” Davey Wreden has a lot of thoughts about this concept in particular.

"'Meaningful' to us meant that he would be true to the spirit of the game and that he would offer something unique and stylish and entertaining, something unlike all the other announcer packs. If either of these two criteria had not been met we wouldn’t have done it. When we took that emotional core from the original game and placed it in the Dota environment, the two things fit together, they complemented one another.” 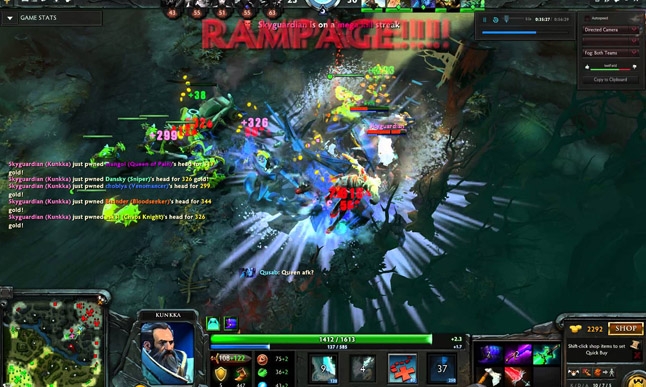 “What I’m saying is that when it fits, it fits. I had heaps of fun working on this, but the thing wrote itself, I was incidental. That’s the environment that I would work on another announcer pack in, where the character is so strongly recognized that he/she/it writes itself into the role, and I’m just there to usher it along. Otherwise it’s like pushing a square peg into a Dota hole. I think that your character needs to already be a living, breathing, nose-bleeding entity that stands on its own with confidence before it can be shepherded into the Dota framework, because otherwise it will fight you and resist you and your players will notice. But maybe that would make for a super interesting Dota announcer! I guess it’s on you to figure that out.”

"It's important that you treat your brand with the same respect you want players to treat it with, and decide on whether or not the match with Dota 2 is a good fit or not."

A great example of this is the newly released Darkest Dungeon, which has seen demand from both the players it shares with Dota 2 and the developers themselves. The pervasive and acerbic narrator in Darkest Dungeon constantly berates and offers cynical encouragement as you delve deeper into its dungeons, which makes it a natural fit for the difficulty and complexity of Dota 2's matches. Redhook games recently confirmed to Gamasutra that they're going ahead with creating a Dota 2 announcer pack, and they're in dialog with Valve.

There’s also no guarantee that Valve will accept your announcer pack at all. While this sounds like a fairly big caveat to the whole process, as Pobst puts it: “If you can make a sample inexpensively, definitely do that first and put it up there to see how the community reacts before investing more money in the project.” This wasn’t an option for them, as they could only book their voice actor for four-hour slots, so it was as expensive to record the whole thing as a quick sample, but a few sample lines are an option for you that’s definitely the way to go. “If the audience doesn’t really want it and Valve doesn’t bring it over to the store, then you’re not out of a lot of money that way.” Not to mention it will give you a better idea of exactly why it didn’t work in the way you wanted it to.

More importantly, “If you do decide to make the announcer pack, treat it seriously, it’s an example of your work. Make a great pack that is good for the Dota 2 game experience and represents your game well. It’s important that you treat your brand with the same respect you want players to treat it with, and decide on whether or not the match with Dota 2 is a good fit or not.”

Making a Dota 2 announcer pack is never going to be an option for every single game out there, because there’s a fairly small spectrum of what kind of character makes for a good fit as a disembodied voice talking about towers falling and fantasy heroes slaughtering one another. But for those that do meet that criteria, there’s an incredibly large and mostly untapped market available to you. In a lot of ways an announcer can come to define a player’s experience, as Dota 2 is a game that isn’t just dabbled in; people pump hundreds and thousands of hours into it, and finding an announcer that creates the kind of mood that you want your experience to be defined by is something that’s going to stick with you for a long time.