The popular Steam service from Valve Software, now in its second decade, has been undergoing growth at a rate of 25 percent every year. It has already surpassed the size of Xbox Live and will likely surpass Sony's service population by 2016.
Matt Matthews
Blogger
December 31, 2013

Ten months after the launch of Microsoft's Xbox Live, Valve Software launched its unified online service, Steam. Over a decade later, Microsoft's service has over 48 million accounts while Steam surpassed 65 million a few months ago. Sony's network -- under the name PlayStation Network (PSN) or Sony Entertainment Network (SEN) -- now has 110 million accounts, far more than Steam. However, that figure includes web-only accounts and accounts for services like Music Unlimited which need not be related to video games at all.

So while Valve's customer base would seem to sit between Microsoft and Sony in size, it is far more likely that Steam is actually closer to the leader.

However, the growth of Valve's network over the past seven years suggests that it will exceed the size of Sony's service within the next three years. To get an idea of just how quickly Steam has been accumulating new accounts, I've put together the following diagram showing the total number of active accounts (in blue) and the peak concurrent connected accounts (in red). 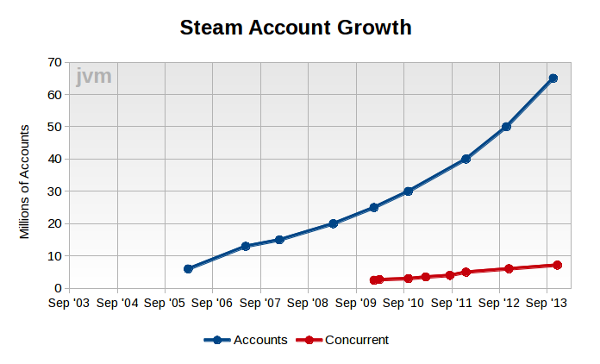 From the data that Valve has reported about its business, the peak concurrently connected account figure is usually 10-15 percent of the total number of active accounts.

What is particularly interesting to me, from a mathematical point of view, is that the data from 2007 through today, is almost exactly exponential, with a continuous annual growth rate of 25 percent. That works out to doubling in size every 36 months.

To see what I'm talking about, just look at this exponential curve fit to the data above, with the pre-2007 data point excluded. 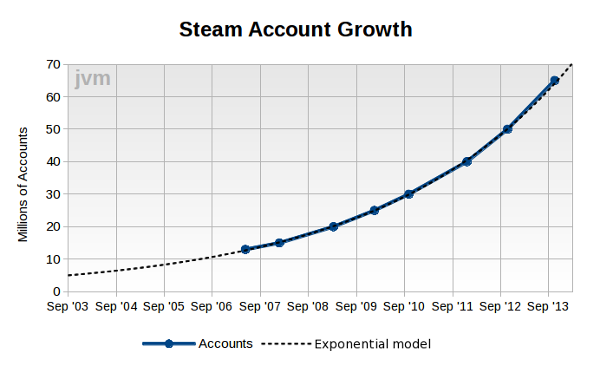 If that rate of growth continues, Steam will have exceeded 130 million accounts on its system by the end of 2016, putting it ahead of Sony's consolidated service population, in my estimation.

What's particularly interesting is what will happen once the Steam Machines begin shipping in 2014. If these systems see strong uptake, then Valve could see the growth curve bend up even further, but that will take time. Given the number of accounts already installed on personal computers, the number of Steam Machines sold to new consumers would have to be several millions per year.

Of course, Valve's interest is surely in making money but has historically held revenue and profit data secret. As a bare minimum, if we imagine that each active account spends a single dollar per year, then the company would have earned over $200 million in the past seven years. Again, that's just a bare minimum.

But we can easily see that the revenues are well beyond that meager figure. The company has declined to report revenue, but it has reported annual software unit sales growth rates for several years. For example, it showed over 100 percent growth in unit sales for each year from 2005 to 2011, with over 200 percent reported for 2009 and 2010.

Let's assume that the six million Steam accounts in 2006 averaged sales of 2 software units each. Then using the sales rates reported by Valve, Steam software sales would have reached over 800 million units per year by the end of 2011. That's an annual rate, not a cumulative number.

How big is 800 million units of software in 2011? Well, for a sense of scale, all the software sold at retail in the U.S. for consoles and handhelds in 2011 was around 230 million units.

That 800 million figure is so big that it makes me a bit uncomfortable, since it works out to 16 units of software per active account. However, my assumption of two units per account in 2006 seems perfectly reasonable to me, and the growth rates are directly from Valve's own press releases and comments to the press.

I asked Joost van Dreunen, CEO and co-founder of SuperData Research, how to make sense of these huge figures, and he suggested that "there's likely a definitional discrepancy" between what Valve counts as a unit and what I think of as a software unit. Rather than a full game, "a single, virtual item (e.g. a hat in Team Fortress 2) might also be considered a software unit".

That explanation makes sense to me, and it highlights one of the key differences between traditional retail tracking and modern hybrid markets that straddle the boundary between physical and virtual goods. A unit of software twenty years ago was a physical thing -- today it can be the same kind of data that was stored on a physical medium, but also smaller pieces that can modify the experience like hats or levels or entire episodes.

And that means that the revenue per unit is probably lower than the cost of an actual game, even on discount on Steam. Rather, the unit average will be brought lower by the cost of smaller virtual items. If we assume a rather modest $1 per item in 2011, then the service made close to $1 billion that year.

Remember, those are just estimates, back-of-the-envelope guesses to get a sense of the scale behind Steam. Until Valve actually reports something more precise, it's probably all we're going to have.

(There are companies, like SuperData Research, which do the really hard work behind making solid estimates of these kinds of things. But as far as I can tell, everyone is estimating -- there are no third-party trackers who can do for digital what groups like GfK and the NPD Group have done for traditional retail.)

Which brings me back to one of my persistent refrains: we need far more transparency when it comes to digital sales figures.

At least Valve has the excuse that it's a private company. Nintendo, at the very least, is reporting digital revenue every quarter -- something that Microsoft and Sony have yet to do for their services.