In a presentation to investors today GameStop execs sounded very excited about Nintendo's Switch, which they report has outsold the Wii in its first two months on sale in U.S. GameStop stores.
Alex Wawro
Blogger
May 25, 2017

GameStop's latest earnings report shows that while profits were down for the global retailer, sales were up -- thanks in large part to Nintendo's Switch, which GameStop reports it sold 1.2 million of in the U.S. during the console's first two months on sale.

That figure is important because it's just a smidge higher than the 1.1 million Wiis GameStop says it sold in the U.S. during that console's first two months on sale in 2006.

That lends credence to Nintendo president Kimishima's prediction a few months ago that the Switch would sell as well as the Wii, and GameStop's executive team seems excited about the prospect of having another Wii on their hands.

"We are all veterans of the Wii launch. The fact that this is ahead of the Wii launch is significant," GameStop CFO Rob Lloyd said during a conference call with investors today. Later in the call he suggested sales numbers might have been higher i the company hadn't had trouble securing Switch units, due to it being a "heavily allocated" product, adding that "there is a contest among all the retailers, online and in store, with our good friends at Nintendo."

"Literally we have the product sold before they hit our warehouse. But we haven’t seen supply even come close to catching demand at this point,” added company chief Tony Bartel, who said he believed the Switch's popularity would drive both game trade-ins and game sales at GameStop stores.

"The form factor of the games lends itself very well to a trade-in model. So we anticipate there will be a high percentage of trades for these games," said Bartel. "I’d say the Switch, just like the Wii did, is driving a lot of new innovation. So in the next year I think you’ll see growth in new games."

And in case you were curious, Bartel says a lot of GameStop customers are trading in old game hardware towards the purchase of a new Switch -- and a good chunk of those trade-ins are Wii U consoles.

"A lot of it, the majority of it, is next-gen hardware," said Bartel, referring to console trade-ins towards Switch purchases. "We have obviously a lot of Wii Us coming in, and thats predominantly the console traded towards it." 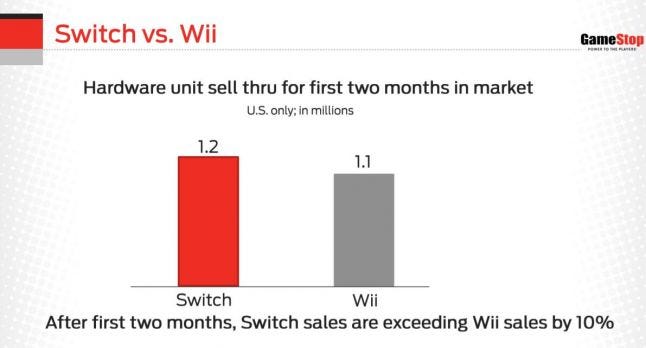