Microsoft's earnings report for the 2018 holidays show that while Xbox console sales were down year-over-year, the company's games business appears to be flourishing.Â
Alex Wawro
Blogger
January 30, 2019

Today's the day Microsoft publicized how much it earned over the 2018 holiday quarter, and while Xbox console sales were down year-over-year, the company's games business appears to be flourishing.

Notably, Microsoft says that during the three months ending December 31st its games-related revenue hit $4.3 billion, 8 percent higher than it was in the same period a year prior.

That encompasses sales of Xbox consoles, Xbox Live services, first-party games and third-party game royalties, and Microsoft says the increase was driven primarily by a 31 percent year-over-year rise in revenues from Xbox software and services.

Meanwhile, Xbox hardware sales actually declined year-over-year by 19 percent, which Microsoft chalks up to the launch of its more powerful Xbox One X console during this same quarter last year. Also, the company claims it saw 64 million active Xbox Live users in the month of December, which is about 5 million more than it reported during December of 2017.

Microsoft's overall revenues and profits each rose more than 10 percent year-over-year, something the company attributes to the strong performance of its cloud tech businesses. 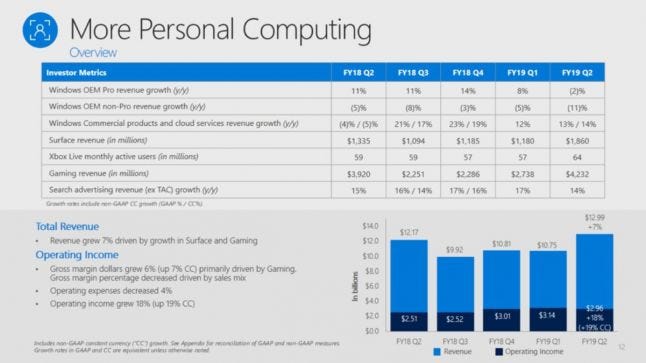