Games and Crowdfunding in 2018

A look at 2018 numbers for crowdfunding and video games.
Thomas Bidaux
Blogger
January 15, 2019

Welcome to my yearly blog post on crowdfunding and games, looking at how well games have performed on Kickstarter (and Fig) for the past year.

As usual, I have shared a lot of graphs here to go through, alongside my own comments in regards to the trends that can be observed. 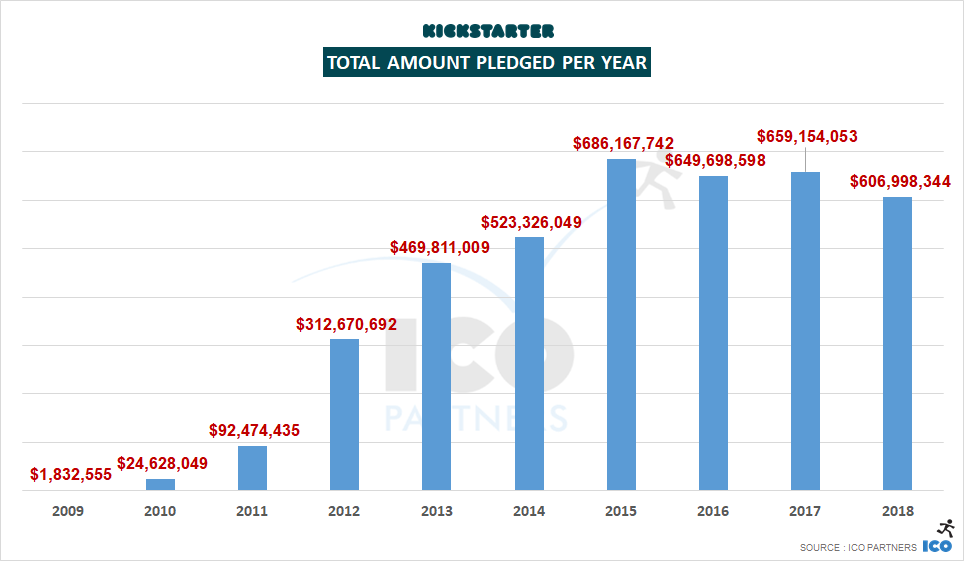 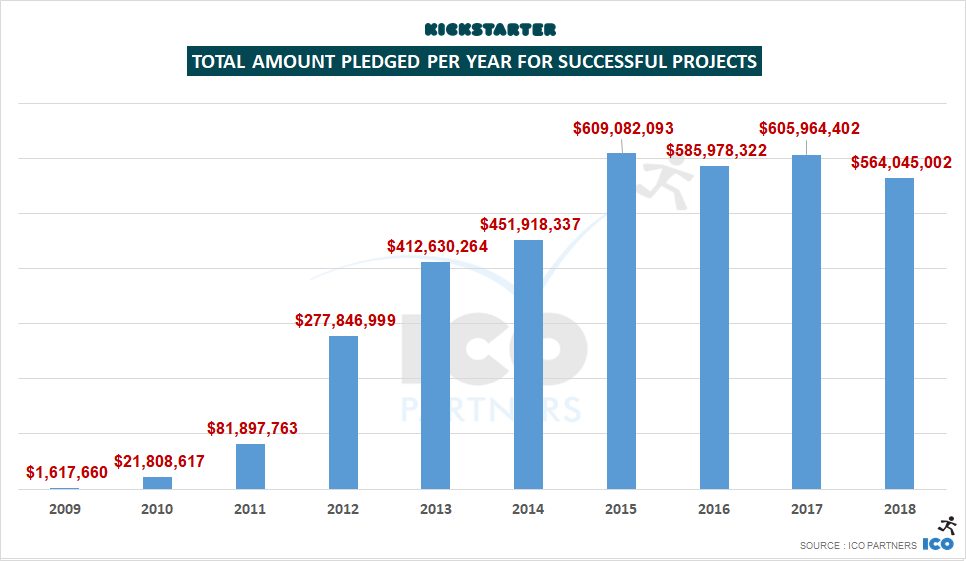 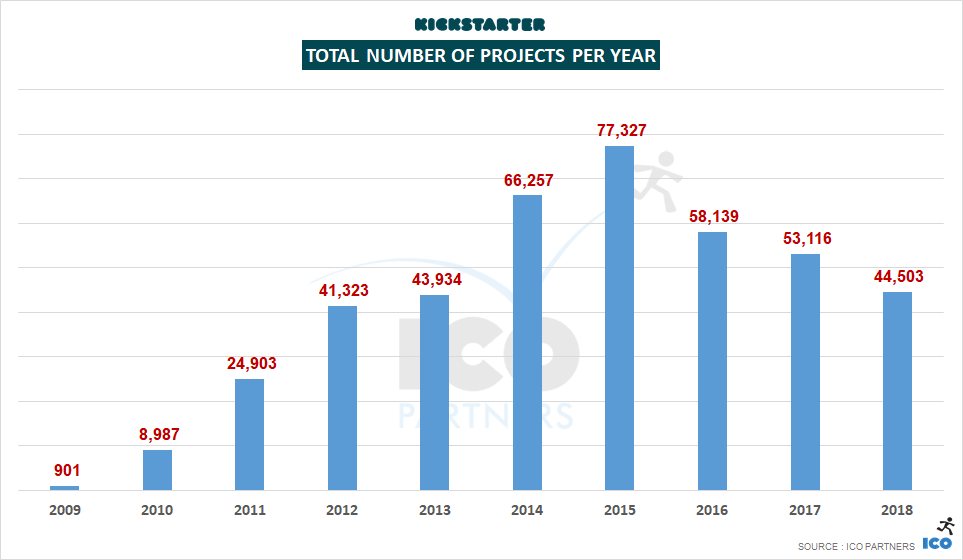 Kickstarter is still raising more than half a billion dollars a year, but it is to be noted that in 2018, it raised the lowest amount of money since 2014. This is only a -6% change year-on-year, and not a lot lower than in 2015, the best year for Kickstarter, but still a drop.

Much more significant is the total number of projects launched on Kickstarter, a -17% change from 2017, and more than -40% from 2015, the best year. The novelty of Kickstarter has worn off, and the dream chasers are probably less naive about their chances with crowdfunding. Not necessarily a bad thing, as the next graph shows: 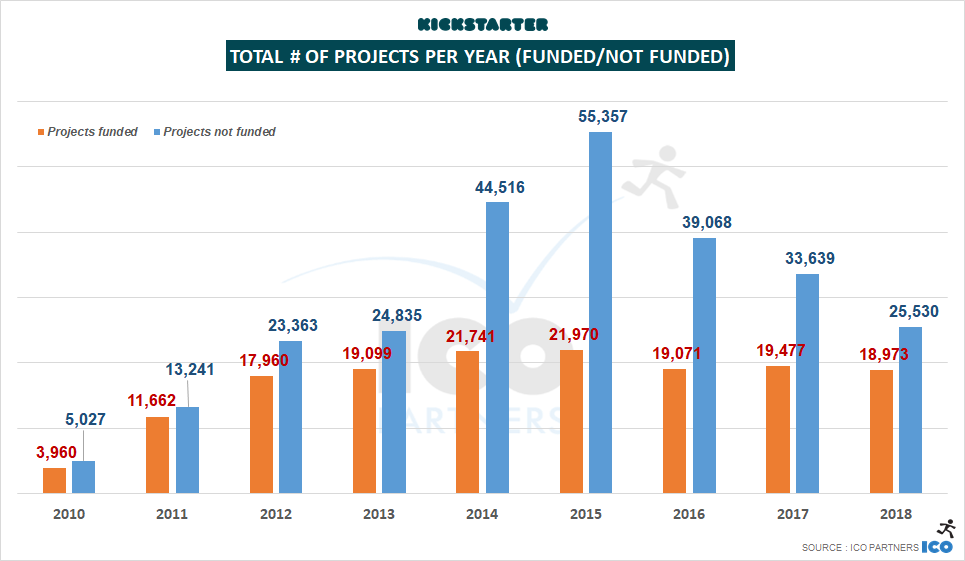 While the total number of projects has dropped by 17%, the number of funded projects only saw a -3% change. This could show the projects of a certain quality are not necessarily struggling more than before when trying their hand at crowdfunding.

If we see such a drop in the number of submitted projects, but a certain stability in the total number of projects funded, this would certainly indicate the platform is reaching a certain maturity, finding its place for projects suitable for crowdfunding. 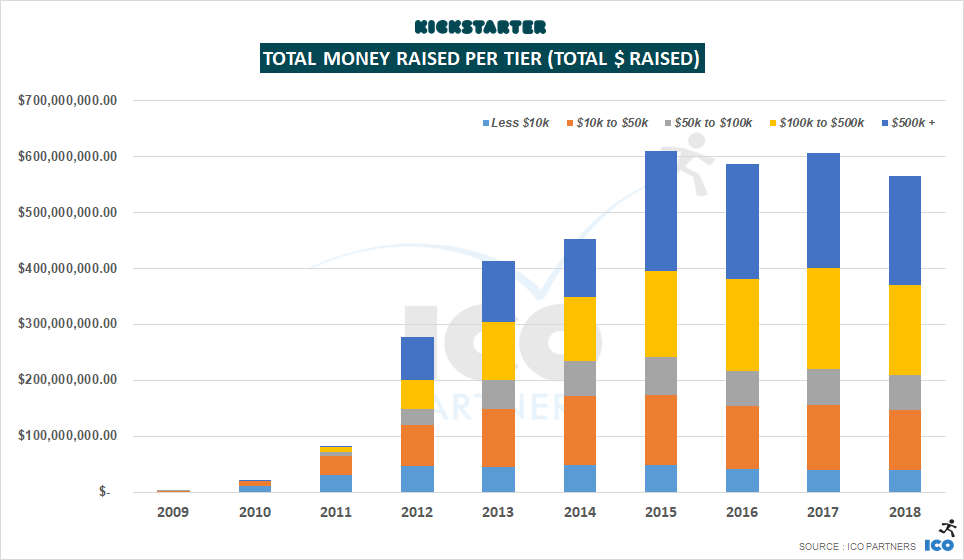 Looking into the money raised per tier, the drop is about even across all of them, with the exception of the projects below $10k, which raised the same amount as in 2017; and with projects in the  $100k to $500k range which saw a -10% change, compared to the -6% observed in the other ranges.

Categories at a glance – Biggest drop in the Technology category 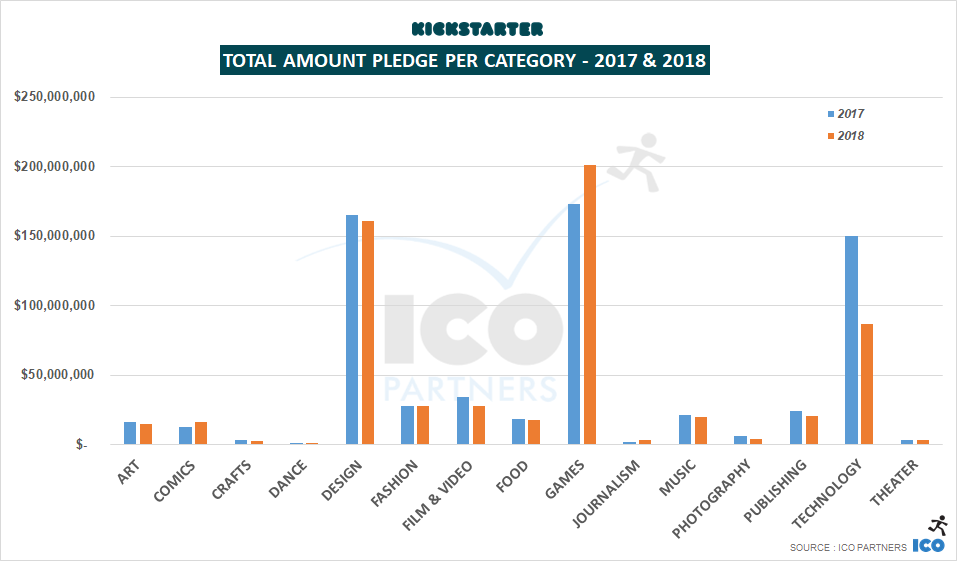 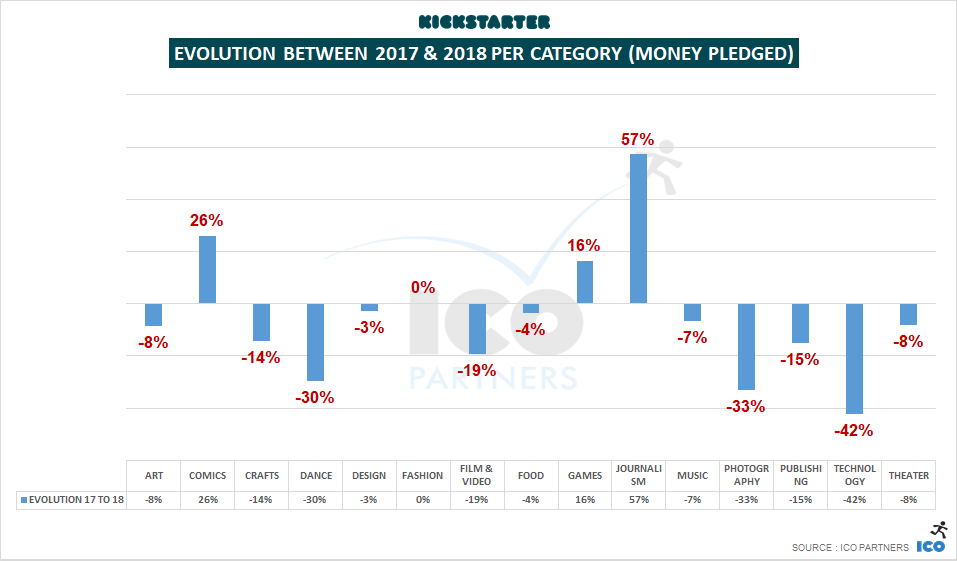 At a glance, the technology category saw the most significant drop in its numbers, and by itself carries most of the year-on-year drop in the money raised on the platform. The technology category is not the purpose of this blog post – but a quick look shows fewer funded projects (-26%), and less money raised across all the projects tiers of funding.

While there was a drop across all technology subcategories, the Wearable projects alone saw a -$16m drop year-on-year on Kickstarter. 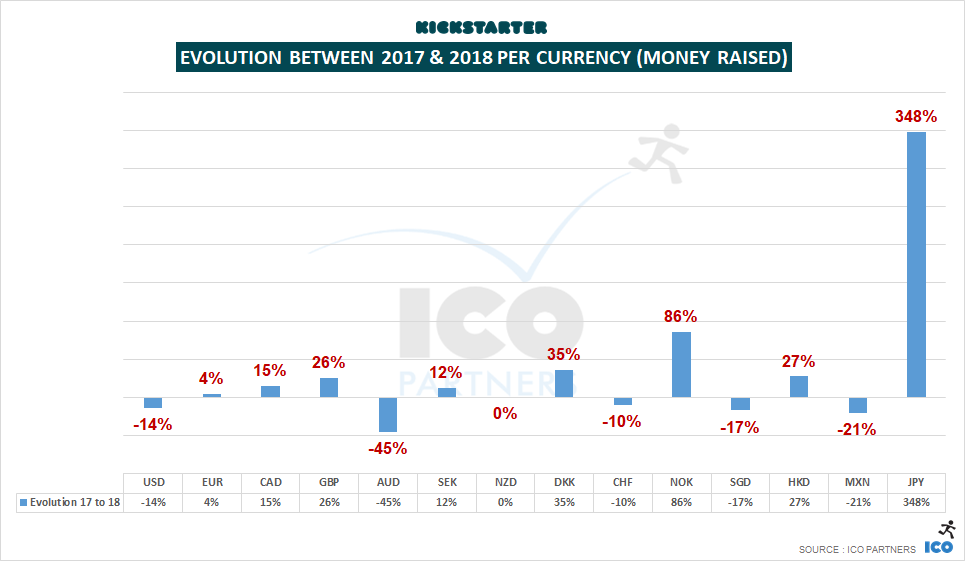 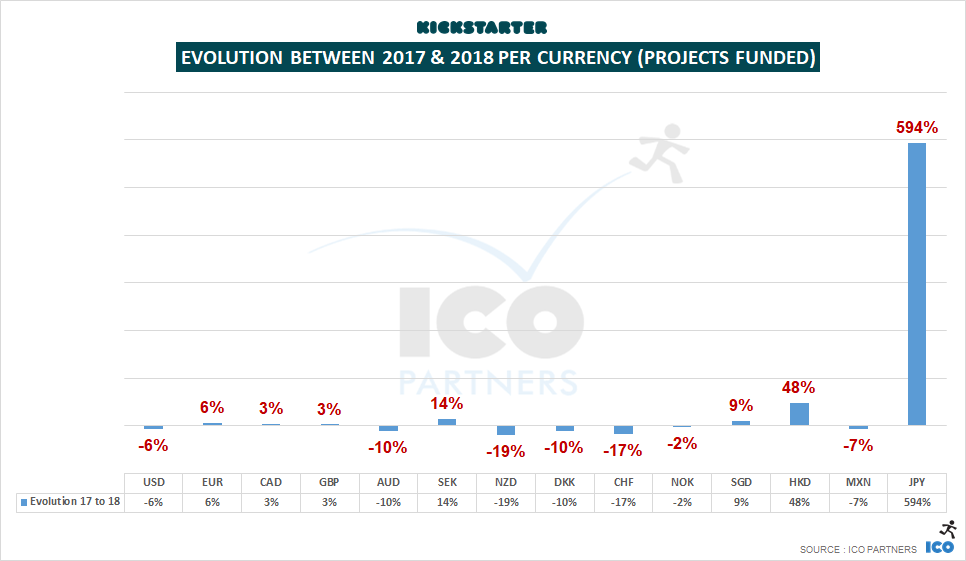 Looking at the year-on-year variation by currency shows a few interesting trends. Ignoring the over-performance of the Yen that was only available by the end of 2017, the drop in both the amount of money raised and number of funded projects for campaigns ran in USD is interesting, especially as Kickstarter is seen as a very US-centric platform.

The growth for projects in EUR, GBP and CAD is also a strong sign that the notion that you need to run your campaign in USD to succeed is probably misguided. 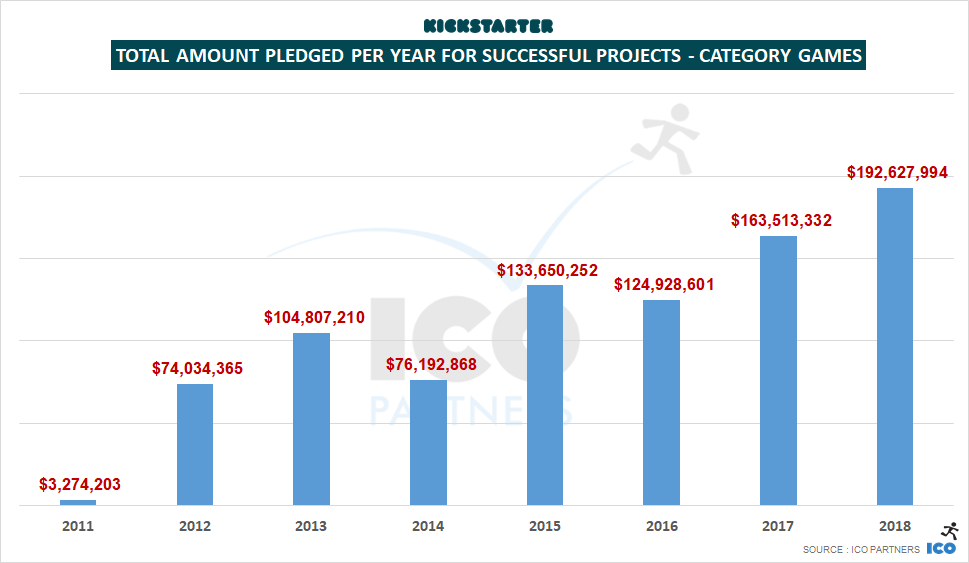 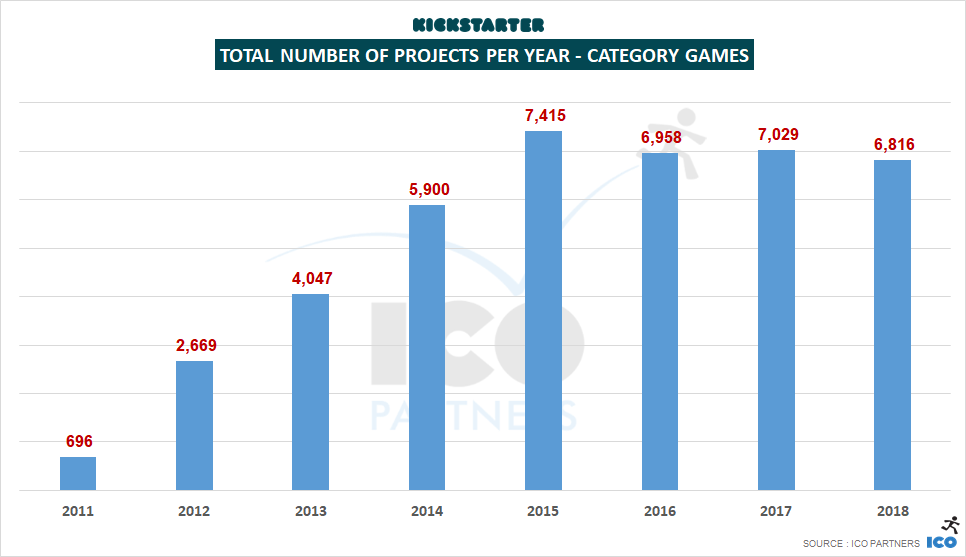 With $192m raised by successful projects on Kickstarter in 2018, the Games category is going very strong. It now represents more than a third of the money raised that year on the platform, with a steady financial growth.

Alongside the trend observed across the whole of Kickstarter though, there were fewer projects launching. 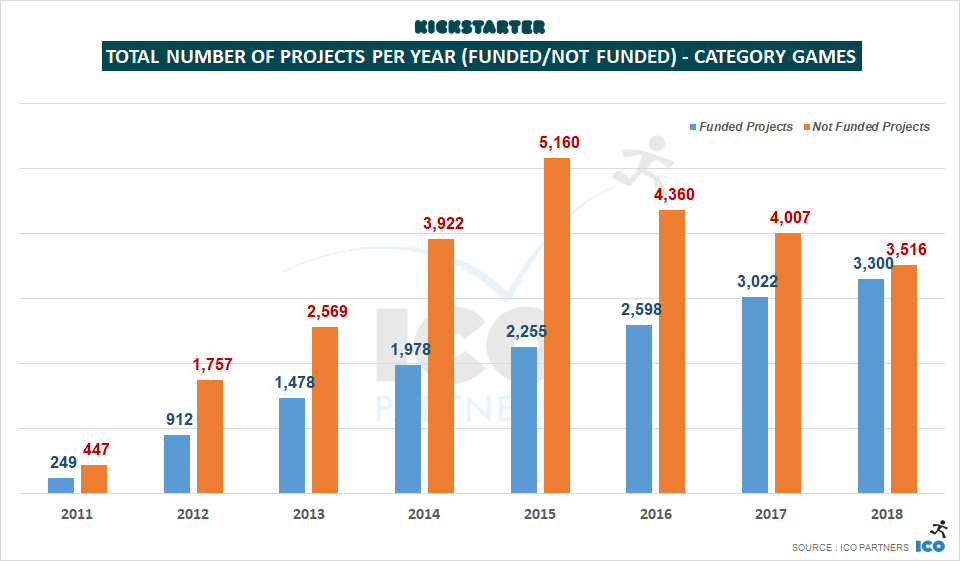 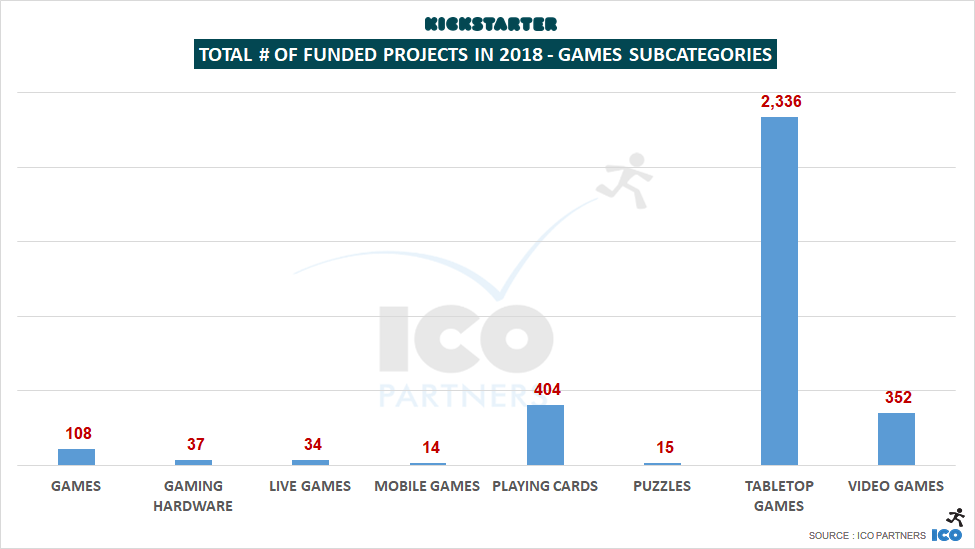 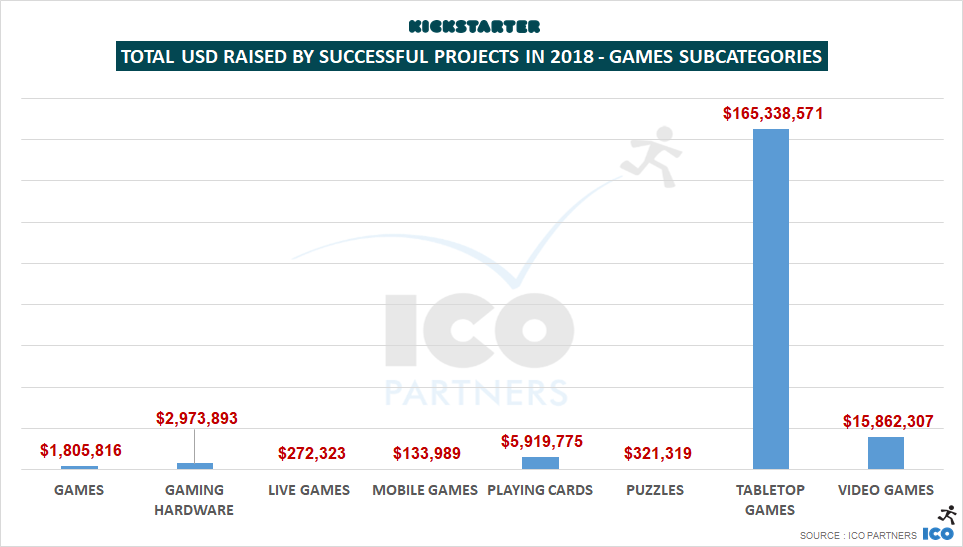 Following the trends from the last few years, most of the Games category numbers are driven by the Tabletop Games projects, with Video Games representing about 1/10th of the money raised by them. 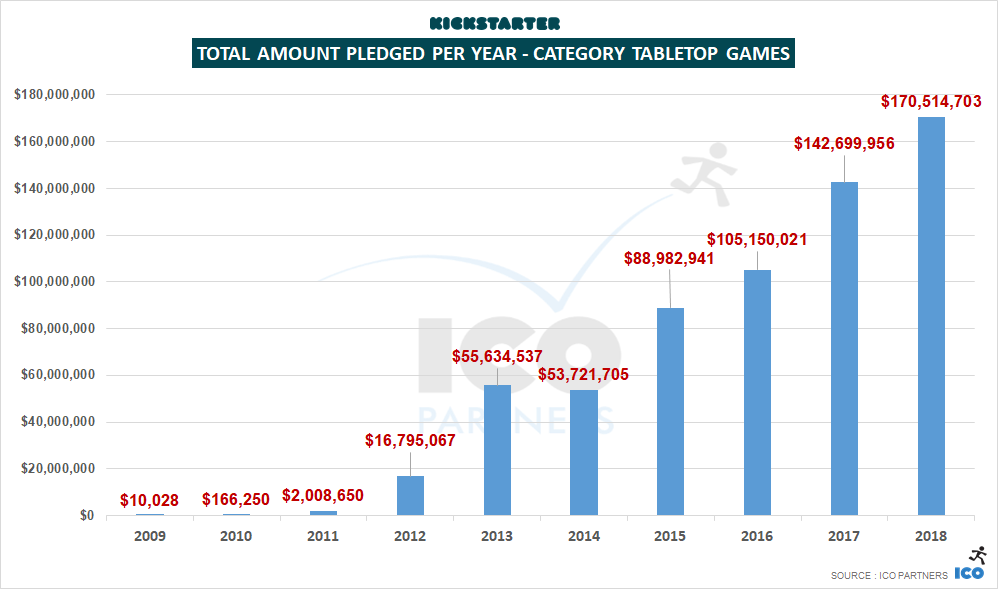 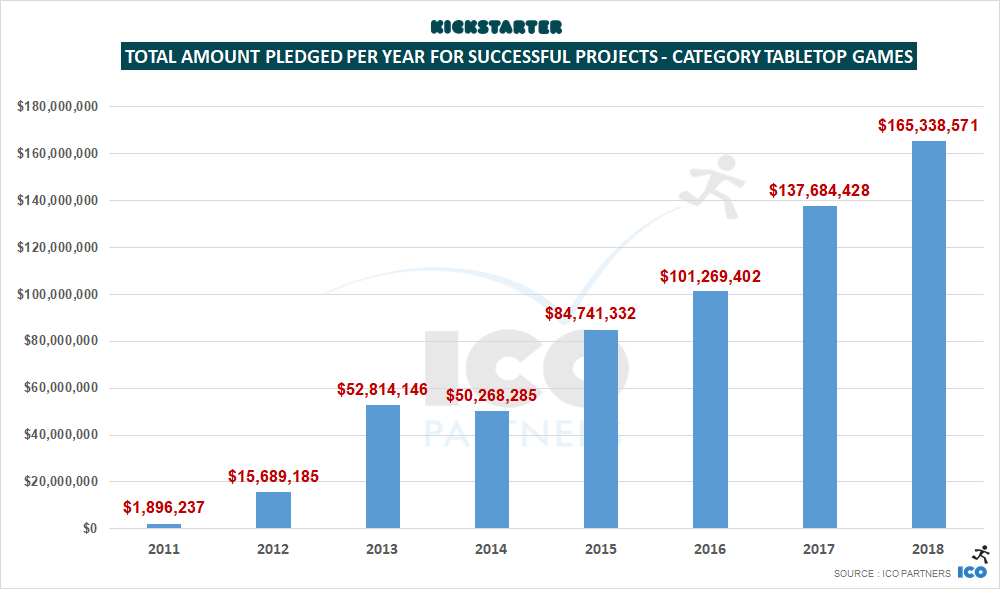 The very steady and significant growth of the funding gathered by Tabletop Games is not showing any signs of slowing down.

+20% money raised in 2018 is nothing to scoff at, with a total of $165m raised. The tabletop games industry seems to have found its pace with crowdfunding. 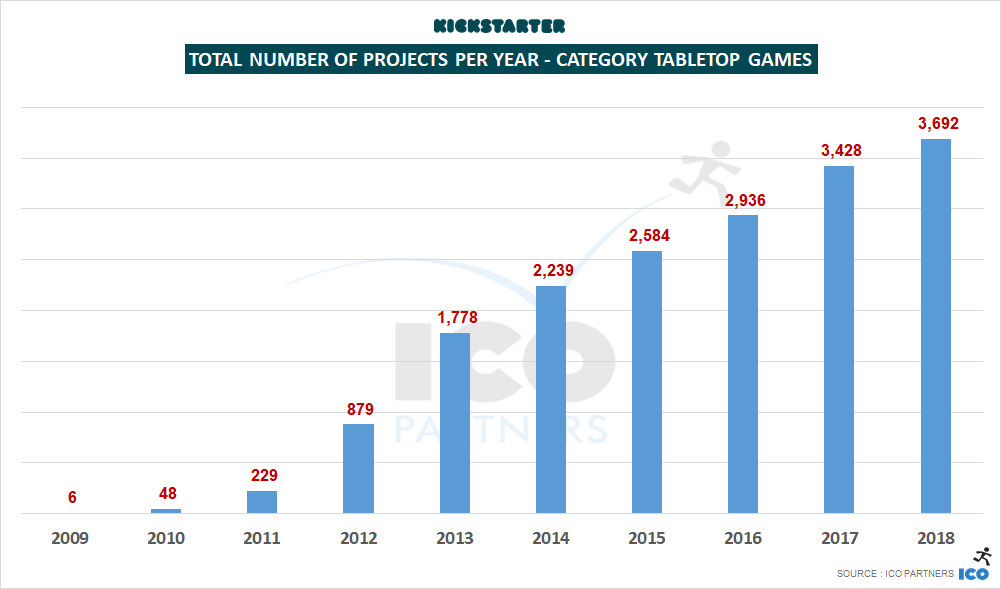 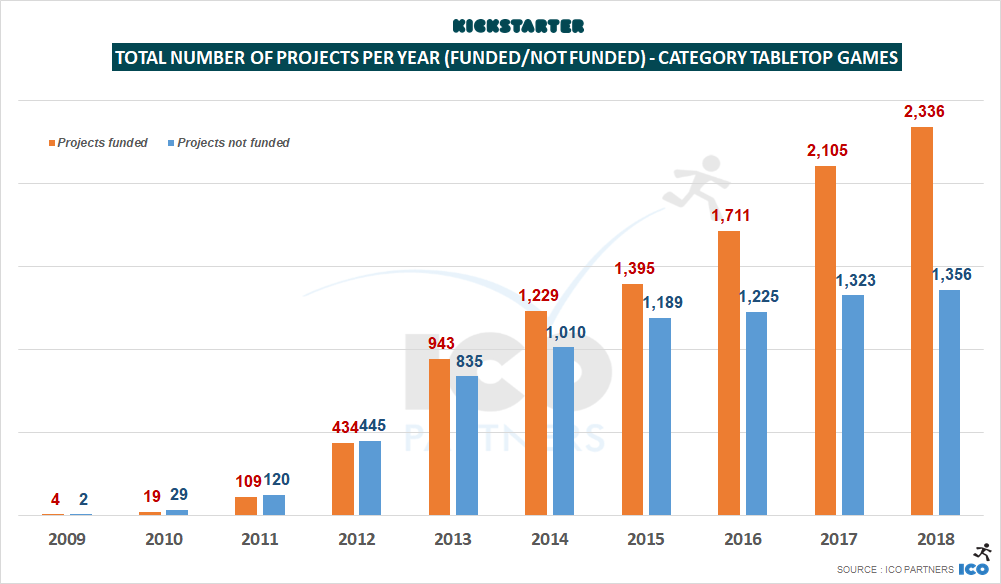 It is interesting to notice this goes against the trends for other types of project on Kickstarter, where the number of projects submitted is going down. 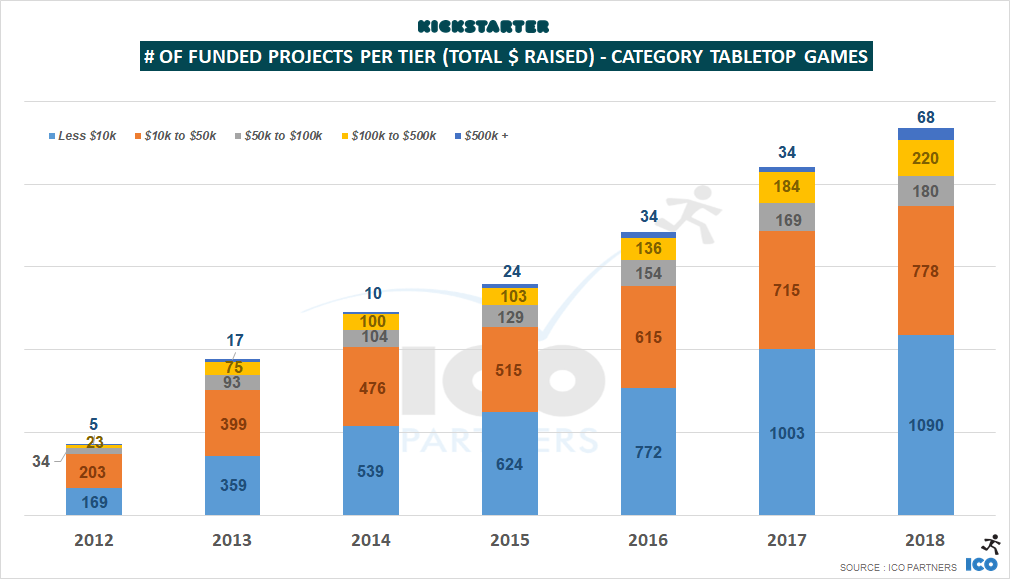 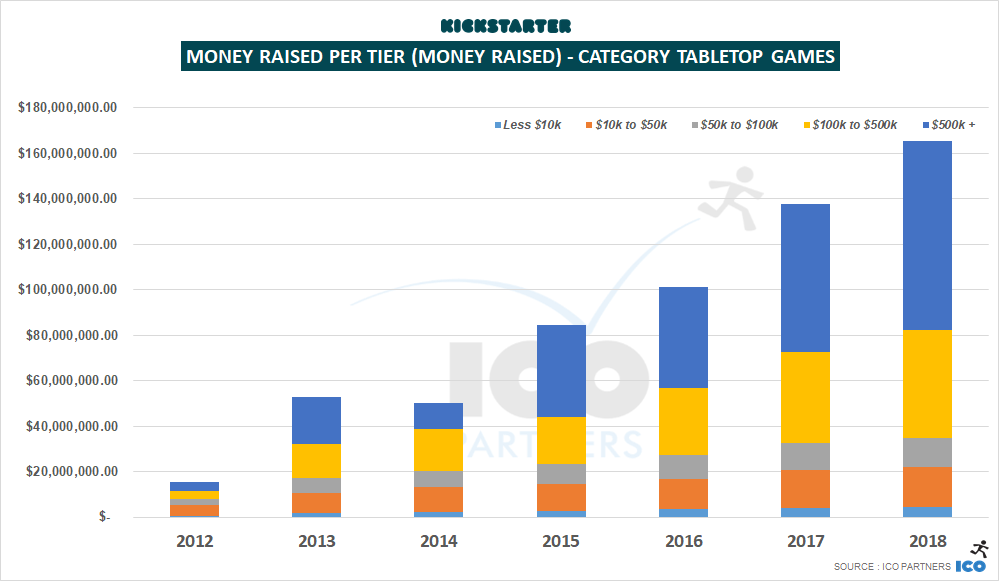 In 2018, there were exactly twice the number of projects raising $500k+ on Kickstarter in the Tabletop Games subcategory, from 34 in 2017 (a large number to start with) to 68.

What is also interesting is that the number of funded projects grew in all the different tiers of funding. There are more Tabletop Games projects of all scales succeeding on Kickstarter. 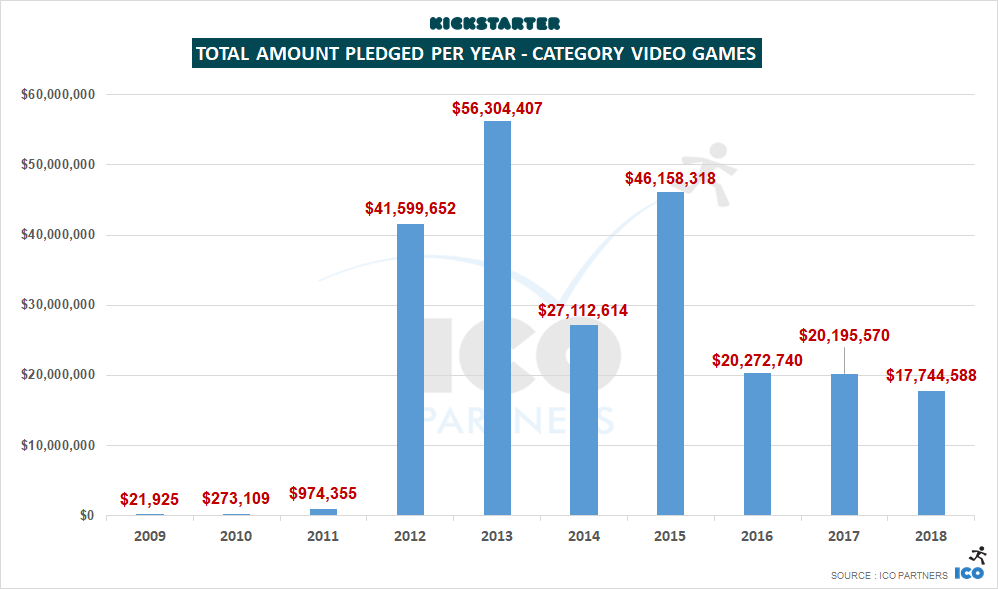 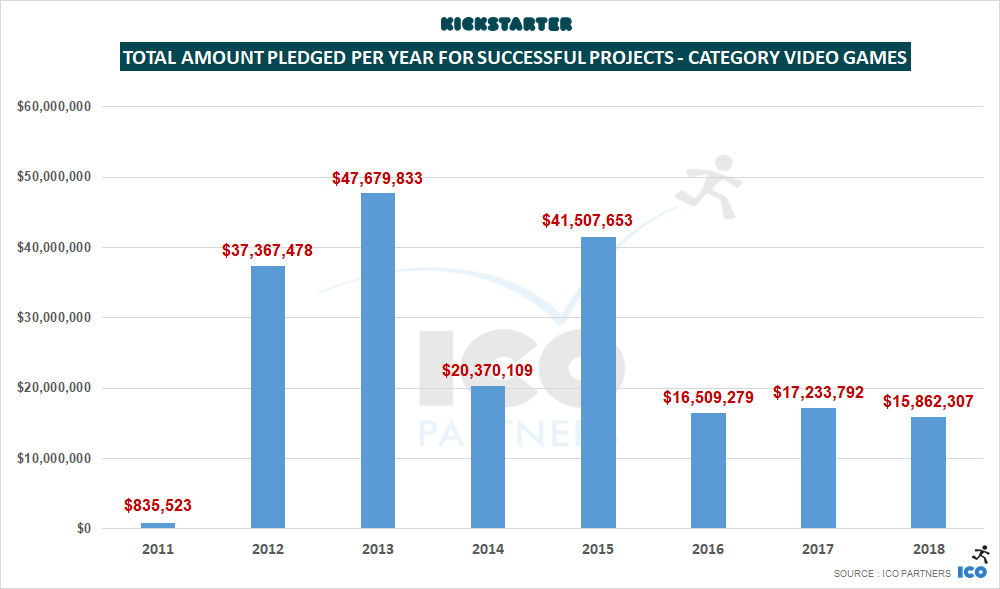 With $15m successfully raised for Video Games on Kickstarter in 2018, this is the lowest the subcategory raised since its explosion in 2012. This is, however, not a massive drop in funding. In the past 3 years, the amount of money raised in this subcategory has stayed in the +/-10% range. Considering how it can be hit driven, with massive projects weighing heavily on the total amount raised during a year, this doesn’t seem to be the sign of a downward trend. 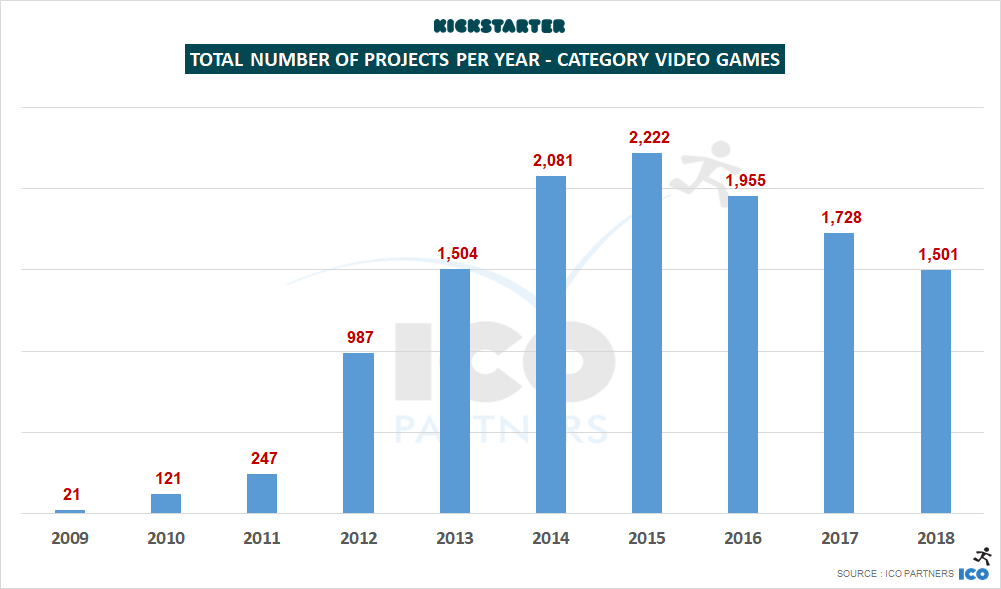 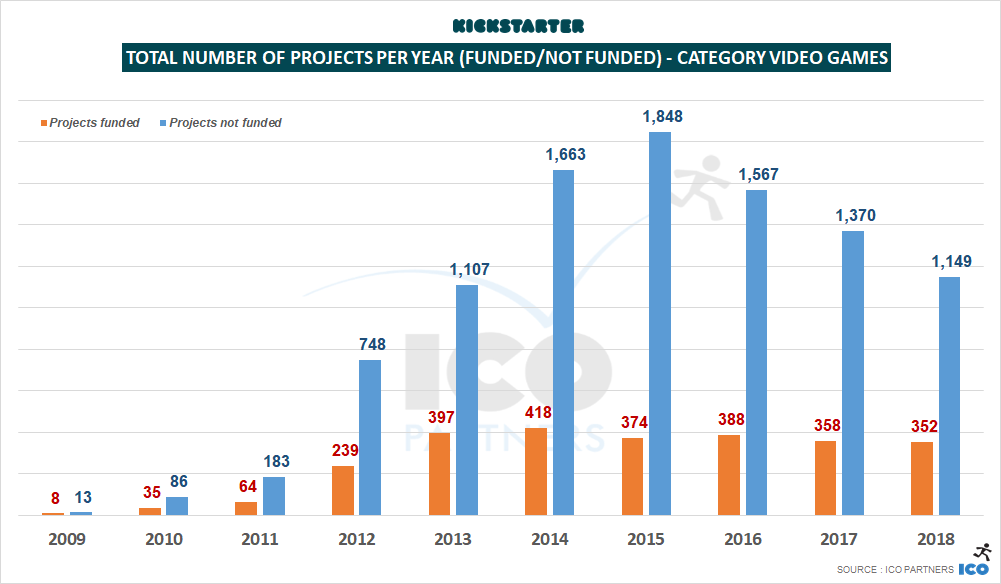 What is a proven trend, is the drop in the total number of projects submitted here again: -15% year-on-year, the third year in a row with a double digit percentage drop.

The total number of projects funded is stable still though, reinforcing the platform-wide trend of fewer low quality projects trying their hands at crowdfunding there. 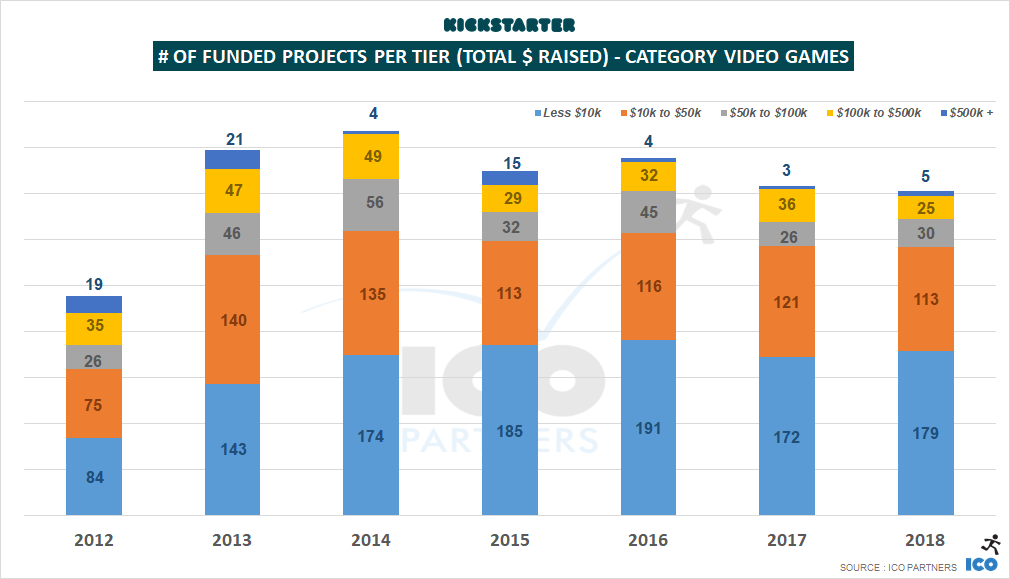 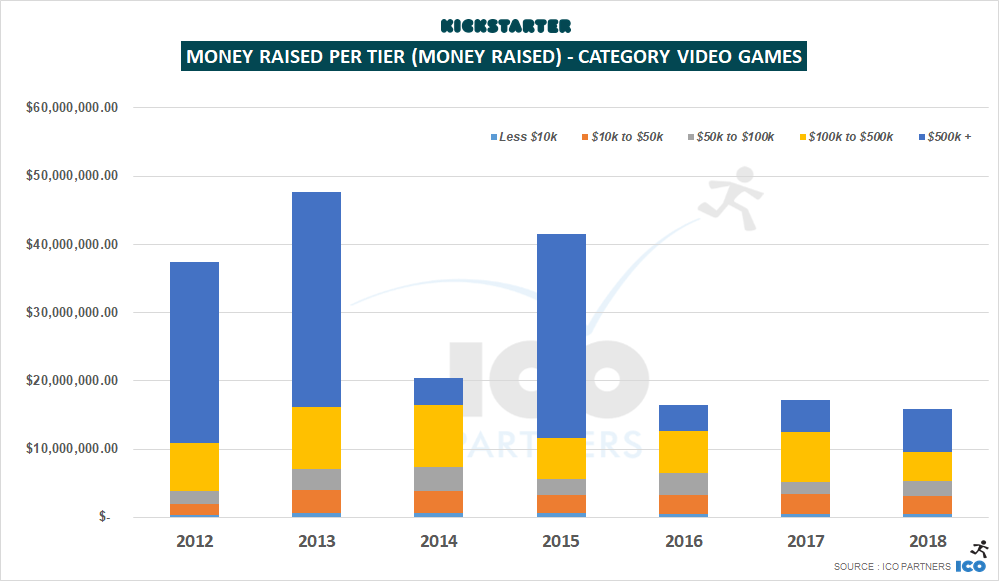