Game developers optimistic about growth, less so about the industry itself, says new IGDA survey of game dev professionals -- which also touches on quality of life, diversity, and opportunity.
Christian Nutt
Blogger
August 03, 2015

The International Game Developers Association has released preliminary results from its annual survey, which finds that diversity is important to respondents, they're more optimistic about the industry's growth potential than the industry itself, and that quality of life is getting on the right track.

According to the IGDA, just 41.6 percent of game developers have a positive perspective on the current state of the game industry, with 24.9 percent neutral and 33.5 percent negative.

66.5 percent of respondents rated diversity in the game industry somewhat or very important, with 16.4 percent rating it unimportant. 71 percent see it as important to game content as well.

The IGDA got these results from surveying 2,932 game industry professionals; the organization also prepped a handy infographic, included below. Full results will be released at the IGDA's Leadership Summit, which takes place from September 2-3 in Seattle. 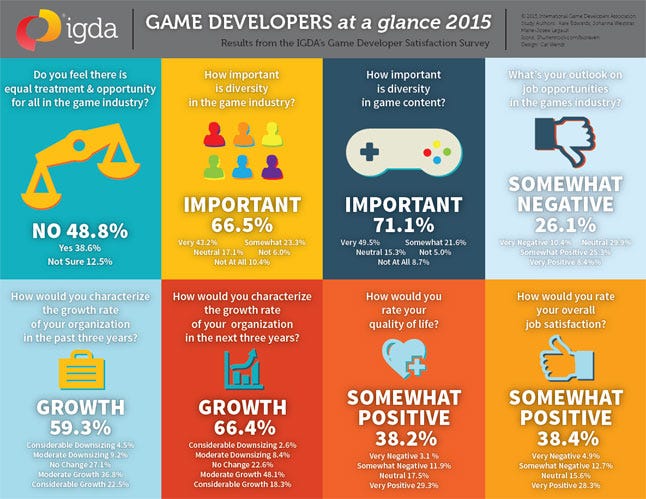