Epic's Cliff Bleszinski offered up a set of flashcards representing types of developers and the arguments they make -- and Gamasutra's community responded with a set of its own, and we here present the best and most interesting examples.
Game Developer
Staff
September 24, 2012

In August, Epic Games design director Cliff Bleszinski submitted a list of "game developer flashcards" to Gamasutra -- a taxonomy of personalities and situations he's encountered over the course of his 20 year career.

"I've learned that while developers are incredibly intelligent, they can sometimes be a bit insecure about how smart they are compared to their peers," Bleszinski wrote. "In short, this article identifies communication techniques that are often used in discussions, arguments, and debates among game developers in order to 'win' said conversations."

The article garnered a tremendous response -- 71 comments, as of this writing -- and after taking a look at them, we decided to round up the best into a second installment of the article. Below, you'll find a second set of "flashcards" contributed by the community, with fresh illustrations by Juan Ramirez, who provided the art for Bleszinski's original article.

Your Design Chocolate is in My Art Peanut Butter. When an artist is disagreeable to incorporate a meaningful player feedback device, such as a visible wall or some other element, because they fear its incorporation will upset the visual composition of their work -- even though both in concert should result in a superior gameplay experience. - Ara Shirinian

Agile in Name Only. The producer who misuses Agile terminology, but never uses Agile development. The project ends up with a traditional waterfall dev cycle, but everything is horribly mislabeled. - Matthew Henry

The Do Nuthin'. Someone on the team that does nothing other than pass along your reports. - Aaron Cassillas

That's Not What [Blank] Is! A designer who would disagree with a non-Newtonian gravity mechanic because that's not what gravity is. - Matthew Downey

Trust Me, I'm the ____. When an artist, programmer, or designer uses their superior knowledge within their own field to avoid adding an element that may grow the scope within their department. - Tyler Coleman 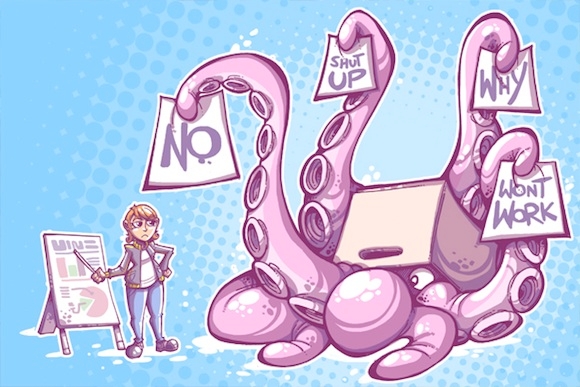 The Box Dweller. Someone who immediately dismisses an idea because it wouldn't work within some other (often easily changeable) current constraint in the game.

Example: "We could never let you throw more than one grenade! The explosion overdraw would kill the framerate!" - Aaron San Filippo

Some of the comments, of course, built directly upon concepts introduced in the original article. The following four, in fact, describe personalities -- and their techniques -- that specifically counter some of Bleszinski's examples.

Dying on that Sword. The dev who refuses to back an idea, no matter what. Passively (or actively) works to prevent its success, even when the rest of the team is moving forward. Is often a response to ideas from The Prophet or The Gardener. - Curtiss Murphy

The Pesticide. The person who did not like The Gardener's idea in its earlier stages, and will now do anything they can to keep it out. - Tyler Coleman

The Anti-Prophet. The evil opposite of The Prophet who simply knows -- but has no reasons -- the idea won't work. If you ask why, (s)he'll reply with "You didn't think it through enough," when the truth is (s)he hasn't thought it through at all. - Matthew Henry

General Patton. The opposite of Analysis Paralysis. "A good plan violently executed now is better than a perfect plan executed next week." Though it's always good to think things through, too much thinking can be harmful. It's good to ask yourself: "Am I thinking about this aspect too much/little?" - Jan Stec 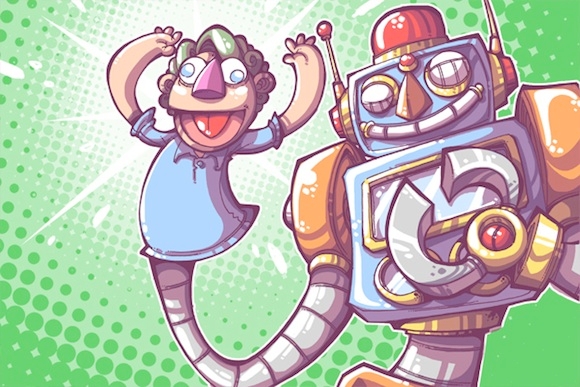 The Puppet. This particular developer has a role with responsibility to the game, but allows him or herself to be pushed around by people above them (who haven't played a game since Minesweeper.)

Their team implements designs that no one agrees are even the slightest bit decent. Sometimes they've got a hand so far up their ass the design team can't even suggest alterations to improve an idea without getting snapped at. - Sean Watson

The Eternal Percolator. The person responsible for approvals who simply says "I'll think about it and get back to you" for all eternity, never actually approving or rejecting anything. - Matthew Henry

The Skull Build. A programmer who knows the mechanics and code base of a game by memory. Given a glitch (s)he will often immediately and matter-of-factly point out the source. When this programmer's computer crashes and an hour of code is dropped, (s)he nonchalantly re-codes it over the course of the next 10 minutes. - Matthew Downey

God's Eye Designer. When a level designer tends to build the topography of a space to favor readability from their own eye and pre-informed perspective, as opposed to a player's eye and naive perspective, usually resulting in a space that is difficult for players to read, interpret and internalize.

You can see this in Skyrim all the time, where otherwise uncomplicated maps, especially from a top view, are quite difficult to avoid getting turned around in repeatedly, e.g. the Dark Brotherhood's sanctuaries. - Ara Shirinian

It Didn't Work in the Paper Prototype. Designer who focuses too much on the paper prototype, and refuses to believe it can work in a digital form. - Tyler Coleman

It's All About the Meetings

If you work at a game studio, there's no doubt that a big portion of your working life will be sucked away by meetings -- some of them totally pointless, of course. The next five definitions speak specifically to personalities and phenomena that arise from this harsh reality.

The Man Month Eater. A person who always turns what should be five-minute meetings into 60-minute ones by constantly going off on tangents unrelated to the meeting's purpose. - Aaron San Filippo

IQ Drop. When a bunch of intelligent people all get together in a meeting and suddenly the IQ drops and nothing gets done. - Aaron Cassillas

Compulsive Scheduling. Scheduling formal meetings even for very small matters that could be resolved by a quick one-minute chat at someone's desk. - William Ravaine 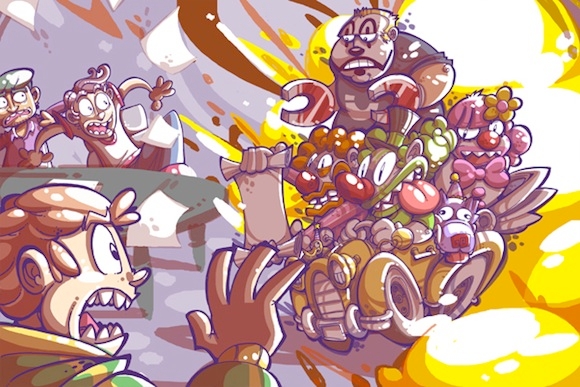 Clown Patrol. A bunch of the wrong people in a meeting decided on a feature they know nothing about. Usually accompanied with the sound of circus music when they walk by. - Aaron Cassillas

Instant Expert. A designer who, participating in a meeting, assigns themself the mantle of expertise in the genre of game that you are working on by virtue of having "played a lot of these kinds of games". - Phil O'Connor

Omnipinion. A developer who tries to agree with everyone. - Matthew Downey

Selective Deaf Guy. The person who insists that the audio department dramatically increases the volume of whatever thing he's working on (new weapon, destructible object in the environment, whatever) even though it throws the rest of the game's mix out of balance. - Mark Kilborn

First Runner Up. An idea that only gets approved because it came after a crazy idea that got rejected. - Jay Anne

Concept Art Dragon. An artist who makes the 3D art exactly like the 2D art, knowing full well it would never work out technically. - Aaron Cassillas

The King of Persia. A creative director (or other King) who maintains an air of silence about any sort of creative framework in regards to what they want while lowly designers pitch ideas Scheherazade style until something magically sticks. Some designers may have their heads forcibly removed in the process. - Jason Weesner 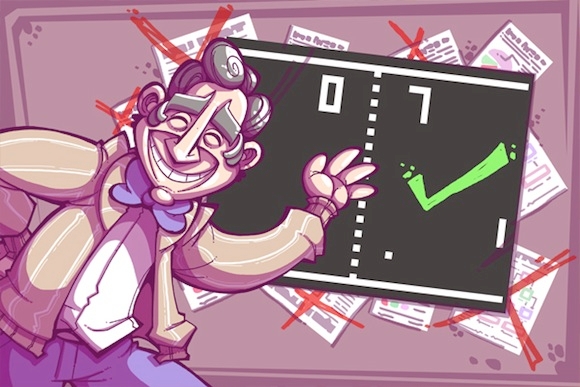 The Kindergarten Teacher. Someone who dismisses any idea that would be supposedly too complicated for the "lowest common denominator" of the game's target demographic. - Aaron San Filippo

Let's Try It. Someone who does not have good arguments for their idea and simply says "come on, let's try it" to override any counterarguments. - Juha Kangas

Soldier with Headphones. The person, usually a designer, who insists on having big, exciting music for whatever area of the game they're working on. This is requested without consideration for how music is paced and contrasted throughout the level -- and the game as a whole -- and is often a crutch for bad design. Bad gameplay will always feel at least a little better with great music underneath it. - Mark Kilborn

Drank the Kool-Aid. When the entire team suffers a shared delusion. An outsider starts to suffer that same delusion once he joins them. - Jay Anne

The Deflector. The guy who refuses to take responsibility or suggestions for his own work, citing mysterious but non-specific external sources as the reasons. "Look, I agree this thing I implemented kinda sucks, but I'm just doing what the powers that be tell me to." - Aaron San Filippo

There's Always Room for Jell-O. Typically used by a lead designer (or producer). They "deprioritize" a desired feature below another in the hopes that the required resource wants it in so badly they'll work it into their schedule. - Alan Wasserman

The Lazy Web Addict. 9 am coffee, chat, 9:30 sit at desk and fire up internet. By the time they've gone around all the usual web sites, it's time to update TwitFace, then oh, it's lunch time! After lunch, it's time to have a look at Gamasutra, and post a comment or seven. - Dave Hoskins 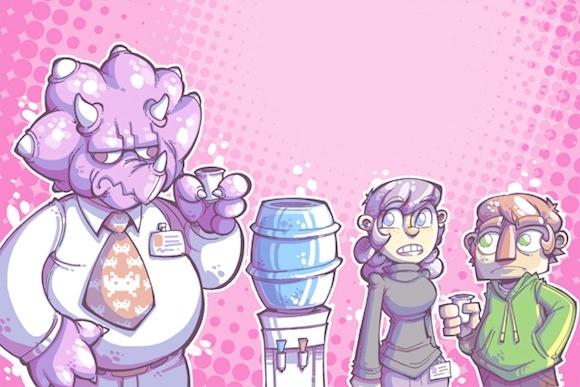 The Dinosaur. That guy who's been in the studio since before you were born but never really moved up the corporate ladder, and categorically refuses to work on stuff he is not already familiar with. This refusal to adapt and evolve can often lead to extinction. -William Ravaine

Pulling a Scotty. When an engineer says X feature is going to take days, but does it in 10 minutes. - Aaron Cassillas

Toxic. When an idea that backfires so bad that it gives cancer to other similar ideas, even ones that could have been superb. - Jay Anne

Never Surrender (in a War of Attrition). A behavior of finishing what's started no matter how costly, inopportune, or impossible. - Matthew Downey

Choose Your Battles. A mentality of getting meaningful and feasible tasks done at record pace. The opposite of "Never Surrender". - Matthew Downey

The Guilty Saint. The one who reads articles such as these, chuckles, and says, "I've met these people in my career" -- without admitting to the fact that "My God. That's me." - Abhishek Deshpande