My name is Scott and I am the Senior Data Analyst at Edge Case Games working on the early access 5v5 space combat game, Fractured Space. Recently we ran a Free Weekend on Steam and I have compiled stats/analyses on how the game performed over this period.
Scott Davis
Blogger
April 08, 2016

Hello, my name is Scott and I am the Senior Data Analyst here at Edge Case Games, working on Fractured Space. Fractured Space is a 5-v-5 team-based space combat game, currently in Early Access on Steam.

I am in charge of combing through the millions of rows of data the game is generating each day. With this data I work with the entire studio to help highlight any game imbalances we can immediately spot, as well as deriving the behaviour of the playerbase so we can work to make the game more enjoyable and engaging based on how we see players are playing the game.

At the end of January we had run a Free Weekend on Steam. Following that weekend I had pulled together various stats and analytics on how the Free Weekend went down – how many new players joined us? How long were these New Players sticking around for? Which ships were people unlocking? How were these ships performing in the hands of players in-game? How many players were quitting out of games and when?

Before I start delving into particular areas of analysis, let’s take a look and some of the top line numbers from the Free Weekend:

So, let’s dive into some deeper analysis of the game and how people were playing, starting with the group that made up the majority of our players over the weekend – the New Players.

We said earlier that around 132,000 new players had joined the game over the Free Weekend. So how long were these new players sticking around for, and where were they dropping out?

Let’s start by looking at the below graph (graph 1.a), which shows how many new players got to each step of Fractured Space’s Onboarding – the game’s opening experience for all new players, from booting up the game all the way to starting their first match.

The graph below takes into account that the game’s Proving Grounds tutorials are currently optional and so new players can skip them altogether if they want to.

It is not uncommon in games to see the number of players drop off over time as they move through a game’s onboarding, especially when the game is free and can attract any number and types of new players. 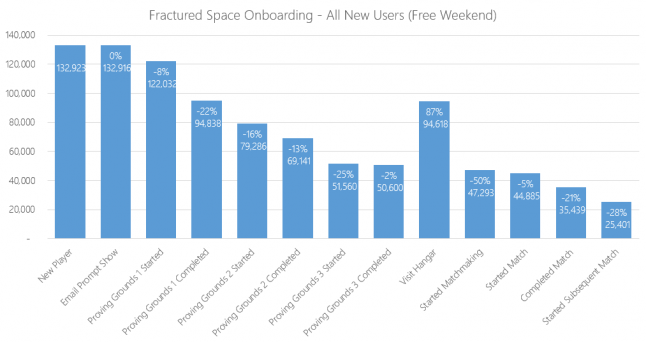 The level of drop-off is quite significant in Fractured Space at this time. Ideally, from the point a new player boots up the game to them starting their first competitive match, you would like to only lose no more than 25% of players along the way (ideally 0% but we can’t all get what we want). In Fractured Space over the Free Weekend however, we lost around 66% of new players during player onboarding which is not all that great.

A particular focus on where we are losing these players lies within the largest stage of our onboarding journey, the tutorials. The good thing about the current tutorials is that they are having a positive effect on new players that come out having completed all three – of the 25k new players that started a second match during the free weekend, around 85% of these players had completed the tutorial. This has backed up a decision we’ve recently made on making the tutorials a mandatory step of the onboarding, limiting the number of new players that are getting to their first match that don’t know what they are doing or how to play the game.

However, with around 95% of new players starting the first tutorial, the larger problem is that not a high enough percentage of players are completing them. During the free weekend we lost 60% of new players that started the first tutorial by the end of the third tutorial which, following our previous rule that we would like to only be losing no more than 25%, is far too high.

We’re losing a good portion of new players during the tutorial, so let’s take a deeper look at these tutorials and see where players are dropping out in the below graph (graph 1.b).

This shows the number of players that get to each objective in each of the three tutorial levels (each colour representing the 3 levels) and the % drop off from the previous step. It doesn’t look all too smooth or sequential as most objectives can be completed in a non-linear order or are optional altogether. 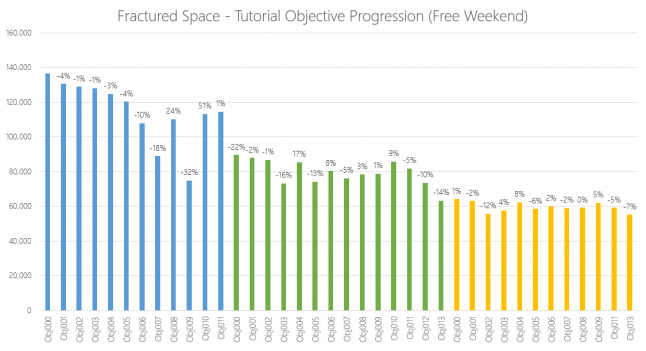 Beyond the optional or non-linear objectives, the highest drop off in a single step is between the end of the first tutorial and the start of the second, where a drop off of 22% of players is seen. However, those new players that do start the second tutorial do remain relatively engaged, were we only see a 38% drop off from the start of the second tutorial to the end of the third – which is closer to the drop-off rate we would consider more ideal, but still too high. What this clearly shows is that we need to be doing more to encourage people to stick around following the first tutorial, including making the first tutorial more engaging as well ensuring the tutorial rewards are clearer for new players, driving as many as we can through to the end of the third tutorial.

We have been working hard on designing and planning improvements to keep new players more engaged and ensure that as many new players as possible are making it into a match. The first step of this will be a more polished onboarding experience for new players that will, of course, become mandatory for all new players (which is a very good thing for all players old and new).

Ships & the New Tech Tree
Prior to the Free Weekend we carried out a complete reset of the game’s Tech Tree, wiping all players’ progress including ship and loadout unlocks. This levelled the playing field somewhat for us and was a great opportunity for us to see, following the influx of new players during the free weekend, how players fresh to the game were engaging with the tech tree and which ships were the most appealing to them.

First off let’s take a look at the below Heatmap graph (graph 2.a), which shows for all ships when they are being unlocked and in what quantity.

Let me explain the heatmap in a little more detail. Each horizontal row represents the order in which a ship was unlocked, so the first row signifies what each player had unlocked first with the darker, redder patches showing what ships the most players were unlocking first. The same applies for the second row, showing what ships players were unlocking the most second and so on. There are players that have unlocked more than 12 ships by now, but in too small of numbers to be counted as a significance in the larger picture.

What the heatmap shows us, when taking a step back and looking at the whole picture, is the journey the average player is taking through the Tech Tree:

Next up, let’s take a look at how long players are having to play before their next ship unlock. Below you will see a graph showing the average number of matches players are playing between Ship unlocks.

The below Bar Chart (graph 2.b) shows the average number of a matches players are playing between their 2nd, 3rd, 4th unlock and so on.

As you can see, between unlocks 2 and 6 we see a slow climb in the number of matches a player takes part in before having enough resources to unlock their next ship. This type of exponentially increasing number is something we want to see. As soon as we see a player that can on average unlock their 8th ship in less games than their 6th ship, then we know that there is a potential imbalance in the tech tree. The numbers get a bit more erratic from Unlock 7 onwards, but with a smaller number of players getting to this point over the Free Weekend, the averages become less representative of the wider playerbase than those steps before it.

Calculating a basic trend those first 6 unlock stages are showing is, a player who can stay consistent on average would have to complete 429 matches to unlock all 23 unlockable ships. However this would probably end up being much less if a player was to improve their Credits and XP yield over time through their performance.

The next steps for us, upon seeing what ships people are unlocking, in what order, and how long it is taking them to unlock these ships, is to validate these number against the assumptions of the designers. We’ll see if we need to make any adjustments to improve overall tech tree balance, and ensure players aren’t getting through all of the game’s content too quickly – and not having to over-grind for any particular position on the tech tree.

This is just a breif look at some of the analysis we are pulling together for Fractured Space. Whilst having only worked at Edge Case Games for three months now myself, I was overwhelmed with how much everyone on the team strives to know how their game is performing at a deep level all the way from key metrics to deep behavioural analysis. We will continue to drive a data-aided culture on Fractured Space and seek out any and all improvements that can be informed through the use of data.

I hope you enjoyed the article. What is great about sharing articles like this is having other people spot anything i might have missed in the data. Please reach out to me if you have any questions or leave a comment below that i will try and answer.