We talk to Question, made up of Jordan Thomas, Kain Shin and Stephen Alexander, about The Magic Circle, and how it exposes the frustrations of game development.
Phill Cameron
Blogger
June 05, 2015

As many of our readers may know, the "magic circle" is the theoretical barrier that stands between a virtual world and the real world--it's the space within which the magic of play takes place.

Most of the time (but sometimes not), video games try their best to keep players in the game--this is apparent in how obsessed we can get when it comes to "immersion." But The Magic Circle from game dev studio Question quite beautifully dances along the broken edges of that namesake theoretical barrier.

The game is a dark comedy that puts players in the shoes of a hero within an unfinished, in-progress fictional remake of a (also fictional) classic text adventure game--it's a game about creating games, and all the frustration that comes with it.

As in game development, approaching a problem in The Magic Circle is never a simple process. From the beginning of the game the fictional developers in the game world have removed your ability to fight, or do much of anything but walk around.

"There is some catharsis on giving voice to some of the contradictions and difficulties inherent in making a certain kind of game, one with rich systems and a story to tell."

And so you instead have to invert and pervert the world around you, delving into the code to rewrite the functions of different entities. It’s a way of parodying game development from the micro level, while the context and conversation of those fictional developers provides the meta-commentary that lampoons the struggles of game development as a whole.

It’s hard not to think, as you move through the world that Question have made, that all of this is the result of some frustration emerged out of working on games where the central conflict of The Magic Circle, that of systems vs. story, was present. And, talking to Question developers Jordan Thomas, Kain Shin and Stephen Alexander, that was no small part of their intent.

“There is some catharsis on giving voice to some of the contradictions and difficulties inherent in making a certain kind of game, one with rich systems and a story to tell,” says Stephen Alexander, who worked with Jordan Thomas on both Bioshock and Bioshock: Infinite. “It happens that we have each spent a fair amount of our lives working on games like that, and we felt that it was ripe territory for a dark comedy. There is always a tension, and that tension is fertile ground for conflict and creative paralysis, which we have all experienced.”

“We didn’t set out to air grievances,” says Thomas. As well as working with Alexander on Bioshock and Bioshock: Infinite, he was the creative director on Bioshock 2.

“Having worked for years on games that took themselves 110 percent seriously, we originally intended TMC to be very light, a palate cleanser," he adds. "The tone was playful almost to the point of being superficial. But then 2014 happened, and the comedy was suddenly coupled with tragedy almost under its own power – writing about the way that these artificial worlds affect those who build them, and those who explore them started to demand a little more artistic backbone.” 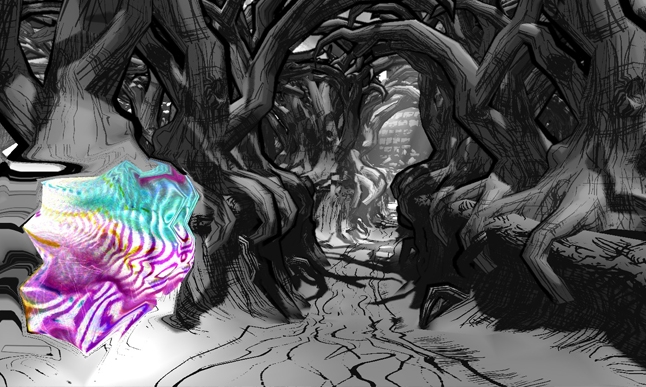 Making a "broken" game that works

It’s here that The Magic Circle is often at its best, where it examines the relationship between the public, revered single game developer and the audience that is so eager to see the next thing they produce. The world of The Magic Circle is incomplete, abandoned iterations littering the game world that itself has half-finished levels and remnants of previous design meetings. It creates an interesting tension for the team at Question, then, as they try to emulate the incomplete without, y’know, being broken.

“Good game design and polished systems had to come first,” says Kain Shin, who came to Question after working on the AI core of Dishonored. “It is already a risk to market a game as an incomplete game made by bad designers; we did not want the actual play experience to feel buggy, incomplete, or badly designed. The systems in the game needed to convey a language clear enough to allow the player to confidently synthesize solutions that they can own.”

The game's premise does offer its own opportunities, though. “The theme of incomplete game design with multiple reboots did afford us the luxury of including many different abilities that would not make sense to coexist in standard lore. The context of the game being intentionally broken by the player also freed us from any notion of trying to preserve game balance. This freedom is liberating in some ways, but it also required that we replace the core aesthetic of game balance with some other ambient value of progression that the player would find equally meaningful if not more so.”

Thomas agrees “In almost any other game, that would be a poor balance curve. A lot of people expected TMC to force its themes (borrowed from myth, about creators jealously guarding their powers and wanting to keep mere mortals out) more consistently to the foreground, verbally. But I think that would have been hugely dishonest – we’ve deliberately gone the other way - letting you live it, actually manipulating the rules, and becoming more like a real designer in the process. No mere words on the subject, within an interactive framework, can 'speak' as clearly as the player’s own growth and fluency with the systems.” 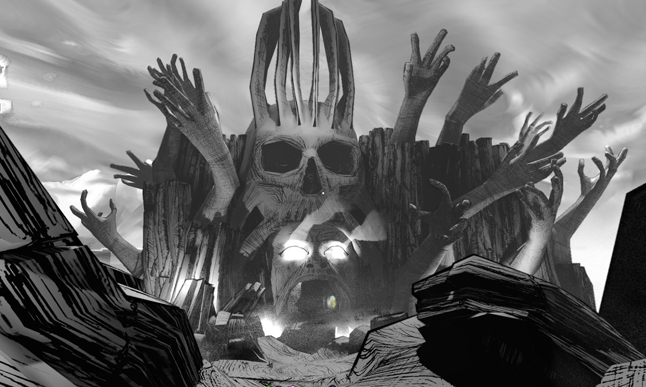 Then going ahead and making a game centered around the idea of being incomplete, only to release it initially as an Early Access title, is either clever marketing or a recipe for disaster. But according to the team, that only made them even more diligent about making sure it was as close to a complete experience as was possible. In the end, it turned out to be just something that needed to be done.

“We decided that if we felt we had done everything we could to make the game buggy in only the ways we intended, then it was only by exposing it to the infinite permutations of actual players that we could find the rest.” Alexander says. “Our resources didn’t allow for the massive hours of QA that a game like this demands, so the thing that was most important was to make sure that the experience we put out was complete, that we weren’t releasing half a game. We know there would be hard to find bugs, but we refused to allow obviously incomplete content.”

"Something we had to be very particular about was what flavor of 'broken' was ok."

Although what constitutes "obvious" in a game where the aesthetic is one of incomplete content is a difficult one to pin down. This applies to the systems, too. The method of solving puzzles in The Magic Circle is to subvert the systems the fictional developers have created, doing things that their game shouldn’t technically allow you to do. When you can strip the "fly" verb away from a flying enemy and apply it to your own allies so you have flying monkey-dogs, how can a developer even hold onto the concept of "broken" and "intended"?

“Something we had to be very particular about was what flavor of ‘broken’ was ok,” Alexander says. “We want people to find ways to get outside the sky, to break the game in ways most games would do anything to avoid. However, with systems that don’t function well, or breakage that undermines the narrative, we were careful about catching and fixing whenever we could. We also had to find ways to undermine certain combinations in various scenarios so that there wouldn’t be one solution that could be applied game-wide, as that would just be boring.” 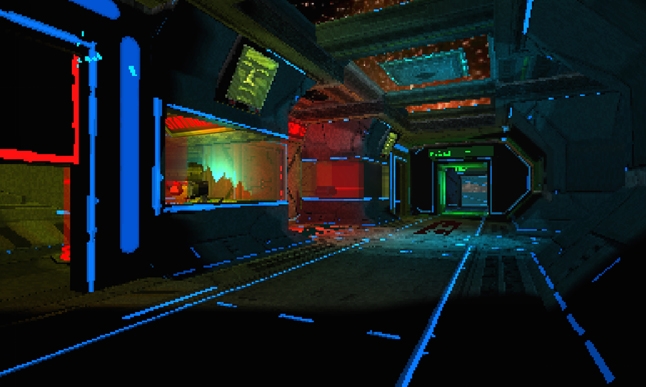 This also applied to the internal consistency of the world, something that Thomas could use to help players get in the right mindset.

“Our attempt at harmony has been to use the language of software in development (textual chatter between fictional devs) to offer general hints about the possibility space of a given area," he says. "And secondly, when our real players surprise us with an inventive solution that looks ugly or unclear, we try to ratify it, call it ‘canon’ and support it with design work that will remain pretty invisible to the next person who tries it – but will improve the feedback that yes, you beat us, keep thinking out of the box (but secretly moving the walls of the ‘box’ to incorporate that thought). Said aloud, it’s very nearly a contradiction in terms, but it’s working.”

All of this contributes to the overall feeling that The Magic Circle is something chaotic--messy in the right way, but still messy. It’s expressive from both sides, with the player exerting their creativity on the broken puzzles that Question has created, and Question itself pouring all its frustration and development bugbears into the game world so that they can finally be aired, instead of confined to conference rooms and whiteboards.

“The demons in The Magic Circle are manifestations of ourselves, more or less.” Shin explains to me. “Some of those demons will remain trapped in the game while we move on with our lives. Others will probably follow us into future endeavors in case we come across new demons that only the old ones can kill.”

"The demons in The Magic Circle are manifestations of ourselves, more or less."

Thomas sees it slightly differently. “Perhaps because of the singular purpose that a lot of young game developers feel, the conversations between extreme points of view during the development of a game can verge on caricature," he explains. "The poles of that axis are often about the primacy of Story vs Play. And near-violent conflict can emerge between people who think Games should be one or the other, and nothing else. Ish Gilder, the fictional writer and project director, is definitely an exaggerated and crystallized embodiment of the resent over players and player behavior that I had as a narratively-biased game dev, coming up.

“Great people in games writing struggle legitimately with the limitations of the medium, and when they critique player narcissism, sometimes they have a point," Thomas continues. "Ish articulates a little of that, so he’s not entirely cartoonish. But there are also a lot of hacks who use the low, or childish reputation games have among writing circles, as an excuse for their own shortcomings. The frustrated screenwriter who wrings his hands every time the player sabotages some brittle scripted moment they slaved over. Constantly threatening to quit the industry. As a demon, perhaps the most ironic punishment I can devise for him is to trap him in a video game, to watch the player seize control from him, over and over, ad infinitum.”