Electronic Arts' most recent earnings results paint a picture of rising fortunes, with both revenues and profits on the rise as digital continue to eclipse physical in terms of how EA games are sold.
Alex Wawro
Blogger
July 27, 2017

The earnings are out for Electronic Arts' most recent fiscal quarter, and the numbers paint a picture of rising fortunes, with both revenues and profits on the rise as digital continue to eclipse physical in terms of how EA games are sold.

For the three months ending June 30th EA reportedly reaped $743 million (GAAP) in profits for the quarter, up from $560 million a year prior.

But what's more interesting is the revenue from which those profits were made, and how it breaks down sales-wise. EA reported net revenues of $1.45 billion for the quarter, $879 million of which (or roughly 61 percent) was generated by sales of digital goods like games or in-game transactions.

That's a bit more than the same quarter a year prior, when the company reported roughly 54 percent of its $1.27 billion in revenue was from digital sales. EA chalks the change up to a boom in its "live services" business (see below), which include things like subscription fees for the EA Access program and micro-transactions in games like Mass Effect: Andromeda.

"We had a great start to the fiscal year, primarily due to our event-driven live services," EA CFO Blake Jorgensen stated in the earnings release "Our operating cash flow was the highest ever for a first quarter, and underlines how live services have fundamentally transformed our business model."

That said, the company is forecasting a $57 million loss for its current quarter, which ends September 30th. This may help account for why the company's stock value has fallen slightly in after-hours trading, despite today's generally positive earnings results. 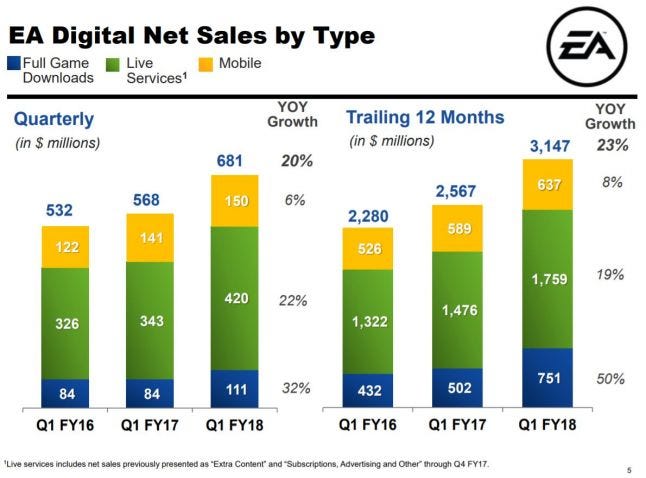