Here, Daniel Mullins tells us a bit about how he put The Hex together, from his creative process to the challenges of constructing a game that covers so much design ground.
Simon Carless
Blogger
November 20, 2018

Daniel Mullins suddenly came to prominence in indie development for his unique and metafictional game Pony Island back in 2016.

Now he’s released The Hex, another mysterious and multifaceted game that includes sections from wildly different genres: point-and-click adventure, platformers, fighting games, top-down shooters, Japanese-style RPG, turn-based tactics and first-person puzzle-solving, to tell a cohesive story, in a way like Six Characters In Search Of An Author. (Six Game Protagonists In Search Of A Developer?)

It’s already become a hit, gaining a Very Positive rating on Steam at over 100 reviews and a laudatory review from RockPaperShotgun.

Here, Daniel Mullins tells us a bit about how he put The Hex together, from his creative process to the challenges of constructing a game that covers so much design ground.

My process, if you can call it one, is very haphazard! I think it's something I could improve upon going forward. I seem to acquire a handful of exciting ideas that pop into my head while I'm not working. I try to think about how this or that idea will fit into the overarching structure of the game but, ultimately, if it gets me excited then I force it to fit in somehow.

Eventually I construct a playable section of the game that is far more than a prototype (it usually has final art assets, sound, etc.) but is still a rough draft. Much of the cohesion that The Hex seems to have comes from making fairly large edits to the rough draft.

This is a process that happens over a long stretch of time with a lot of playtesting and reflection. A lot of the foreshadowing and tying together of various story elements happens in edits.

I used Unity for both The Hex and Pony Island. This was the perfect tool for The Hex as it easily supports the development of both 2D and 3D games. 2D games in Unity are really just 2D assets sitting on a flat plane in a 3D scene. So it really isn't much of a technical hurdle to have 2D and 3D scenes in the same game; I think it isn't done as much due to convention.

As for easing the development of multiple genres, I was able to share things between the chapters like the dialogue system, the point-and-click interaction system, save file system, etc. However, the differences between the game genres included in The Hex were great enough that they all required plenty of unique systems and code that only served the purposes of a single chapter/genre.

This was a lot of work! It was eased to a degree by my experience doing smaller games and game jams. I have made turn based tactics games, platformers, shooters, and RPG's before. 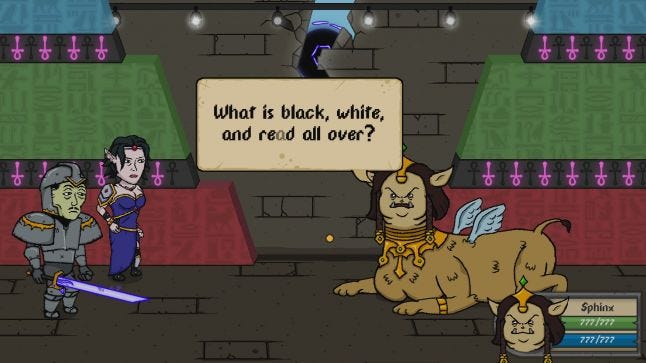 I really enjoyed making the Final Fantasy-esque RPG as well as the turn-based tactics game within The Hex. There's something that I find immensely satisfying about creating little bits of data such as items, upgrades, special moves, etc. I could make little icons with associated stat boosts and special powers all day... Why do I make narrative games instead of roguelikes?!

I think the two chapters that would work best as their own games would be Rust's chapter (turn-based tactics) and ???'s chapter (first person puzzle game similar to The Witness). Both had the potential for interesting mechanics that were far from being exhausted by the ~1 hour segments they got in The Hex. I'd be especially excited to continue creating Waste World, the post-apocalyptic turn-based tactics game.

I pulled a bit of (fictional programmer character) Lionel Snill's character from my own experience but he's largely a fictional creation. This was different earlier in the ideation process. I imagined that the character would directly represent me and his name was going to be "Lienad Snillum" (my name backwards).

As more details fell into place his character drifted a bit and I renamed him. I wouldn't want to be mistaken for that guy in his final incarnation, haha. I do find that writing for a game developer character comes very naturally to me. 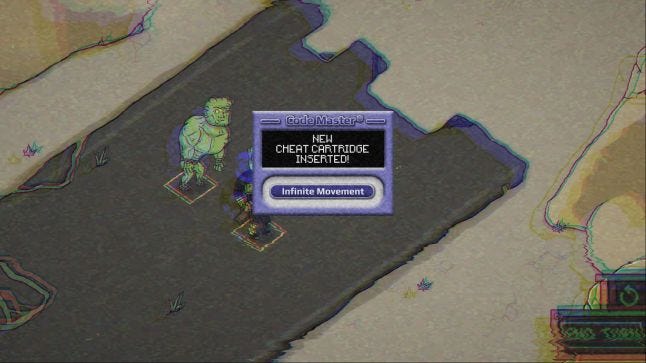 I'm not sure if putting secrets in a game is especially risky. It's true that no one player will find them all and that some may never be found if the community isn't dedicated enough. But the experience of the player can be made much more exciting even by uncovering a single secret. It can make the player feel like there's a secret around every corner if they are observant enough.

There are ways to create this kind of intrigue without blowing the budget with extra art or sound assets. Sometimes a simple line of cryptic text can create a sense of mystery and the desire to start digging.

I'm a bit concerned about datamining ruining the secret-hunting experience and have took some basic steps to prevent it. I was more naive when creating Pony Island and included the final secret in its own Unity "scene" file. This made it extremely easy for a hacker with some knowhow to boot up that specific scene without getting to it through the intended flow.

This time the deeper secrets are embedded within existing scenes. I have also taken some precautions to obscure certain sensitive strings. All that said, even if things are spoiled a bit by datamining the secret hunters are often eager to uncover things the proper way.

On steam versus consoles for The Hex

As most gamers and developers know, being on Steam is sort of mandatory for PC. It gets so much more traffic than any other PC digital distributor that you would be crazy not to put your game on it.

I think its algorithms have favored me for Pony Island. I still get plenty of players referred to the store page from elsewhere on Steam. As for The Hex, it remains to be seen.

I would love to have my games on consoles, especially the Switch. However, both of my games require a lot of pointing and clicking and this is hard to translate to gamepads. For this reason it's unlikely that Pony Island or The Hex will end up consoles. I'm interested in making a more universal control scheme for my next game!