A 2015 sign of the times: Apple highlights games that let users "enjoy hours of uninterrupted fun" if they plunk down cash up front.
Christian Nutt
Blogger
February 13, 2015

In what can only be called a sign of the times for 2015, Apple has launched a promotion on the iOS App Store titled "Pay Once & Play" -- for games that aren't free-to-play.

In other words, paying and then playing -- and getting to "enjoy hours of uninterrupted fun with complete experiences," to use Apple's marketing text -- is rare enough to require some explanation.

That bears out with the reality, of course. While there are some major paid hits on the App Store (the Five Nights at Freddie's franchise springs to mind, and of course Minecraft) the service has long been dominated by free-to-play games. On today's iPhone top-grossing chart (as tracked by App Annie) the first paid game, Trivia Crack's ad-free edition, slots in at number 23. It's number-one in the paid game charts.

A year ago, in-app purchases already accounted for 81 percent of revenue on the App Store.

A screenshot of the promotion (taken from the U.S. App Store on an iPhone) is below. Thanks to Paolo Pedercini and Bennett Foddy for the tip-off on Twitter. 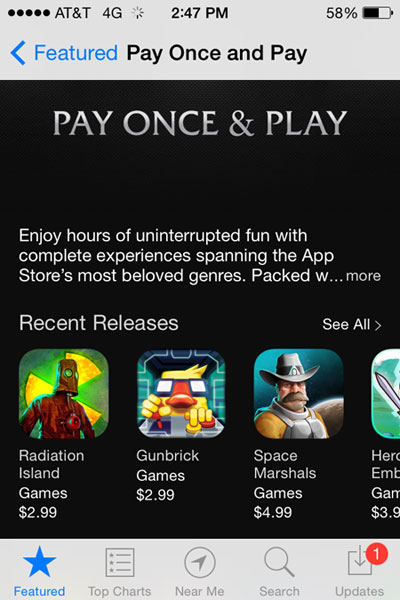