Game industry analyst Piers Harding-Rolls of Ampere Analysis offers up a quick overview of PlayStation 5's standing and possible future as we head into the next generation of game consoles.
Kris Graft
Publisher
September 16, 2020

Game industry analyst Piers Harding-Rolls of Ampere Analysis offers up a quick overview of PlayStation 5's standing and possible future as we head into the next generation of game consoles.

Sony has announced the launch date and pricing of its next-generation console, PlayStation 5 and has also revealed new big hitting AAA games that will be coming to the platform including a new God of War and Final Fantasy XVI which will be a console exclusive for 12 months. Sony also announced PlayStation Plus Collection – an instant collection of leading PS4 games for PS Plus subscribers that purchase a PS5.

As has occurred in previous years, there is a slight staggering of the console launch day between different regions and country markets due to logistics. The initial launch taking place on Thursday November 12th in the US, Canada, Japan, Mexico South Korea, Australia and New Zealand. The rest of the world will follow on Thursday November 19th including Europe, Middle East, South America, Asia and South Africa. Mainland China and India will follow at a later date.

An exclusives strategy that supports sales of the PS5

Sony is following the same strategy that delivered a resounding success during the PS4 generation. It is centering its strategy on games and exclusives made specifically for the new platform, and allowing those games to fully utilize the latest technology included in the PS5.

With Microsoft playing the long game and retreating from the traditional product strategy of releasing exclusives for a new console, Sony has an open goal with the launch of the PS5. It has rightly identified this as a key competitive strength and is expected to push the message of ‘games built specifically for the PS5 platform’ heavily in the run up to launch. In the context of selling next-gen consoles this factor clearly gives Sony a substantial advantage, although Microsoft would argue that its approach is more consumer friendly, focused on the gamer and about keeping its audience engaged.

According to Ampere Analysis data, at the end of Q2 2020, the installed base of PS4 (all versions) stood at 111 million, Xbox One (all versions) at 51 million and Nintendo Switch (all versions) 57 million. Sony has built a formidable global brand in PlayStation over the last 25 years. While Microsoft will be more competitive next cycle, especially in the key battleground of continental Europe where the company lost ground during the Xbox One cycle, the PlayStation brand still resonates more strongly than Xbox outside of the US and UK markets where the situation is more balanced. This is unlikely to dramatically shift during the next cycle however strong Microsoft’s positioning is. Our current outlook is as follows: 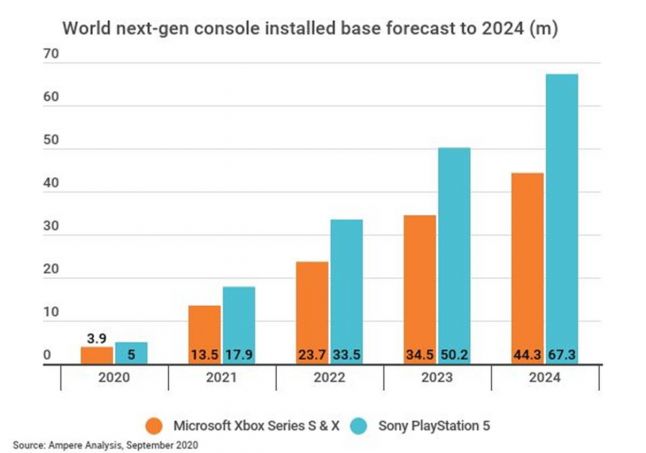