Amazon's bid for the living room: The $99 Amazon Fire TV

Fire TV is based on Android and HTML, and Amazon says that a "huge selection" of apps and games are already on the way for the device.

Amazon's Peter Larsen said that games consoles these days are too expensive, and that his company is looking to fill the void between proper gaming on your TV, and a price point that is affordable -- hence the $99 price tag. Mike Frazzini from Amazon Games subsequently took to the stage to talk about which devs are already on-board. Ubisoft, Take-Two, Disney, Gameloft, EA and Double Fine were all named, while Minecraft, The Walking Dead, NBA2K14, Asphalt 8 and Despicable Me: Minion Rush were highlights of the 100+ games Amazon claims are available on the platform at launch. The company also promises that thousands more games are coming to the Fire TV in the coming months, once the Fire TV app is released and touch-optimized games are made available. Frazzini then revealed the Fire Game Controller, a $39.99 gamepad that comes with some Amazon Coins currency to get you started. Games will apparently cost around $1.85 on average. 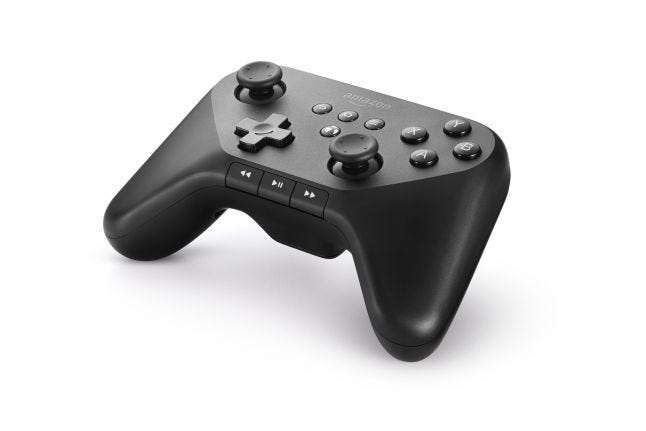 He then demonstrated how the controller works with the device by booting up a Fire TV-specific port of Minecraft and giving it a quick play. As for original IP, a third-person shooter called Sev Zero was thrown up on screen. It's apparently the first game to come out of Amazon Game Studios, Amazon's own internal game development group, and Amazon says there are plenty more Fire TV games in the works.

Sad news for our U.K. editor: Amazon has confirmed that the Fire TV will only be available in the U.S. for the foreseeable future.

The Fire TV is only being sold in Amazon's U.S. store right now, though company representatives would not commit to saying that it will never be available in other regions. Gamasutra heard last year about how Amazon was preparing game developers for its upcoming living room device, which will no doubt be competing with other similar Android-based microconsoles like the Ouya and the MadCatz M.O.J.O. in the months to come.
Console
Get daily news, dev blogs, and stories from Game Developer straight to your inbox
Subscribe