SEARCH
A minimum of 3 characters are required to be typed in the search bar in order to perform a search.
Announcements
Event
Free Webinar on 5/24: How Predictive Analytics Drives Mobile Conversions & Boosts Revenue - Register Here!
PreviousNext
Business
11 min read
article

Aesthetic-Driven Development: creating Merchant of the Skies from announcement to Early Access launch

In October 2018, I’ve told her, Helen, to just draw whatever she wants and put it on twitter. Ten months later, we have published our game, Merchant of the Skies, our best game so far, into early access. It is a direct result of that decision.
Vladimir Slav
Blogger
August 21, 2019

Despite developing games full-time for three and a half years already, I am still discovering the best approach that I want to take while developing games. I run my studio together with my partner Helen, who makes the art for our games.

In October 2018, I’ve told her, Helen, to just draw whatever she wants and put it on twitter. Ten months later, we have published our game, Merchant of the Skies, into early access. It is a direct result of that decision. I’m going to tell you how this helped us make the most successful of our games so far.

October, 2018. I’m finalizing our previous game, Rebel Story, port to consoles which mostly requires code changes and not much art assets. Helen does not want to idle so we decided why not, let her just draw things she likes and just put it to her twitter / portfolio in case it helps her to land some contract work later.

So she drew Octobit and Pixel Dailies images. The results have been varying.

Some pictures were well received. It made me think: what if we can use them as a style/concept for a new game?

Not all images are drawn equal though. If we try to put them in the game – we need to make sure that we can effectively create the assets of the same style. The temple on the left has distinguishable art style that is reproducible. The tweet with the ruins to the right got way more likes, but it is super-detailed, so it means that we’ll need way more time to draw similarly-styled sprites.

Side-note: for every game we decide to work on, there are 6 prototypes on average that did not work.

As soon as we agreed that “we can do something with that temple”, the mockup /  concept / mini gif production process started. There was no game at that point.

Example of a gif that we made. Took roughly 4 hours for me to program in Unity.

In the end, we made three tweets to see if the style resonates well.

All three tweets were well-received (based on our own standards). That made me think that “self-marketable” style could be a great asset. I suck at marketing so if the images make people want to reshare them, then we are on to something.

This is how Merchant of the Skies really started. I’ve had an idea of the sky-faring strategy game before, but I could never come up with a proper gameplay. This aesthetic style had its own constraints and actually enhanced my creative process. Essentially, this style gives following limitations:

In the end, we decided to have a world map and different island hubs (each <6 different buildings/tiles) that player can visit. Each of those hubs either offers a base / company that player builds or some world event / quest.

Sounds easy in hindsight, but it took me quite some time to figure out how I want it to play. To me, gameplay should always win over style/aesthetics. If the game is not fun to me, then I scrap it.

So we’ve decided on the gameplay, but the game is not yet announced. We are in the process of making playable prototype with minimal asset amount to make a store page. Some people advise _not_ to post anything on twitter until you announce the game. We are a smaller team without large reach, so I’ve decided against this approach and essentially started putting most of the things that we were coming up with. Helen’s twitter audience grew from ~500 people in October to 1200+ people in February. Coldwild Games twitter account also started to see gradual organic increase in audience. It’s not a huge amount (we were under 2k) at that time, but some people who followed the progress closely started to appear.

On Mar 7, we were ready. Steam page has been published, we’ve made two separate tweets at different times, sent press-releases (mostly ignored) and made reddit / imgur posts that got minor traction. 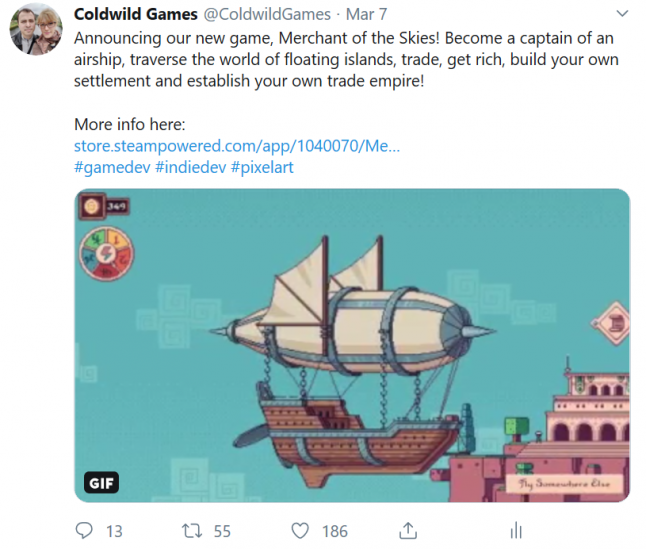 Helen’s tweet got more attention than mine so I’m still jealous about it, but it became clear that twitter should be our main source of announcements at that point. Everywhere else there was not much traction.

Gifs work much better than images.

Now, another curious thing is the Wishlist graph. We got a bit more wishlists that we wanted before the launch (slightly over 5k). It did not look like it would work out until our second trailer announcement and things also got better after summer sale and right before launch. Anyway, the chart and spikes: 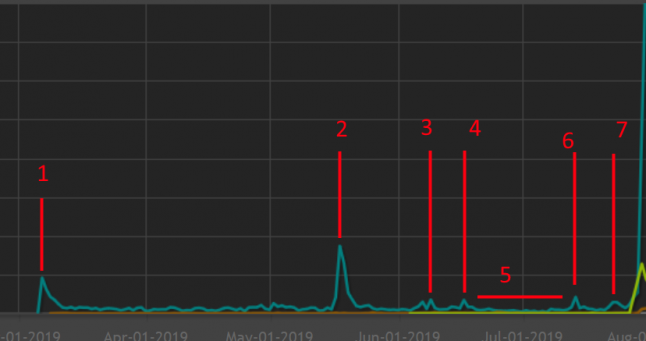 To make it short:

Basically no secret formula here. Hard work at making content pays off. But it does take a lot of time. Roughly 30% of development time went into preparing social media posts / addressing the audience / spreading the news.

To make it short: you already need to know what you are doing and have a vision of your own. I had the work of my studio planned beforehand, but I needed (and still need) sanity checks when it comes to the details. I.e. handling the marketing / press / pricing / working on game design. Lottie, Alexis and Claire has been able to selflessly help me out with that.

Apart from that, all of them provided informational support (such as retweets / mentions), even though they did not have to. It has been a substantial help over our own marketing efforts.

In any case, I can highly recommend finding yourself a mentor (after you are sure you want to go pro and actually finished a few smaller games to at least understand what you need from the mentor).

In case you want to learn more about Weather Factory mentorship, you can read about this on their website.

Two weeks before the release, things get hectic, so I always have a checkbox of things that I want to do. This release was no different. The timeline for me this time:

One week before launch:

Overall, I’ve sent >150 keys to youtubers and streamers and set an embargo on Release Date, 30th of July. 4 people broke it, but I reached out and asked to unlist the videos until the date and we actually resolved things peacefully.

The stream started a bit earlier than we’ve pressed the release button. Helen was there to talk to players (and JÄÂÂÂÂÂÂnis and MatÄ“js from Rocknight studios). I’ve been keeping tracks in other social media and responding to them.

The ads went in for 1-2 days. I mostly posted them for my facebook followers and their friends to see and to a small related subreddit. Ads are not very effective by themselves for lower-priced games (or so I think), but they can help with the traffic burst at first.

All in all, HAVE THE CHECKLIST, you will be panicking / stressing out too much and the to-do list absolutely helps.

We did not get into trending. I don’t think the results / coverage was enough. Over the first week, we sold ~2.5k copies. Not great, but enough to keep us going to actually finish the game while paying ourselves minimal salaries and not worrying about taking up freelance tasks just to sustain ourselves while making our dream game.

In short (and to a surprise of noone), the youtubers / twitch streamers remain a driving force of sales. The bumps on the graph match the US workdays (most of our audience), but are also noticeable  we had our game covered by a larger youtubers (this could be an article by itself). I’ve used Keymailer to accept the request and also wrote personalized email to the ones I like (or just to a bigger ones).

Rock-Paper Shotgun mentioned our game twice (the review is actually well-written and mentions the games flaws without actually fixating on them too much). We had a small bump of sales because of it, but youtubers affect it much more. In any case, for us it was not about the sales but about the principle: it was an honor to be mentioned in a famous gaming magazine. Something that seemed unreachable for us before that.

The release has shown that players are expecting more content, but I’m happy with the level of polish that we had on launch. My own principle is to make the game feel as good as possible for Early Access and expand horizontally afterwards. Basically it’s better to have one polished level rather than two unpolished ones.

Right now I’m mostly working on content updates, but first games were different: catching and addressing bugs as soon as they pop up and answering community (>50% time).

Even after two weeks post-release, handling community discussions / answering the feedback still takes 25% of the work day. It is a hard work, but it’s very rewarding to get the bug reports and improvement suggestions. We are very grateful that people give us chance to make the game better.

I think I’ve already surpassed the proper word limit, so all I’m going to say is that we will continue working on Merchant of the Skies and make sure players are going to get the best possible experience on full launch. Thanks to all that made it possible and I hope you’ll enjoy the game even more when it’s done.

Stay tuned for a full-release post-mortem after the game is done and shipped fully.