This month the U.S. Patent & Trademark Office granted Activision a patent on a "system and method for driving microtransactions in multiplayer video games" by, among other things, matching "junior" players up with "expert" players in order to encourage the less skilled player to buy in-game items.

As Rolling Stone aptly points out, it's yet unclear how (or if) Activision has implemented this matchmaking tech in its games.

But even if it never puts this patented tech to use (as is the case with many game industry patents), the way Activision's system works to entice players into paying for digital power-ups is intriguing -- especially since the game industry is currently roiling with concerns over how big-budget games can effectively (and ethically) be monetized with microtransaction opportunities like, say, loot boxes.

According to the filing, Activision has patented a matchmaking system capable of conventional tricks like matching players of online games based on their performance, level, or some other status signifier. It can also "arrange matches to influence game-related purchases. For instance, the system may match a more expert/marquee player with a junior player to encourage the junior player to make game-related purchases of items possessed/used by the marquee player."

Gamasutra has reached out to Activision for further details on how or if this system is meant to be implemented. In the meantime, the rest of the patent is well worth reading in full, and we've taken the liberty of embedding it below.

Update: When reached for comment, an Activision representative sent the following statement regarding this patent:

"This was an exploratory patent filed in 2015 by an R&D team working independently from our game studios.  It has not been implemented in-game." 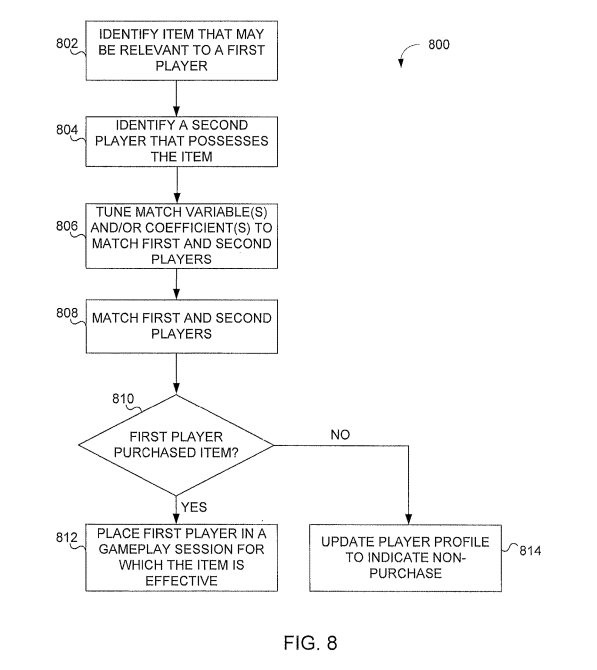