The company's third quarter results were better-than-expected despite a decrease in total revenue and player engagement, as well as unexpectedly weak sales of Destiny 2: Forsaken.
Alex Wawro
Blogger
November 08, 2018

Activision Blizzard today released its financials for its third quarter ended September 30, stating that its results were better than predicted despite showing a decrease in total revenue and overall player engagement.

The company's total revenues decreased roughly 7 percent to $1.51 billion, while net income was up 38 percent year-over-year to $260 million. It's a bit of a slowdown for the company, which has reported robust earnings for the past two quarters.

The decline in total revenues can be attributed in part to Destiny 2: Forsaken, which debuted in early September. The company's revenues from console games and services dropped 34 percent year-over-year to $347 million, with the company adding that the recently-released Destiny 2 expansion isn't performing as well as anticipated.

Activision Blizzard's mobile revenue was also down 11 percent to $523 million, but balanced out partially by a 21 percent boost in PC revenues to $482 million.

The growth in Blizzard's PC game earnings is driven largely by the launch of World of Warcraft: Battle for Azeroth back in August, which sold 3.4 million copies during its first day on shelves -- a record for the franchise, the company noted. 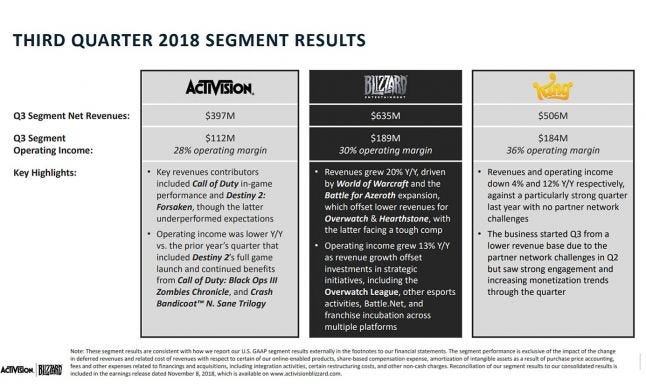